[ The Korea Herald – Send E-mail ]
[Herald interview] ‘It’s not Koreanness that matters in our story, only Batman’
Creators of ‘Batman: Moonin’ talk about their work process, introducing Korean elements that people around the world can relate to, including Korean readers
By Kim Hae-yeon
Published : Jun 7, 2021 - 14:34
Updated : Jun 7, 2021 - 15:46 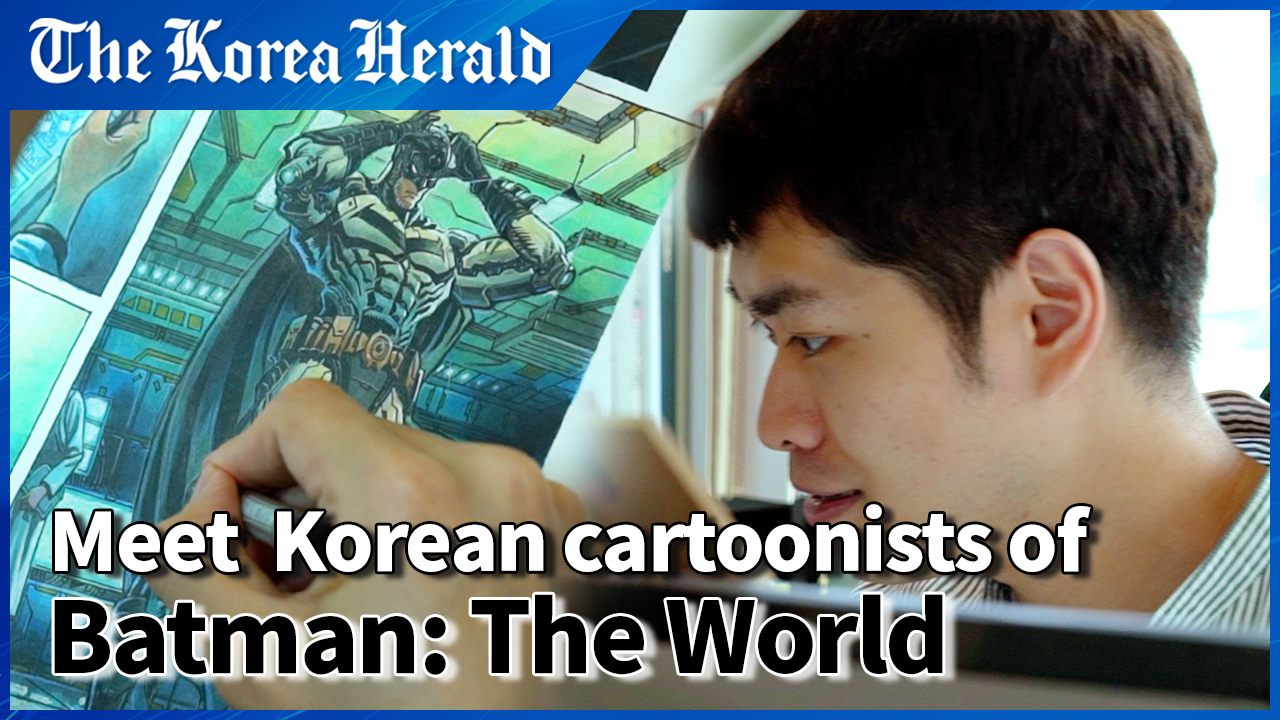 The rumors of Batman making a brief landing in Seoul, Korea, had been around for weeks, but were proven true when DC Comics officially announced “Batman: The World,” due out on Sept. 14.

“Batman: The World” is an anthology comic book in which the stage is set in 14 countries, including Korea. The writers work from their respective countries, introducing local elements into the synopsis and drawings. The Korean part of the anthology is titled “Batman: Moonin,” which refers to a memory storage device that has been stolen by gangsters.

Jeon In-pyo is a Korean cartoon translator and writer specializing in Korean translation of DC comics, who handles the plotline of Moonin. Cartoonist Park Jae-kwang, who works on US comics, French cartoons and advertisement drawings, worked on the comic together with cartoonist Kim Jung-gi. 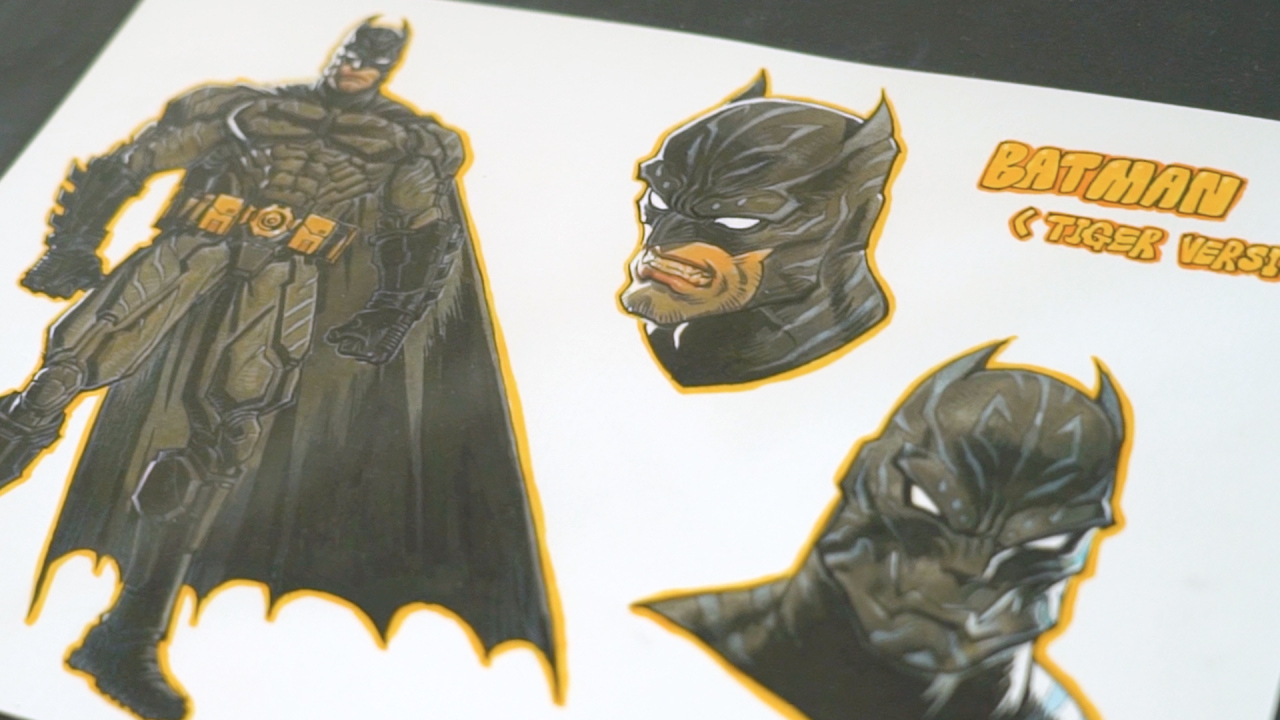 Park’s drawings of “Batman: Moonin” (Kim Hae-yeon/ The Korea Herald)
The Korea Herald met Jeon and Park, who had been pulling all-nighters to ensure Batman safely recovered the device, at a fifth floor atelier in Hongdae on Wednesday.

Although much of the storyline and characters were kept behind closed doors before the comic books’ release, the writer and the cartoonist were keen to share tidbits on the production process.

The following is an excerpt of the interview with Jeon and Park, discussing the excitement and key challenges as cartoonists working on a global series in Korea today. 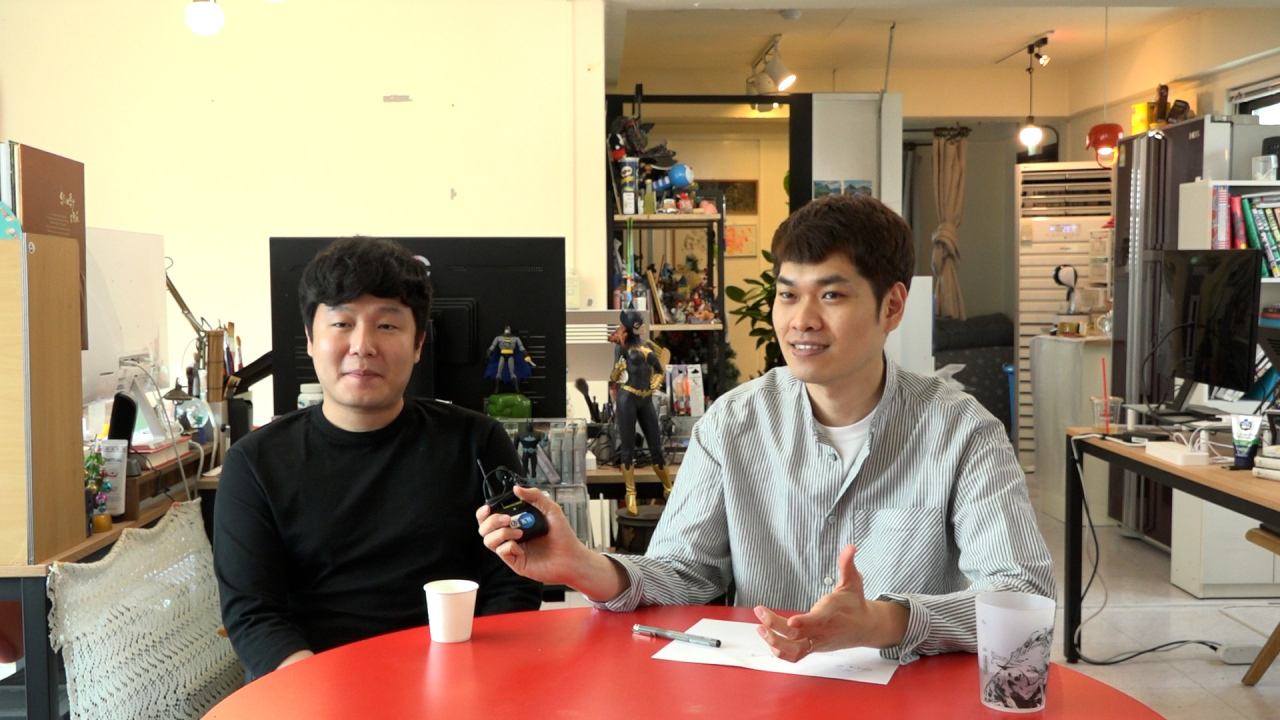 Cartoon translator and writer Jeon In-pyo (left) and cartoonist Park Jae-kwang sit down for an interview with The Korea Herald on June 2. (Oh Da-eun, Kweon Ha-bin/ The Korea Herald)
Q. How long did it take to complete “Batman: Moonin”?

Park: Actually, we were working on a feature-length Batman series (whose title and release date have yet to be disclosed), before we got the offer for part of “Batman: The World” anthology. For the feature-length, it took about a year and a half. For the 10-page “Batman: Moonin,” it took three months for the script, and one month for the drawings.

Jeon: For the writing part of “Batman: Moonin,” it took longer than I expected, because the length was limited. Had I been given 200 pages for the Moonin series, it would have been much easier for me as a writer. But the introduction, development, transition and conclusion all had to be squeezed into 10 pages. 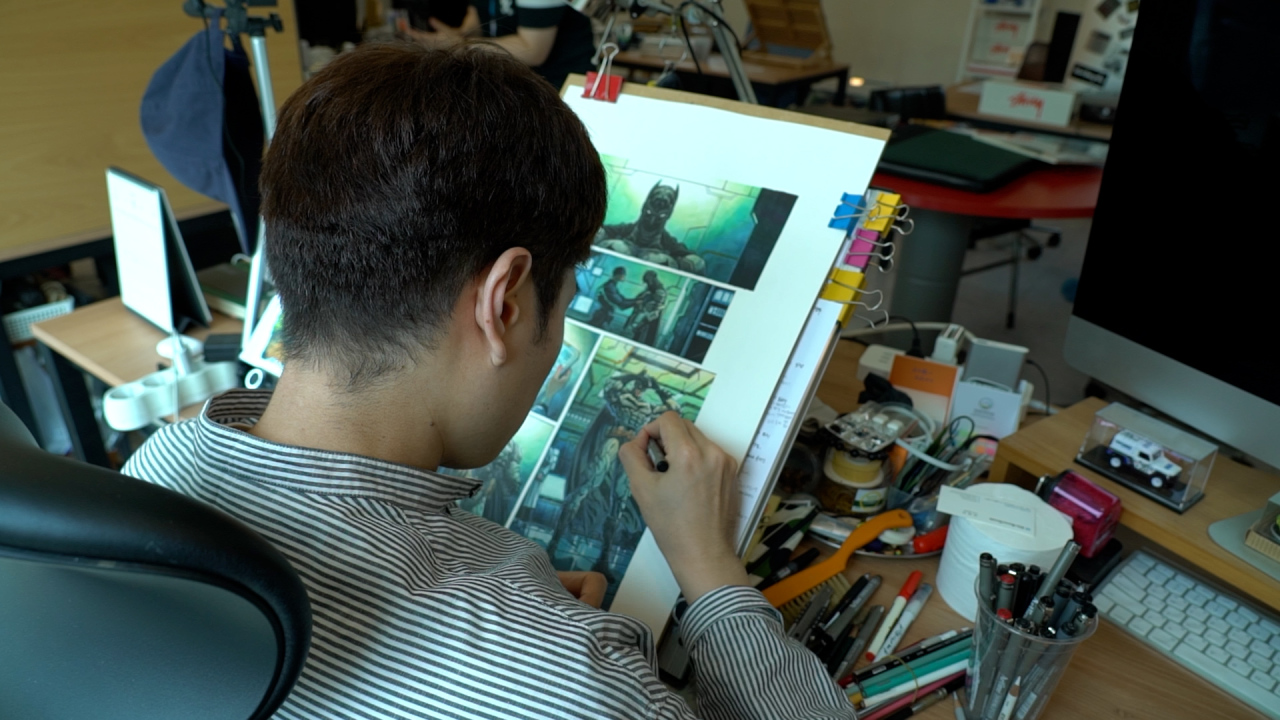 Park draws “Batman: Moonin,” focusing on the batsuit that symbolizes a Korean tiger. (Kim Hae-yeon/The Korea Herald)
Q. Fans are looking forward to the fact that the stage for “Batman: Moonin” will be set in Seoul. This factor may attract new Korean readers of Batman. How do you feel about this?

J: First and foremost, I tried to create new stories without ruining the current universe (that the Batman series offers). I think the essence of the new chapter within the existing superhero story, is to stay in line with the basic framework. Second, I had heard that other countries would be joining in making the anthology and hoped that the story from Korea would not fall behind.

P: Both of us were cautious not to portray superficial and obvious Korean elements of today, like dressing up the characters in hanbok, or randomly inserting Gangnam Style dance. Embedding these obvious elements into culture and art content are often seen as gukbbong (a Korean slang term for excessive patriotism) in Korea.

Whenever a foreign art piece comes to Korea for local collaboration, these rather uncomfortable mixtures do happen, even ignoring the original theme and concept of each work. In my view, these collaborations done in cartoons make it impossible for the works to be recognized and enjoyed, either in Korea or other countries.

Korean readers mock bluntly patriotic storylines, whereas, foreigners think of it as new and exotic, but never think the piece as being mainstream. So we decided to make our work follow the mainstream elements and then add a touch of Koreanness naturally into the story.

Q. After the cartoon script writing is completed and handed over to Park for the drawing, do you continue to communicate with each other? Or do you silently wait for the piece to be interpreted and worked on independently?

J: We have absolutely no contact after we begin our works. To be honest, I try to not communicate with the cartoonist when passing on my writing. We have enough time to discuss the piece thoroughly before the work begins. So I think making extra suggestions, to add this and omit that, might offend the cartoonist. And besides, I actually trust his work.

P: Actually, I think I do make extra suggestions, I might have offended you on that part. I think there are some good points when we are not talking a lot to each other about our work. When we were working on the “Batman: Moonin,” there was this new character called, Dr. Min. Because Min feels like a woman’s name to me, I drew her as a female character.

But I later found out that Dr. Min character was originally created as a guy. Were you okay with the change I made?

J: Yes, I actually liked it. These situations really happen a lot between a cartoon writer and cartoonist. There are times when Park draws something incredibly cool, even though I had not come up with that feature at all, on my script. Park’s own interpretation of the piece often exceeds what I had imagined. 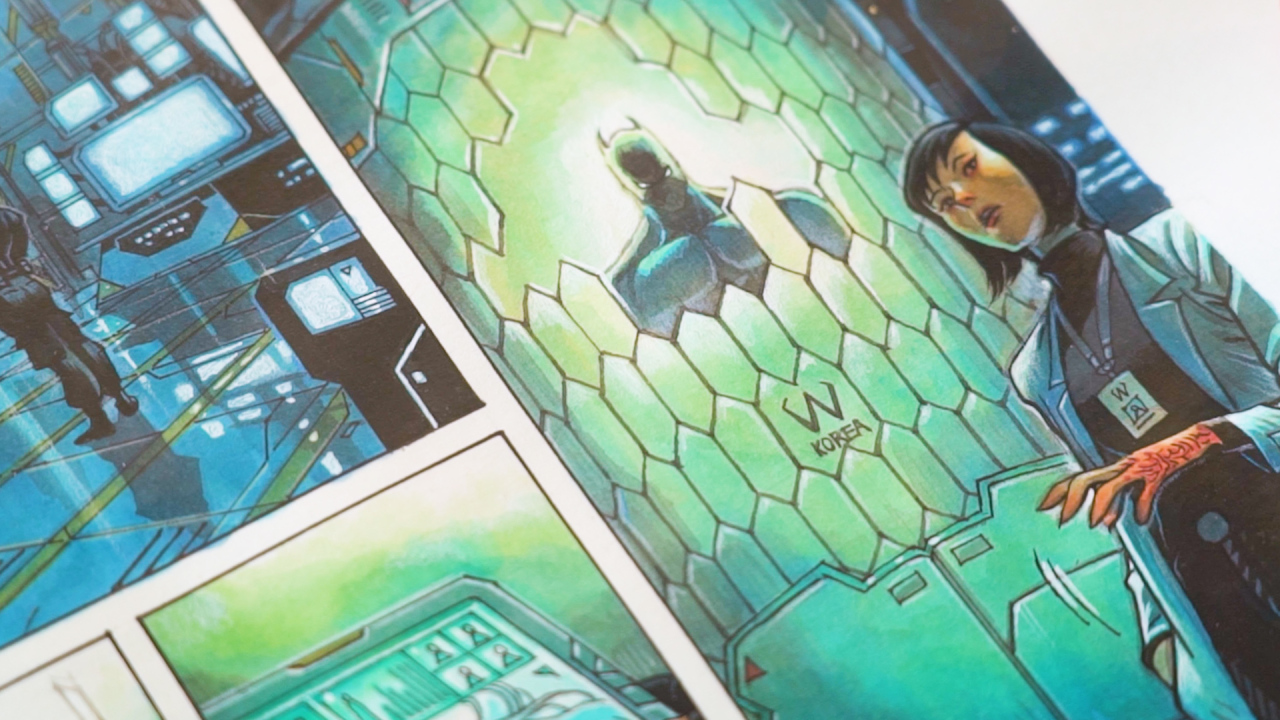 Park’s drawing of the new character, Dr. Min, in “Batman: Moonin” (Kim Hae-yeon/ The Korea Herald)
Q: The US comics’ successful arrival and popularity in Korea is a relatively recent phenomenon. What do you think attracted domestic readers to US comics?

P: I think movies have done a great deal in that regard. Just a few decades ago, Koreans were so used to Japanese comics, largely due to the culture and similar expressions in dialogues. But after superhero films became popular, US comics and their way of speaking have also become familiar to people.

J: It hasn’t been long since US comics started officially publishing in Korea. In that aspect, I guess the fan base is not yet strong here in Korea, but I can feel that people are getting more and more attracted to the universe that US comics have created. I’ve seen a lot of people, after watching movies, heading to read comic books, and I think these subcultures will gradually gain wider appeal.

Q. At the end of the day, Batman is not a Korean cartoon. My guess is that you constantly need to think of the characters and plots that appeal to the readers in a transnational way. Where do you get inspiration from?

J: I translate US comic books, and I’ve worked on some 30 different pieces so far. I was an avid reader of US comic books even before that. So when working on the Batman series, I didn’t have a difficult time looking up or searching for global features, since I was already familiar with them. One element to which I pay the most attention in every issue that I read is how the writers begin and wrap up their storytelling.

Q: What is this device called Moonin that has been stolen by gangsters?

J: I once read an article in Korean that some company or institution was developing a device that could visualize human memories. When expressing Koreanness within a story, I thought that technological development could be one theme. The most ingenious technology that I had come across in recent years was the device that filmed memories, so I chose that as a symbolic object.

P: To be honest, I did not think too much about how to visualize the device. I drew it as a micro-chip type of device. I had other things that were much more difficult to express in drawings.

J: Since we had to put a local touch on Batman, I thought adopting the image of a tiger would be symbolic. So Park shaped the original batsuit into one that resembles a tiger-like costume. I believe that process must have been very hard. 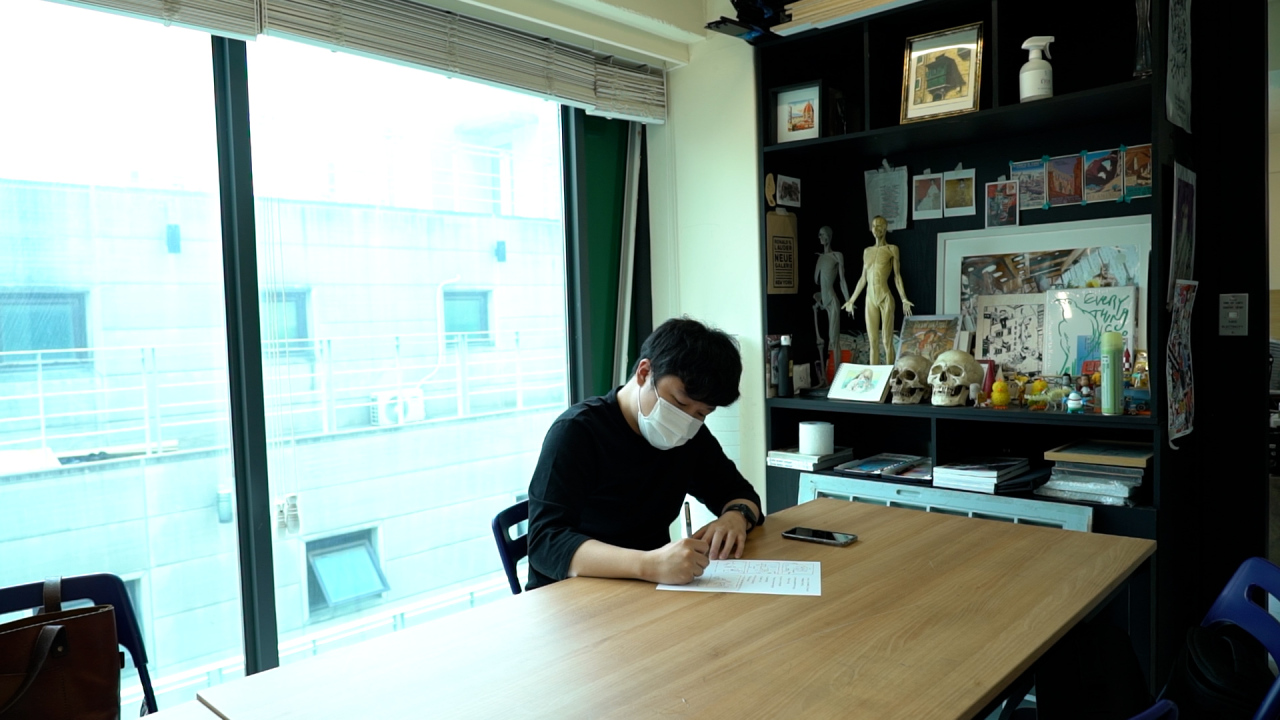 Jeon brainstorms, scribbling scripts and story boards. (Kim Hae-yeon/ The Korea Herald)
Q. If you were given the chance, which comic world would you be in, and in which character would you choose to live?

J: I don’t want to be one of the superheroes.

P: They get too much attention, don’t they?

J: Yes. And the world there always begins with much chaos. Besides, even if you become a superhero, you never know when you will die. Instead, I would choose to live as one of the characters in “The Sound of Your Heart” (a Korean webtoon series by Cho Seok). The daily routines would be so much fun and relaxing there.

P: As a kid, I dreamed of becoming a cartoonist after watching “Dragon Ball.” That series is actually the reason I got into the field of cartoons. So I would choose to live as Son Goku in “Dragon Ball.”