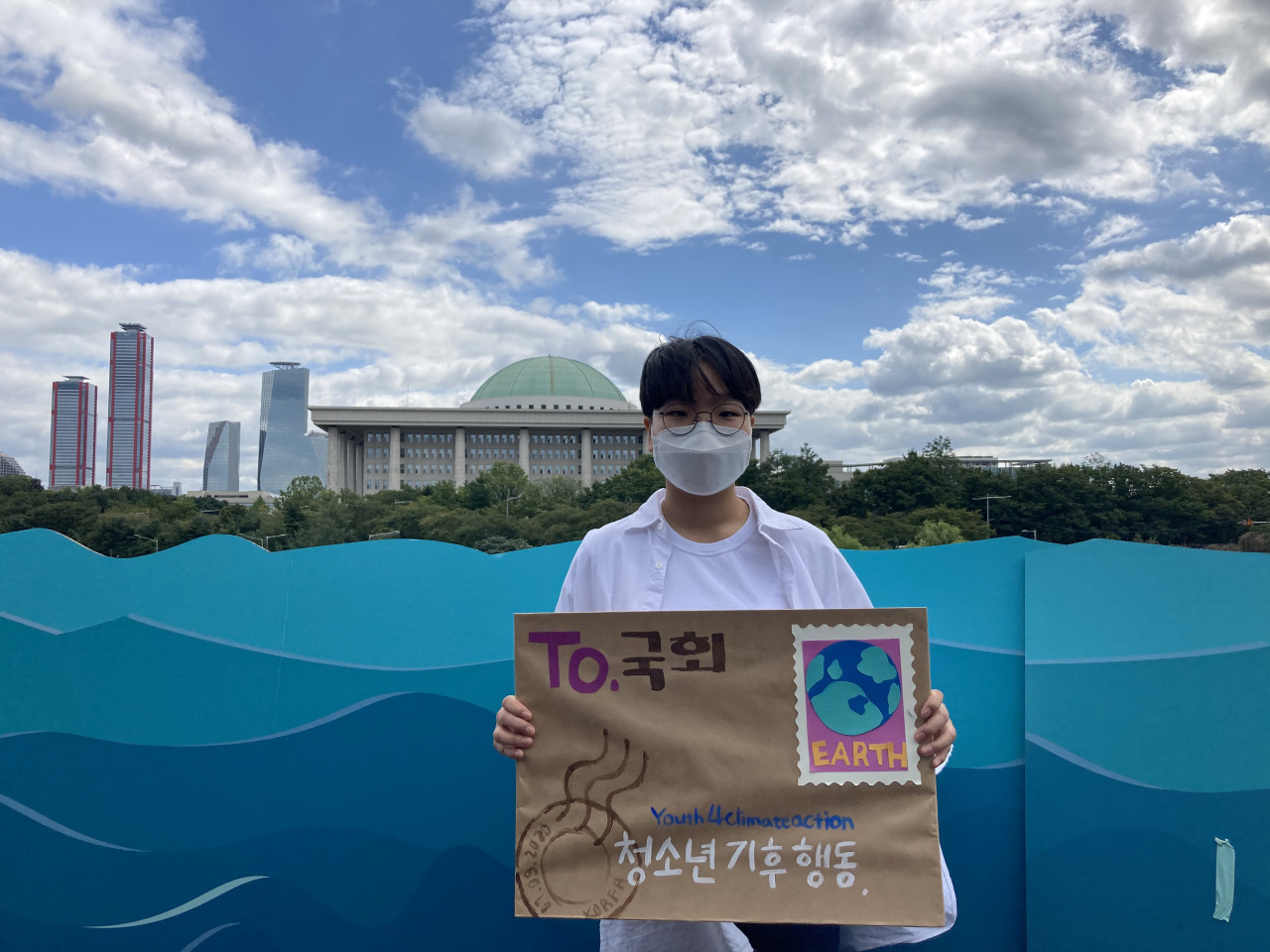 Teenage climate activist Yoon Hyeon-jeong poses for a photo in front of the National Assembly in Seoul while holding a placard urging lawmakers to take action on the climate crisis. (Yoon Hyeon-jeong)
The Korea Herald is publishing a series of interviews with the lineup of speakers who will discuss solutions to the climate crisis at the H.eco Forum, which is scheduled to be held virtually on June 10 under the theme “We Face the Climate Clock.” -- Ed.

Schooling on the climate crisis was far from the reality. In her social studies textbook for 17-year-olds, there were only a couple of pages on global warming, which Yoon said focused on “playing down” the problem of climate change.

“Teachers still say to us it is not our job to demand a shutdown of coal plants. They say what we can do best to help tackle the climate crisis is to use less plastic and recycle,” Yoon said in an interview with The Korea Herald last month.

Yoon will be one of the speakers at the first H.eco Forum, which is to be held virtually on June 10 to discuss solutions to the global climate emergency.

What enrages her is that the government and politicians are trying to shift the responsibility for actions to individuals.

Individual action on climate change can indeed make a significant impact, but we need bigger, systemic changes to reduce emissions, she said. Beyond changing personal habits, such as recycling and using less plastic, our individual action should involve raising our voices about the climate crisis and using our votes to put pressure on the government and lawmakers to act on it, she added.

Yoon, who dropped out of high school in Ulsan, also lamented that adults do not take young people’s voices seriously.

“Our survival depends on how much we reduce greenhouse gas emissions now, but coal plants are still being built and run. Decisions are made by adults, but it is a problem that affects us.” 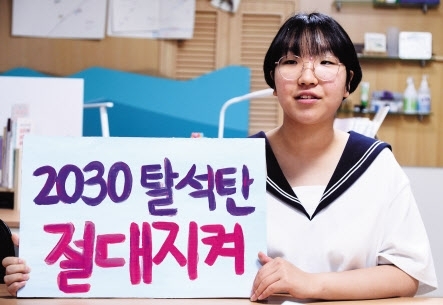 Teenage climate activist Yoon Hyeon-jeong holds up a placard reading “2030 coal-free, keep the promise!” (Lee Sang-sub/The Herald Business)
It was after she watched the 2005 film “Earthlings” -- on the suffering that humans cause animals -- that she was able to connect the dots between meat consumption, greenhouse gas emissions, global warming and climate change.

“I thought it was just a problem of dying polar bears and sinking islands. I didn’t know it was my problem,” she said. “But it became clearer that my life, dignity and rights would be violated by the climate crisis.”

After Yoon realized that there were about six years to stop global warming before its impact becomes irreversible, she joined a youth campaign against climate change -- including the school strike for climate, a global movement initiated by Swedish activist Greta Thunberg.

Yoon is one of some 35 activists for Youth 4 Climate Action Korea, part of the global youth movement Fridays for Future. The majority of its members are teenagers who attend school while conducting various campaigns.

Their activities have included filing a constitutional petition in March last year that accused the government, policymakers and lawmakers of infringing on their right to life by failing to act on climate change. The Constitutional Court is deliberating on the petition.

What Yoon demands now is drastic, swift action to limit global warming -- phasing out coal by 2030, cutting emissions by 70 percent by 2030 compared with 2017 levels and going carbon-free by 2050 -- rather than mere words.

“I hope they remind themselves of what’s really important. Is money more important than our survival and rights?” she asked.