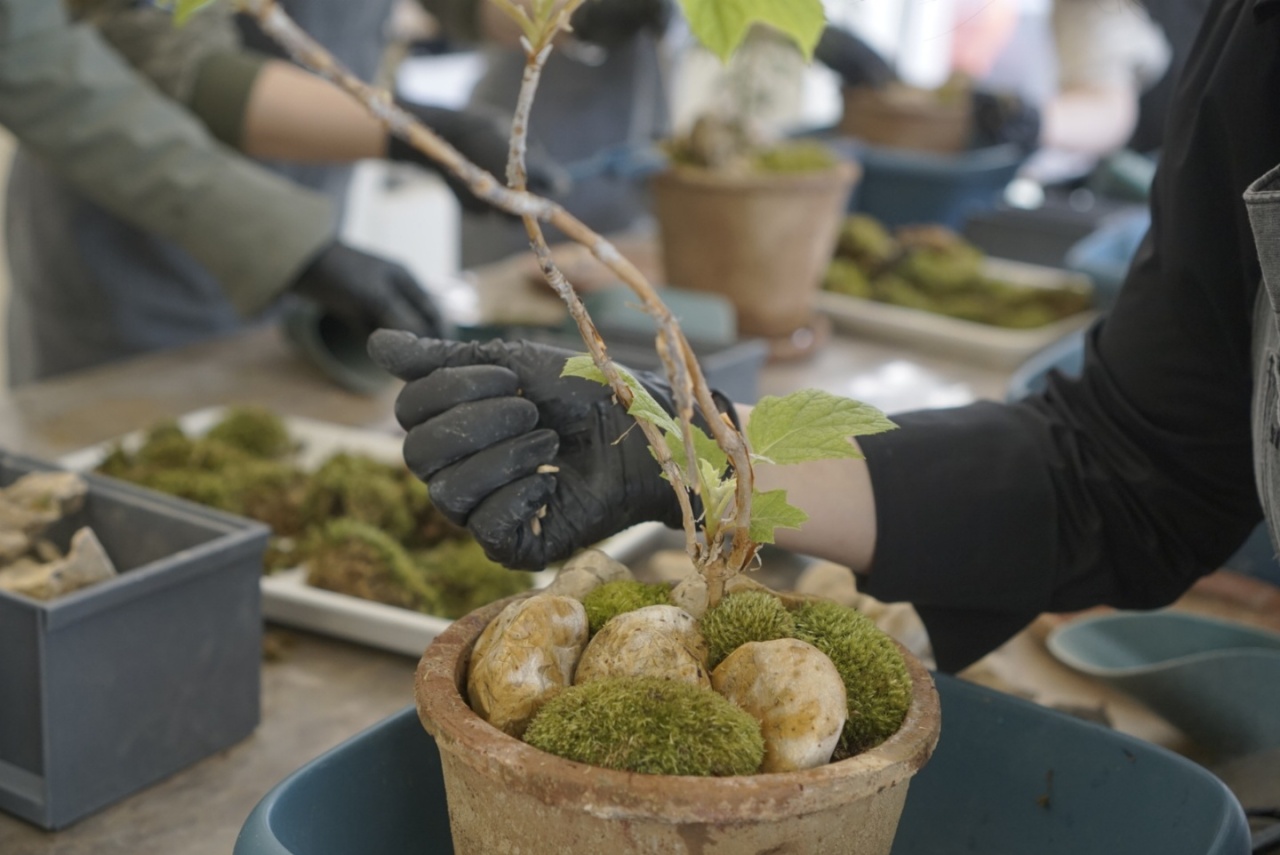 His passion of cultivating scallions and other plants at a corner of his home veranda is an illustration of a trend that has been sweeping across South Korea: home gardening.

Though raising one or two plants at home may be nothing new, the pandemic has spurred people to take the hobby to the next level. Koreans are now splurging on building their own mini gardens in their apartment balconies or decking out front yards of their houses.

“At-home gardening used to a hobby for the rich,” said Kim Jung-min, CEO of Studio Conte, a garden design firm.

“After COVID-19, however, the market saw a whole new level of demand, with more people seeking to integrate nature in their lifestyle as remote working and stay-at-home activities increased,” she added.

Those seeking to nurture their green thumbs have also jumped at the opportunity to join her gardening classes she offers at a private studio in Gyeonggi Province, Kim observed.

Like Kim said, home gardening had been a hobby for the minority only until recently as most Korean households reside in apartment complexes, which are not the most ideal places for plants to thrive.

The number of Korean households living in apartments surpassed 10.01 million as of 2018, accounting for 50.1 percent of all households here, according to data from Statistics Korea. 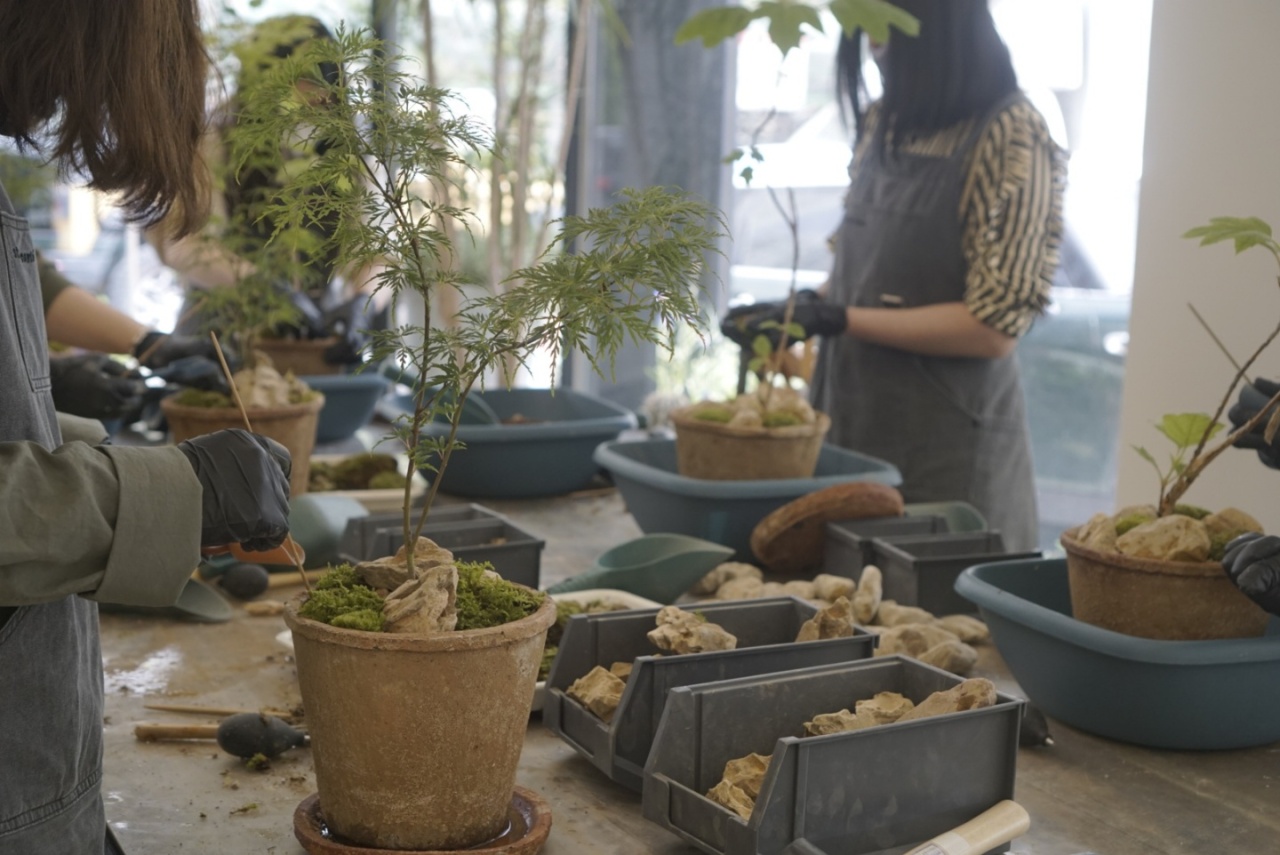 People attend a gardening class at Studio Conte in Gyeonggi Province in May. (Studio Conte)
The rise of e-commerce platforms such as Coupang amid the pandemic, had apparently contributed to the popularity of the home-gardening trend. While Coupang doesn’t have exact data on the sales of its home-gardening wares, one of its most popular soil products received over 1,700 reviews as of Thursday.

“Buying gardening products, especially large bulks of soil, were always troublesome,” said Shin Na-young, a 60-year-old woman residing in Itaewon, who has taken up gardening as a near-retirement hobby.

“I had to drive outside Seoul to get it from suppliers directly, but with the e-commerce site’s delivery services, I don’t have to go through all that trouble anymore.”

Sales of gardening products in major brick-and-mortar retailers saw gains as well, despite having been dealt a blow by social distancing rules.

According to Lotte Mart, its sales of gardening-related products gained 18.7 percent on-year last year, while the corresponding figure for E-Mart inched up 1.4 percent on-year.

“The home gardening trend just lines up with everything that became amplified with the pandemic,” said Lee Eun-hee, a consumer science professor at Inha University.

“It’s people seeking comfort with nature coupled with more frequent use of Instagram -- a perfect mix that garners attention,” she explained.

At the moment, one of the most popular plants to grow at home are edible ones, as shown in the “I Live Alone” episode featuring SHINee’s Key. Scallions are at the heart of the edible-plant demand because it’s a key ingredient needed in most Korean dishes including kimchi.

“Because of the soaring prices of agricultural products, people have been farming them in small batches at home, creating a new word such as ‘Patech,’” said Lee at Inha University.

As the name indicates, the popularity is mainly due to soaring scallion prices, which gained 130 percent on-year in May, according to data from Statistics Korea. 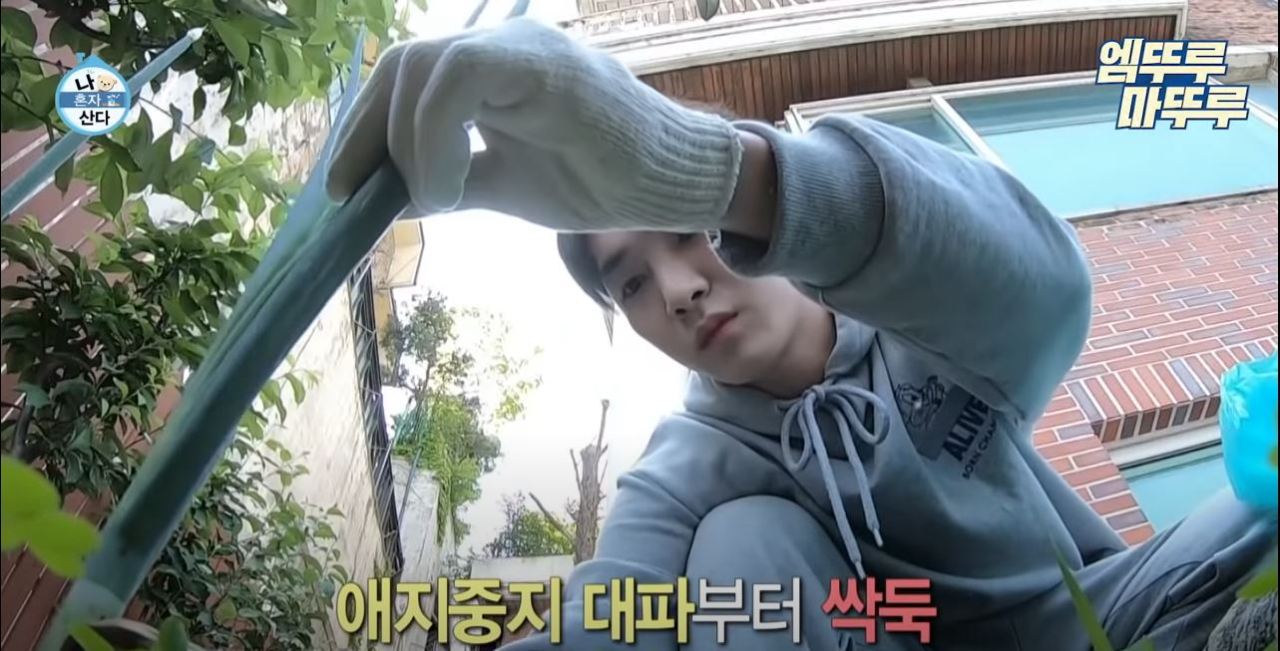 Key of boy band SHINee gathers scallions grown on his apartment balcony during an episode of MBC reality show “I Live Alone,” May 28. (YouTube screencap)
The average cost of scallions per kilogram sold in retailers across the country more than doubled on-year in May to 5,215 won ($4.69), data provided by the Korea Agro-Fisheries & Food Trade Corp. showed. It was relatively tamer than the price gains in March and April when it jumped 300 percent and 270 percent on-year.

A temporary supply chain disruption was the culprit behind the price surge, according to Finance Minister Hong Nam-ki.

The overall cost of agricultural, livestock and fisheries products surged 12.1 percent on-year in May, becoming a key catalyst in accelerating the nation’s consumer inflation to more than a nine-year high.

Prices of garlic, another important ingredient in making kimchi, jumped 53 percent on-year in May as well.

Meanwhile, businesses have been eyeing the growth of the local home-gardening market, and are hoping to harness technology to capitalize on the nation’s horticulture frenzy.

Kyowon Wells, a water purifier manufacturer here, has been one of the first to launch an indoor plant cultivator in 2018. Plant cultivators are appliances that utilize advanced technology to control light, temperature and water to create optimal conditions for plants to grow.

A total of 25,000 cultivators have been sold as of end-2020, the firm said. The cultivators are also available for rent.