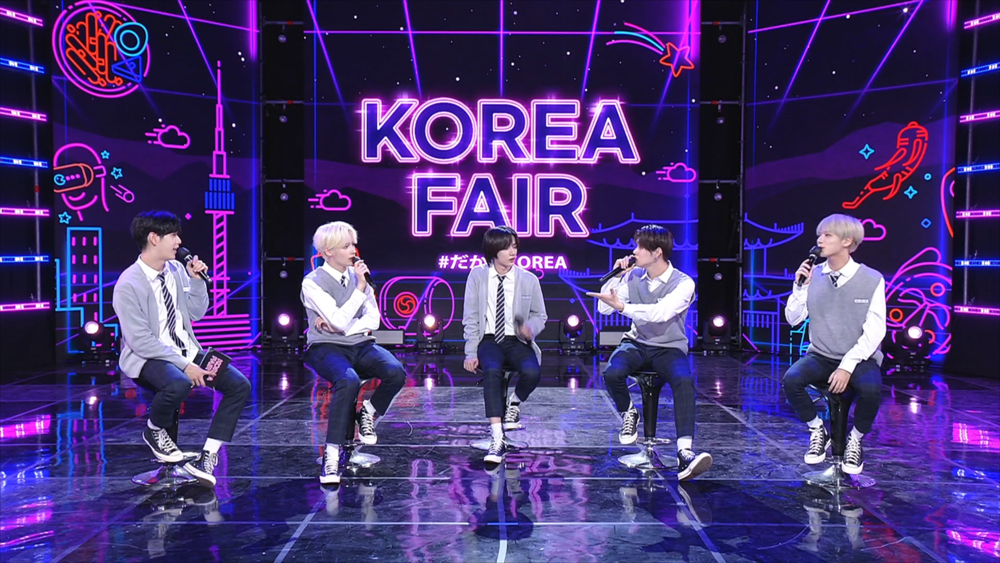 K-pop act Tomorrow X Together holds a talk at “Korea Fair 2021 #Dakara Korea” organized by the Korea Tourism Organization on May 28. (KTO)
With travel restrictions being gradually lifted in different countries and vaccination roll-out gaining momentum in Korea, the tourism sector hit hard by the more than yearlong pandemic is gearing up to attract foreign travelers.

The event marked the beginning of KTO’s Korea Fair 2021 #Dakara Korea. “Dakara” is a Japanese word, meaning “that is why.”

On the first day of the online event, Tomorrow X Together, a boy band from Big Hit Entertainment interacted with fans through a speed quiz centered around the theme of Korea’s tourism hubs -- Busan, Jeonju, Gangneung, Andong and Mokpo.

On the second day of the event, K-pop boy band Enhypen introduced well-known Korean tourist attractions. The members chose Gangneung as the place they would like to visit with fans when the pandemic is over, introducing some charming spots around the city. In addition, travel-related content such as K-pop dance classes and an online streaming visit to Seoul’s Mangwon-dong were presented.

The event attracted up to 45,000 concurrent users, and reached some 100,000 accumulated views so far. For the online event held to recruit 200 participants, more than 2,000 applied within two days.

The tourism organization‘s offices in Japan simultaneously hosted “Korea Fair In Japan,” online and offline events that were streamed live through their social media.

“#Dakara Korea” campaign, co-hosted by a Japanese online travel agency, plans to sell custom-made products such as Korean cultural experience and lecture series, as well as early-bird discounts on travel to Korea, including hotels.

“The Japanese MZ generation’s interest in Korea have been generated since childhood, naturally encountering Korean culture, and this has a significant ripple effect,” said Kim Yong-jae, head of KTO’s Northeast Asian team.

Meanwhile, the number of visitors coming from Japan recorded a 74.7 percent drop during the first half of last year, compared to 2019, according to Korea Culture and Tourism Institute data.