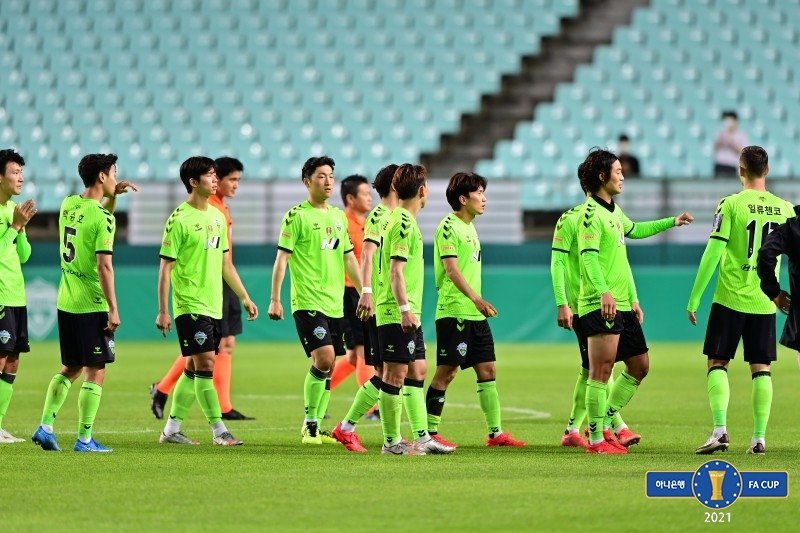 Jeonbuk Hyundai Motors players react to their 10-9 penalty shootout loss to Yangju FC in the round of 16 at the Korean FA Cup at Jeonju World Cup Stadium in Jeonju, 240 kilometers south of Seoul, last Wednesday, 2021, in this photo provided by the Korea Football Association. (Korea Football Association)
Could this spell the end of the greatest dynasty in South Korean football?

Jeonbuk Hyundai Motors, four-time defending K League 1 champions, have tumbled down from first to fourth in the tables over the past two weeks.

They were still at the top before facing rivals Ulsan Hyundai FC on May 19. They dropped that match 4-2 and slipped to second place.

And their winless skid reached seven matches Saturday, following a 1-1 draw with Incheon United. Only an injury time goal by Takahiro Kunimoto salvaged a draw for Jeonbuk, which have four draws and three losses in the current slide. This is their longest winless stretch since 2007.

Jeonbuk got to 30 points with the draw and stayed in third temporarily. And then Daegu FC zipped past them into third place with a 1-0 win over Gangwon FC on Sunday, which gave them 32 points.

Outside league play, Jeonbuk also suffered a humiliating shootout loss to a third-division club in the round of 16 at the Korean FA Cup last Wednesday.

The light at the end of Jeonbuk's tunnel may only be visible to the most optimistic.

They've lost left fullback Choi Chul-soon for a couple of months with a knee injury, as the 34-year-old veteran joins fellow left back Lee Ju-yong (broken toe) on the sidelines.

That Choi has remained an integral member of the club at 34 is a testament to his consistency, and it also speaks to Jeonbuk's pipeline that has been drying up.

Other core members of Jeonbuk, including Kim Bo-kyung, Han Kyo-won, Lee Yong and Hong Jeong-ho, are all in their 30s. They have looked the part of 30-somethings at times this year, and Jeonbuk haven't had any young guns step up to fill the void.

This is in contrast to the emergence of young talent for other contenders.

Ulsan, now atop the tables with 36 points following a 2-1 win over Jeju United on Saturday, boast some of the K League's best under-25 talent in Won Du-jae (23), Lee Dong-gyeong (23) and Lee Dong-jun (24). Won and Lee Dong-gyeong have been called up to the senior national team for upcoming World cup qualifiers, while Lee Dong-jun will compete for the Olympic team in a pair of pre-Tokyo tuneup matches against Ghana next month.

No. 2-ranked Suwon Samsung Bluewings, which beat FC Seoul 3-0 Saturday to extend their undefeated run to eight, have one of the league's most pleasant surprises in forward Jung Sang-bin. He earned his first senior international call-up last week at age 19.

To win four straight championships from 2017 to 2020, Jeonbuk relied heavily on veterans and it left little room for prospects to grow. They did make some moves along the way to inject fresh blood, but many of them didn't pan out or weren't given much of a runway to get settled into Jeonbuk's system.

Jeonbuk, the only K League club to win four straight titles, will likely be among the busiest clubs during the summer transfer window, when they'll try to right the ship before it sinks. (Yonhap)