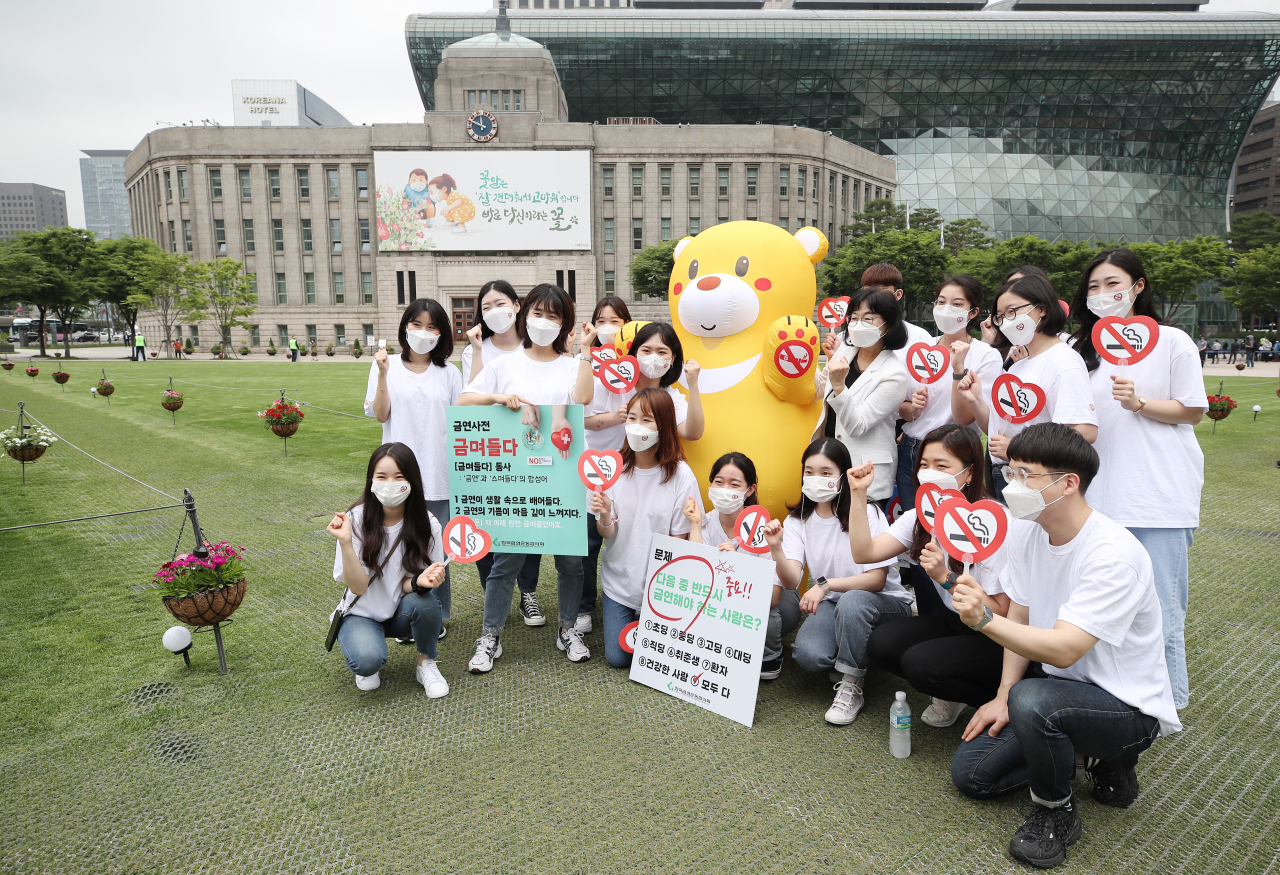 Members of the Korean Association on Smoking or Health stage a campaign Monday by the city hall square in Jung-gu, central Seoul, to encourage people to quit smoking, in celebration of the World Health Organization’s World No Smoking Day. (Yonhap)
The smoking rate in Seoul dropped to its lowest level ever in 2020 as more smokers quit amid the COVID-19 pandemic.

The Seoul Metropolitan Government said Monday that the smoking rate for adult residents of Seoul was 15.5 percent in 2020, down 1.2 percentage points from a year earlier. It is the lowest figure ever recorded since the city began collecting the data in 2008.

The smoking rate for adult men in Seoul fell below 30 percent for the first time, hitting 28.9 percent, down 2.0 percent from 2019. The rate for adolescents dropped from 5.7 percent in 2019 to 3.4 percent last year, the lowest figure ever recorded in the city.

The city government attributed the change to an increased focus on health as a result of the COVID-19 pandemic, citing its own surveys last year.

According to a survey of 1,500 Seoul residents in 2020, 27.7 percent of respondents who identified as smokers said they smoked less frequently than before. Another survey found that 49.1 percent of smokers in Seoul had attempted to quit last year, up 26.4 percentage points from 22.7 percent in 2019.

In light of World No Tobacco Day, which fell Monday, the city government said it would strongly recommend that Seoulites quit smoking for their own safety and that of their families.

The Korea Disease Control and Prevention Agency has categorized cigarette smokers as a high-risk group for COVID-19, and the World Health Organization has also listed smoking as an additional risk factor for those infected with the coronavirus.

Seoul announced Monday that it would strengthen its regulations on tobacco advertising based on the Partnership for Healthy Cities with Bloomberg Philanthropies. Seoul is one of 69 cities to sign on since the partnership was established in 2017.

The city government said it would inspect retailers to learn about the status of cigarette advertising in Seoul and would survey the people of Seoul on the need for additional regulations on tobacco consumption.

The survey results will help the city government establish new regulations on tobacco in preparation for the post-COVID-19 era, it added.