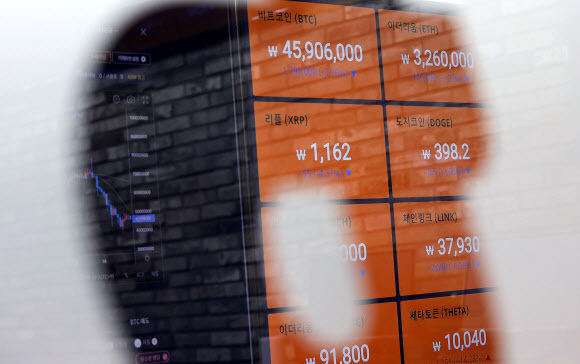 Cryptocurrency prices are displayed on a digital board at cryptocurrency exchange Bithumb on Friday. (Yonhap)

The Financial Supervisory Service has been designated to man the main control tower overseeing the country’s burgeoning virtual asset market, putting an end to months of discussions on who would take charge, while major cryptocurrencies fell over the weekend.

In an announcement on Friday, the government delegated the FSS, the country’s financial regulator, in charge of virtual assets while the Ministry of Science and ICT will take the helm in leading the country’s blockchain technology industry and its development. This decision comes after months of deliberation on who should take on the task of oversight the industry.

The FSS will oversee the previously introduced measures including the Act on Reporting and Using Specified Financial Transaction Information, which imposes restrictions on cryptocurrency exchanges.

The government reaffirmed its plan to charge and demand a 20 percent income tax on gains from cryptocurrency transactions from next year. Those who earned more than 25 million won ($22,400) or more during 2022 will be subject to the income tax.

The government also decided to prevent cryptocurrency operators from being able to engage in transactions or brokerage services themselves in an effort to enhance transparent operation of cryptocurrency exchanges.

Meanwhile, the largest digital cryptocurrency Bitcoin stood at about 41.5 million won as of 11:50 a.m. Sunday, 2.79 percent down from 24 hours ago, according to Upbit, the country’s largest cryptocurrency exchange. Ethereum lost almost 3 percent during the same period, retreating to 2.7 million won.

Due to the recent plunge, some institutional investors which purchased cryptocurrencies recently, including game-maker Nexon and China’s beauty app Meitu, are seeing a loss of their digital coin holdings. For instance, Nexon’s Japanese unit bought 1,717 Bitcoins for about 65 million won each in April but the current value is down 36 percent.

Bitcoin and Ethereum began a downward movement on the second weekend of May, which coincided with Tesla CEO Elon Musk’s appearance on a TV show where he spoke about Dogecoin and referred to it as a “hustle.” Dogecoin is a type of altcoin, or all cryptocurrencies other than Bitcoin, that had once emerged as the third-largest by market capitalization on the back of Musk’s support. Tesla’s decision to halt its plan to accept Bitcoin for its products also drew investors’ ire.

To make the situation worse, countries introduced measures to crack down on the cryptocurrency industry, including China and the US. Earlier this month, China banned Bitcoin mining and trading in the country while the US Department of Treasury said that it will require any cryptocurrency transfers worth $10,000 or more to be reported to the tax agency.