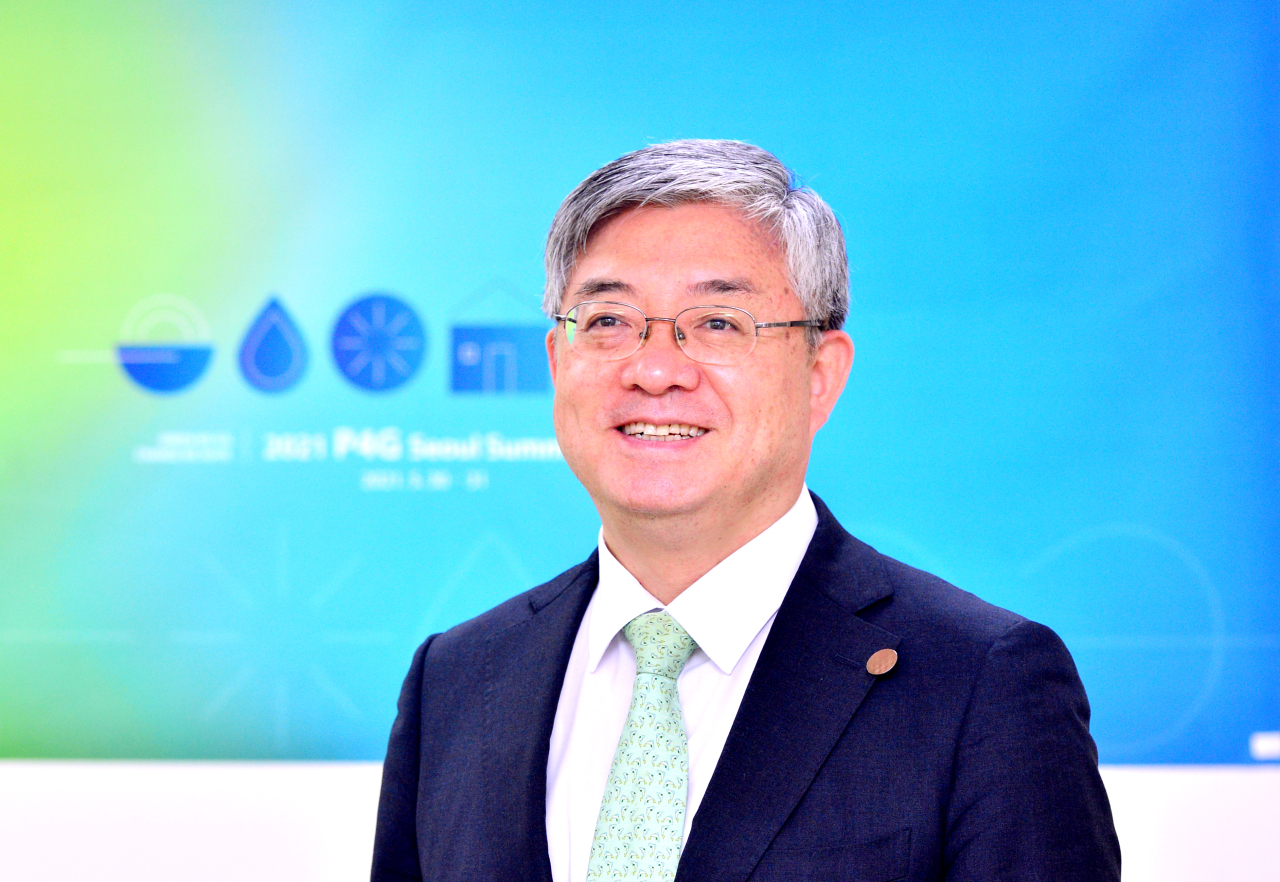 Yoo Yeon-chul, executive director of the 2021 P4G Seoul Summit Preparatory Office, poses for a photo at his office in central Seoul. (Park Hyun-koo/The Korea Herald)
After decades of refusing to face up to climate change and focusing on economic growth at the expense of the Earth, this year could be a turning point in the global fight against global warming.

The coronavirus pandemic was a huge wake-up call for humanity to rethink the way we live, creating an unprecedented opportunity to “build back better and greener.”

“This year, we are finally at a starting point of acting on climate change. After 30 years of discussion, gaps on how we perceive global warming narrowed among public, private sectors and civil society,” Yoo Yeon-chul, executive director of the 2021 P4G Seoul Summit Preparatory Office, said in an interview with The Korea Herald.

Now, there is a consensus that global warming is real and that the world needs to act before the situation becomes irreversible. Yet, the biggest challenge remains -- driving immediate, drastic and collective action globally.

Through the upcoming P4G summit, South Korea, as a middle power, aims to expand its role in tackling climate change and urging international cooperation by bridging gaps between developed and less developed countries, Yoo said.

The second P4G summit, originally planned for last year but postponed due to COVID-19, is scheduled to convene virtually from May 30-31 in Seoul. It is the first multilateral summit on the environment to be hosted by Korea.

“The key to is limiting global warming to 1.5 degrees Celsius is to involve and help communities and countries that are most vulnerable to climate change,” said the senior diplomat doubling as Korea’s ambassador for climate change. “Without supporting them, we cannot force them to commit to cutting carbon emissions.”

That’s why P4G -- Partnering for Green Growth and the Global Goals 2030 -- is a vital platform to achieve carbon neutrality and UN Sustainable Development Goals, he noted, as it focuses on facilitating public-private partnerships in developing countries to deliver inclusive, sustainable growth.

Launched in 2017, P4G aims to lay the groundwork for sustainable business models by bridging a gap between governments and investors. Under the partnership, governments invest in initial stages of green projects and businesses step in later to grow the projects if they have potential to be lucrative, for example. That way, P4G aims to deliver scalable, transformative impact across sectors and borders.

Under the theme of “Inclusive Green Recovery towards Carbon Neutrality,” this year’s P4G summit will center on green recovery from the COVID-19 pandemic.

“We will discuss how to involve most vulnerable communities and countries in the process of green recovery because building inclusive economy will set us on the course to carbon neutrality, ultimately,” he said.

The two-day summit consists of five thematic sessions on water, food and agriculture, energy, cities, and circular economy, and 10 special sessions on such issues as climate change response and inclusive green growth. The Seoul Declaration is to be adopted at the end of the event.

Yoo said that Korea’s hosting of the P4G summit shows the Korean government’s resolve and efforts to step up its climate action not only domestically but also on the global stage in the post-pandemic world.

“It is difficult to deny that Korea has been one of the largest emitters of carbon dioxide. But this year marks the first step for the country’s road toward carbon neutrality,” he said, referring to the country’s pledge to achieve net-zero emissions by 2050 and its announcement of the Green New Deal initiative last year.

The Korean government is now sending a “signal” to businesses and individuals that its climate policies, regulations and targets will stay consistent and unchanged, Yoo said, adding that achieving net-zero emissions is “not optional, but imperative.”

Amid criticism that its ambitious goals are short on detailed roadmap and plans, the government said it will lay out different scenarios to go carbon free by 2050 and increase its carbon-reduction targets within this year. It recently declared a moratorium on overseas coal financing.

With the P4G Seoul summit held on the heels of critical net-zero commitments from governments around the world, Yoo hopes that the summit can provide a venue for countries to advance their climate ambitions to achieve the goals of the Paris Agreement.

With the Paris accord coming into force this year, political momentum is growing around the globe for bolder climate pledges and actions.

The P4G is a stepping-stone to the annual UN climate talks -- the COP26 -- which takes place in the UK in November, where 195 countries will report their latest climate pledges under the Paris accord. The Paris Agreement calls for limiting the global temperature rise to 1.5 degrees Celsius, compared to pre-industrial levels, to avoid a climate catastrophe.

In April, US President Joe Biden brought together 40 world leaders, including President Moon Jae-in, in a virtual Leaders Summit on Climate to get more nations to set more ambitious emissions-cutting goals.