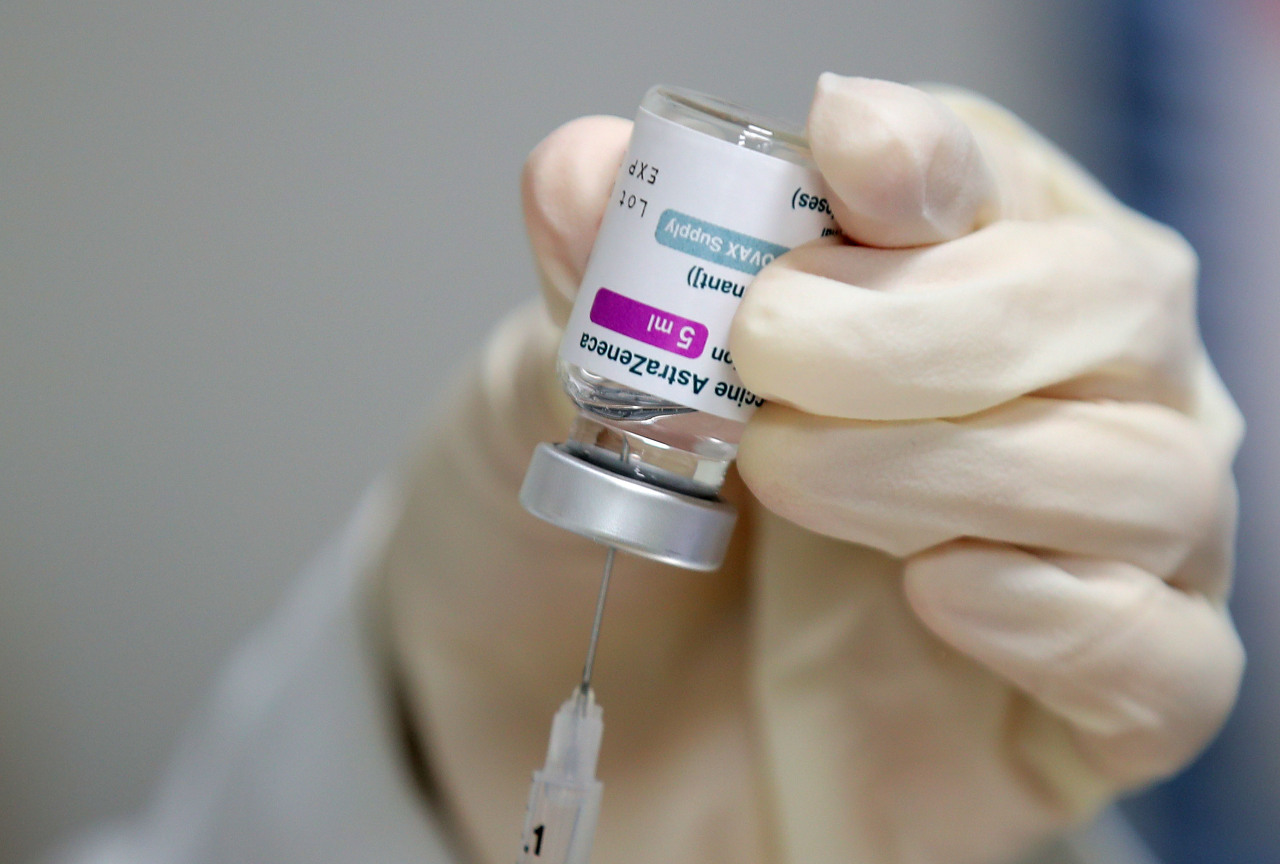 A health care worker at a Seoul public health center holds a vial of the AstraZeneca COVID-19 vaccine. (Yonhap)

South Koreans in their 60s to early 70s, for whom AstraZeneca’s COVID-19 vaccine becomes available Thursday, are reluctant to get vaccinated, the latest figures suggest.

So far only 55 percent of people aged between 60 and 74 have made an appointment, according to data from the Korea Disease Control and Prevention Agency.

There have been some notable age-related disparities in the vaccine appointment rates so far, according to Lee Jin-sook, the director of a public health center in Cheongju, the North Chungcheong Province city that is the home of the Korea Disease Control and Prevention Agency.

“Hopefully over the next week more people will decide to get vaccinated,” he went on.

Because people who decline to get vaccinated when their turns come up don’t get another chance until after November per the current protocols, the high proportion of older people going unvaccinated could place Korea further away from its goal of attaining herd immunity, experts warn.

People in the 60 to 74 age group have until June 3 to schedule a shot, after which point appointments are no longer accepted. Then they have to receive the shot on or before June 19.

“If older people remain unvaccinated, we would be forsaking the prime goal of the vaccination campaign, which is to reduce hospitalizations and deaths,” he said. People 60 and older make up 95 percent of all COVID-19 deaths in Korea.

Since people in this age group are offered the AstraZeneca vaccine, even those who do decide to get vaccinated will stay half-vaccinated months longer than Pfizer-vaccinated younger people, said Dr. Paik Soon-young, a virologist at Catholic University of Korea, leaving them vulnerable to the threat of variant infections.

Paik suggested shortening the interval between the two doses of the AstraZeneca vaccine as variants spread. As of last week, 36 percent of analyzed samples were positive for variants, which is up 13 percent from the week before, according to the KDCA.

“People who get a first dose of the AstraZeneca vaccine in June have to wait until September to get a second one. Incidentally, these are people 60 or older who are more in need of the full protection of two doses,” Paik said.

Younger people -- who are most likely to get the Pfizer vaccine, which has a shorter dosage interval of three weeks, in the summer -- will be completing their vaccinations sooner than the more vulnerable people in their 60s and 70s, he said.

“And when the Pfizer-vaccinated younger people are exempt from health regulations, while AstraZeneca-vaccinated older people are forced to continue to mask and socially distance, that could be a recipe for disaster,” he said. Health officials have said social distancing rules would probably be eased in July.

As of Monday at midnight, at least 7 percent of the Korean population had received one dose of either AstraZeneca’s or Pfizer’s vaccine.