[ The Korea Herald – Send E-mail ]
Philippine investment agency eyes South Korean EV parts, semiconductor firms
By Korea Herald
Published : May 19, 2021 - 18:16
Updated : May 20, 2021 - 09:39
The Philippine Board of Investments, the lead industry and investment promotion agency in the country, said it is eyeing South Korean electric vehicle parts and semiconductor firms to further grow their businesses and make it happen in the Philippines. 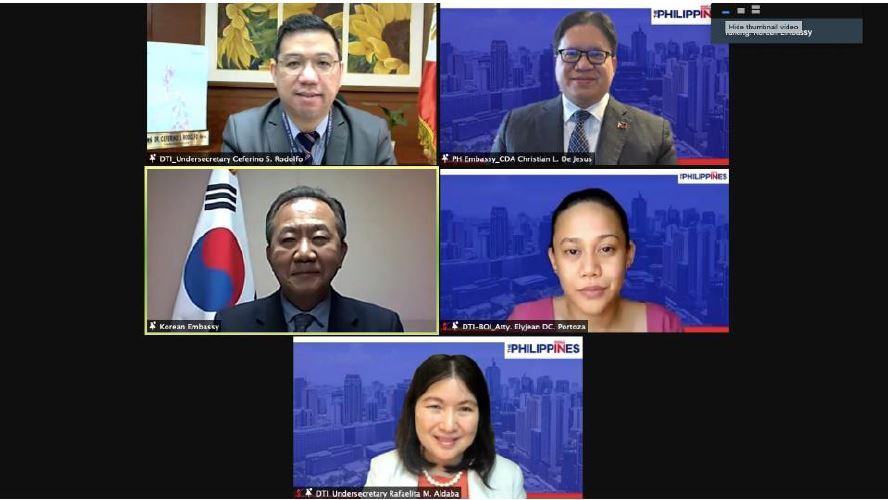 Participants discuss investment conditions in the Philippines seeking to lure South Korean manufacturing companies through an online briefing organized by the Philippine Board of Investments in April. (BOI)
Trade Undersecretary and BOI managing head Ceferino Rodolfo made this statement during an online briefing with South Korean companies in April on the recently-enacted Corporate Recovery and Tax Incentives for Enterprises Act and the Strategic Investment Priority Plan.

“With CREATE in place, we are encouraging South Korean firms, especially those engaged in strategic activities like EV parts and semiconductor manufacturing to invest or expand in the country and take full advantage of this landmark legislation. We are strongly optimistic of a resilient post-pandemic recovery as the fundamental structure and strength of our economy remain intact. We positively respond to the easing of quarantine restrictions,” Rodolfo said.

Charge d’ Affaires Christian De Jesus of the Philippine Embassy in South Korea echoed this call. “There are more opportunities for the Philippines to host the different manufacturing companies of Korea and help make these companies more competitive through international expansion. Some of these leading sectors in Korea are in vehicle and vehicle parts including EV and EV batteries, electronics and semiconductors, life sciences and medical products and supplies, chemical products, heavy industries, and food processing,” De Jesus said.

“Our Philippine economic diplomacy is grounded in the pursuit of sustainable economic development through globally oriented, open, and inclusive economic policies for stakeholders. With the incentives tied to CREATE law, we can encourage more Korean companies in these manufacturing sectors to seriously consider the Philippines as their investment destination,” De Jesus added.

Rodolfo cited the most recent indicators that the Philippine economy is back on track with the latest data on employment, the manufacturing purchasing managers’ index, and inflation. He also shared the Philippine central bank’s latest report on the 41.5 percent increase in foreign direct investments into the country in January of this year, compared with the same month of last year.

Rodolfo pointed out that South Korean companies were among the top producers of semiconductors, including Samsung Electronics and Daeduck.
“Should they decide to put up another facility or expand production operations, they may avail of the following incentives under CREATE with at least four years of income tax holiday or even up to seven years because of the level of technology and location. And equally important, after this ITH, both of these export-oriented companies can enjoy 10 years of — at their choice — either enhanced deductions or the special corporate income tax of 5 percent on gross income earned,” he cited them as examples.

He also clarified that Korean companies who will invest in food manufacturing and sell primarily to the domestic market can also now enjoy incentives as CREATE treats local and foreign companies the same without any distinction.

“I just used semiconductors and automotive/auto parts such as wiring harness as examples but the situations are also applicable for other manufacturing and non-manufacturing projects,” he said.

“I believe that the CREATE Act will play a key role to improve business environment and stimulate foreign investments to the Philippines including investments from Korean corporations through lowering corporate income tax rates,” he said.

He also remarked on the further development of South Korea’s bilateral relationship with the Philippines.

“Once RCEP comes into effect in the near future and the Korea-Philippine FTA is signed, our bilateral economic and trade partnership will further leap forward,” the South Korean ambassador continued.