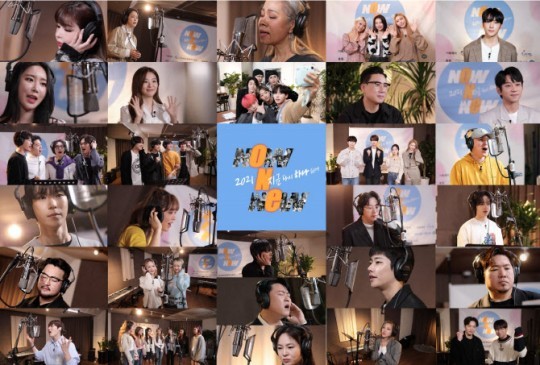 A compilation of screenshots shows singers recording the 2021 version of “Become One.” (Korea Entertainment Producer’s Association)
Well-known singers have come together with a message of hope in a remake of the 1999 song “Become One” (unofficial translation).

The original song was created to deliver that message amid the 1997 financial crisis in South Korea. Big-name singers of the time, from Shin Seung-hun and Kim Jong-seo to Um Jung-hwa and hit K-pop acts such as H.O.T, Sechs Kies and Fin.K.L, took part in the recording, earning the iconic song the moniker “the Korean version of ‘We are the World.’”

“The original song was created to support the people after the 1997 financial crisis,” said the Korea Entertainment Producer’s Association, which organized the remake.

“The remake version was recorded to (help people) overcome the crisis brought on by the unprecedented pandemic,” it said.

Producer Choi Joon-young, who composed the original work, took part in the remake too.

All proceeds from the song will be donated to those who are experiencing difficulties due to COVID-19, in the names of the Korea Entertainment Producer’s Association and participating singers.

Viewers can see the video and behind-the scenes footage on the SBS show “Hope TV” on May 28.