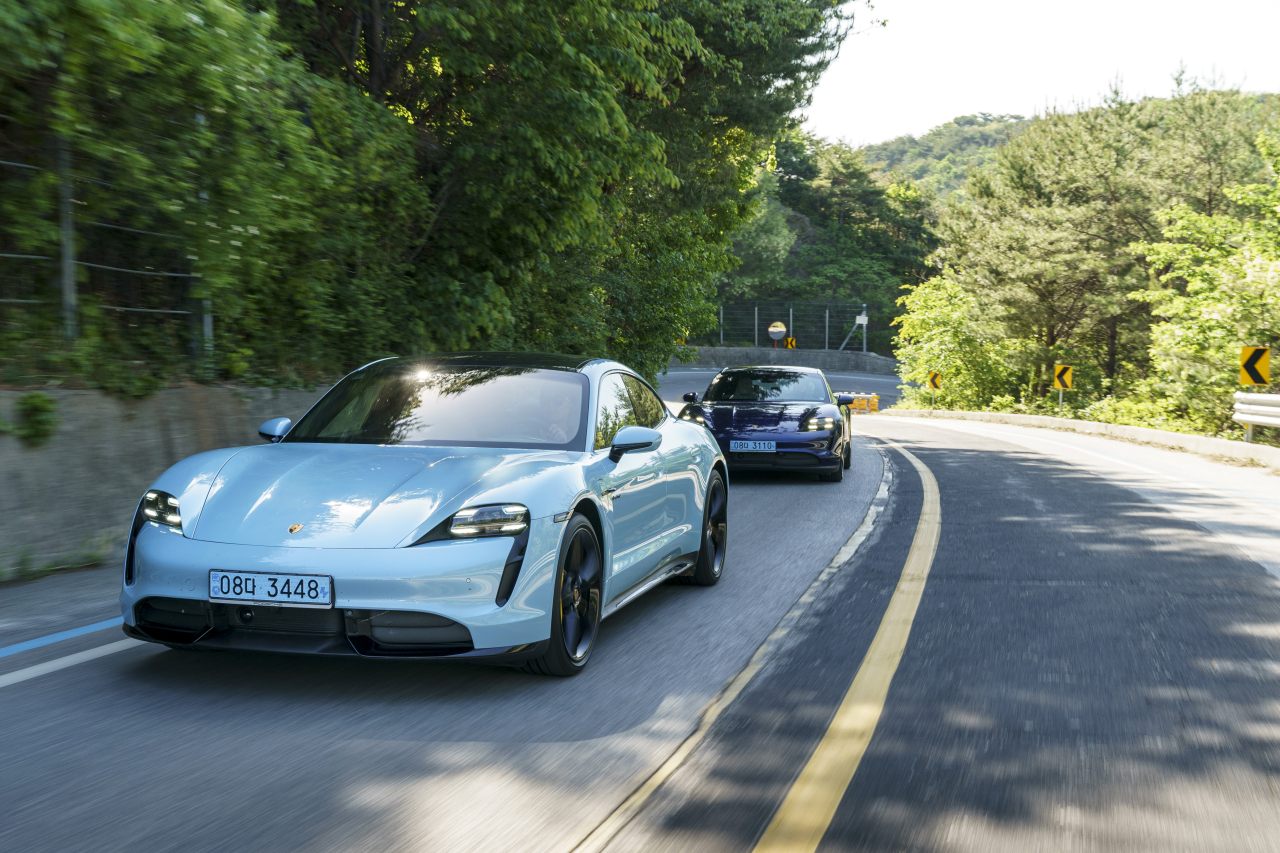 The Porsche Taycan 4S (Porsche Korea)
After Porsche unveiled its first electrified sports car, the Taycan, in 2019, the automaker faced questions from car enthusiasts. What makes a sports car a sports car? Could a battery-powered car really ever offer the same thrilling ride as a high-performance conventional sports car?

But after taking the Porsche Taycan 4S for a 350-kilometer trip in a mountainous region of Gangwon Province, this reporter was impressed. The car not only proved as capable as any sports car that runs on gasoline, but even appeared to be a threat to the competition. Internal combustion engine vehicles appear to be on borrowed time, if EVs can go further and match their driving range on a single charge.

Car enthusiasts in South Korea also appear aware of the Taycan’s strong performance. As of April, Porsche Korea said it had sold 496 Taycan 4S cars since the model’s launch in November. This is more than double the number of EVs in that price range sold by its rivals. For instance, Mercedes-Benz Korea sold 242 EQCs in the same period, while Audi Korea sold 70 similarly priced EVs.

In a seven-hour test drive organized by Porsche Korea, The Korea Herald took the Taycan 4S on the winding roads of the province’s mountain areas -- the highways and coastal roads along the East Sea.

In appearance, the Taycan 4S resembles the 911. Like the Panamera, it is a four-door model. The interior also carried the Porsche identity, with the signature tabletop clock in the center. The digital cockpit and the 10.9-inch infotainment display in the center were simple, and the optional passenger display formed an integrated glass band with the central display, keeping the interior space up to date. 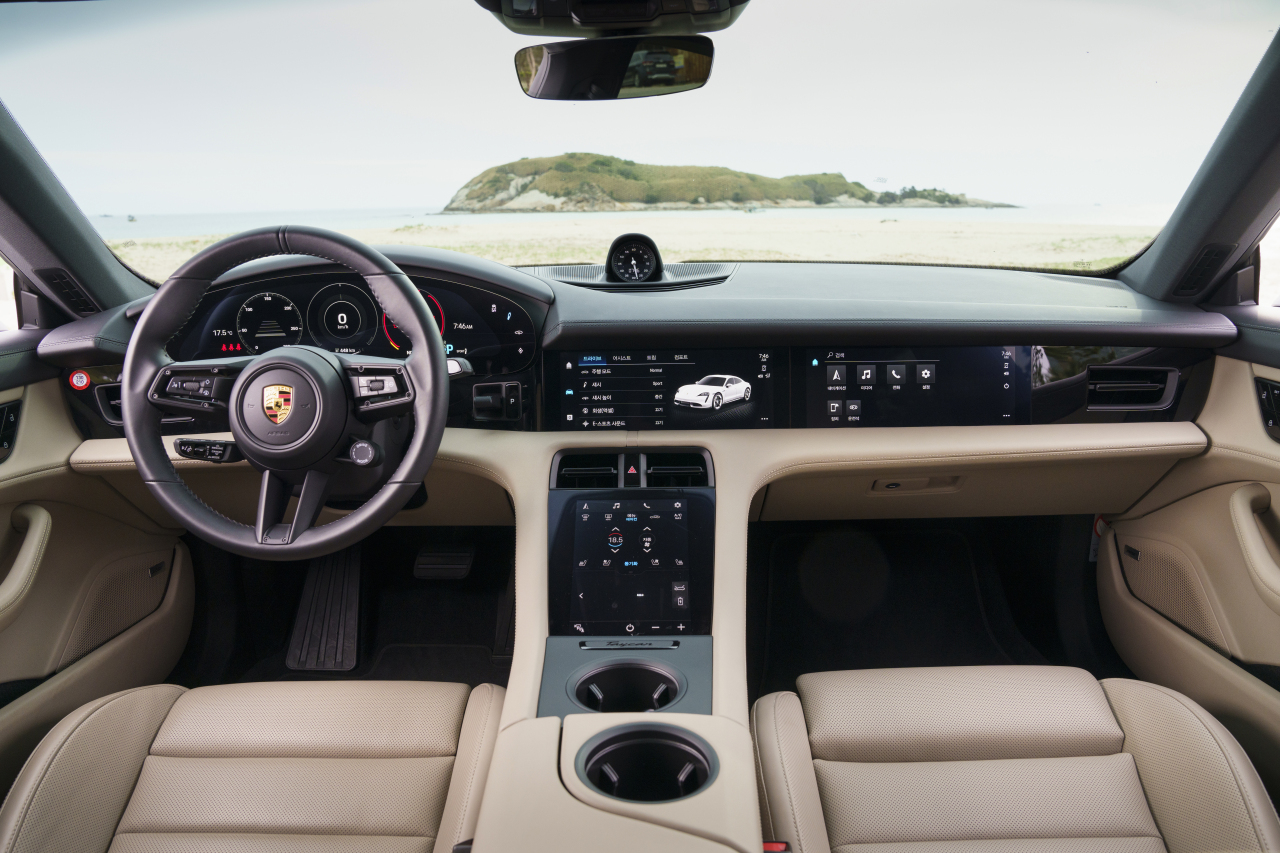 The Porsche Taycan 4S (Porsche Korea)
The expansive panoramic glass roof added to the ride, opening up the sky for passengers, especially in the rear seats. The glass roof has been coated to block out ultraviolet rays completely, the automaker explained.

As an EV, the car started and moved stealthily. When it picked up speed, the sound was what one might expect from a spaceship. Putting on Sports Plus mode, an add-on that turns on “Electric Sport Sound,” it grew louder and produced the familiar howling of an accelerating engine.

Going up the winding roads with sharp turns at some 80 to 90 kilometers per hour was like driving on a curvy racetrack. There, the Taycan 4S was superb in not only the handling, but in the way it firmly held onto the ground to offer a pretty stable ride.

The Taycan 4S was also capable as a racer. On the highway, the car responded quickly and smoothly without any loading when it accelerated to 200 kilometers per hour.

The Taycan 4S, the lowest trim of the EV model, comes in two battery sizes. A single-deck Performance battery with a gross capacity of 79.2 kilowatt hours is standard, and it can exert up to 530 horsepower (530 PS, 390 kW). The two-deck Performance Plus battery with a total capacity of 93.4 kWh is also available as an option and can facilitate up to 571 horsepower (571PS, 420kW). Both variants can go from zero to 100 km in four seconds. 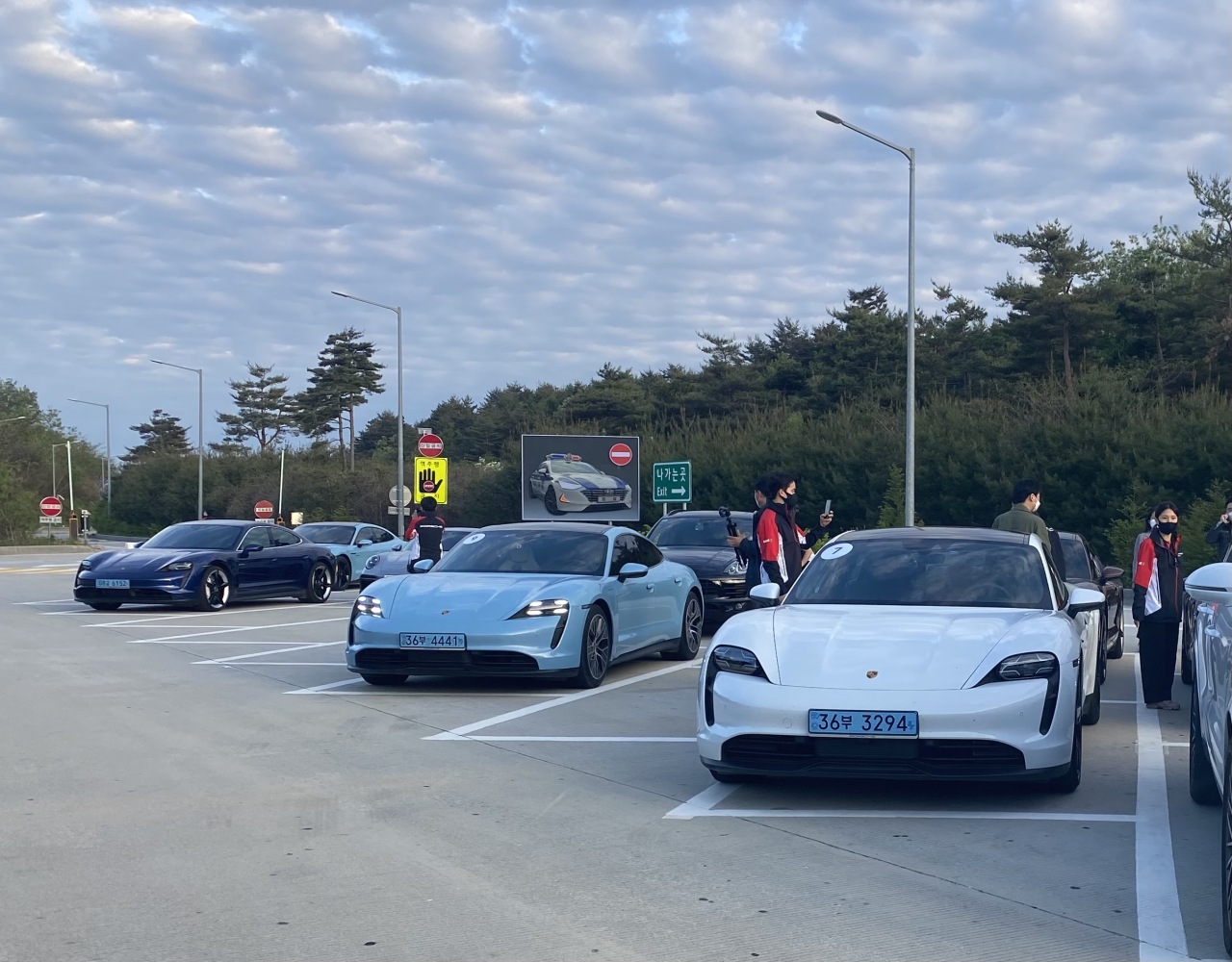 The Porsche Taycan 4S (Jo He-rim/The Korea Herald)
Performance-wise, the Taycan 4S was decent, but did have limitations as an electrified sports car.

Driving at speeds in between 140 kph and 170 kph for about 15 minutes, the Taycan 4S Performance Plus variant’s battery drained quickly, dropping by about 10 percent.

Of course, driving that fast would not be a daily experience, but the battery drainage might be distressing for speed maniacs.

Porsche did make serious efforts to compensate for the energy loss, equipping the car with a strong regenerative braking system. According to the automaker, up to 265 kilowatts can be generated from the battery pack with its two motors, one in the front and one in the rear.

While it is not a one-pedal-driving vehicle, the liftoff regenerative braking was also there so that, when the car was moving downhill on inertia, it would charge on its own.

Going down the hilly road without accelerating, the battery percentage did go up. 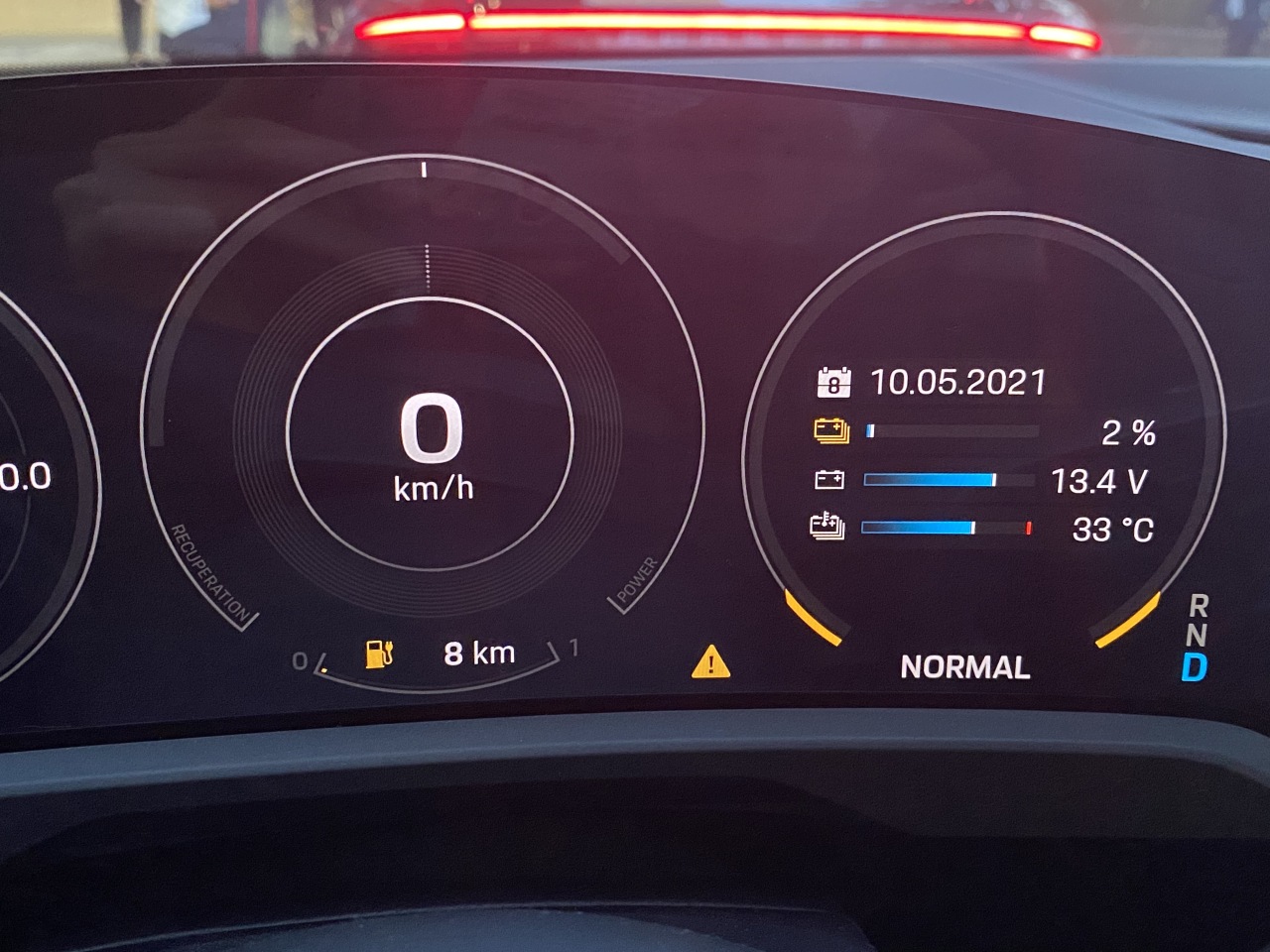 The Porsche Taycan 4S display shows 2 percent battery remaining and mileage of 8 kilometers, after being driven about 350 kilometers on a single charge Monday. (Jo He-rim/The Korea Herald)
Upon departure the EV was charged to 95 percent, and on that single charge it managed to complete the course of 350 kilometers at 2 percent, converting to about 8 kilometers in mileage. The air conditioner, music speaker and optional passenger display were all on for over seven hours.

The car fared well, and of course owners would normally charge it before the mileage ever got that low. But for long-distance trips, owners would have to make plans in advance and make sure they knew where to stop and charge the car.