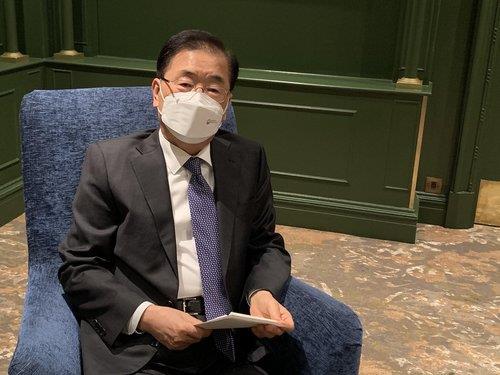 Last month, Tokyo approved a plan to dump more than 1 million tons of radioactive water from the wrecked nuclear power plant into the Pacific Ocean, sparking strong criticism from its local fishing industry and neighboring countries.

During the talks, Chung expressed concerns about the plan, and stressed the importance of the verification by international organizations, such as the International Atomic Energy Agency, according to the ministry.

Mahuta also mentioned worries about Japan's plan among island nations in the Pacific, vowing to continue consultations with the IAEA, it added.

Minister Chung also asked for Mahuta's attention to the swift resumption of the bilateral working holiday program which has been suspended due to the COVID-19 pandemic.

"The ministers agreed to deepen friendly, cooperative relations in various fields, such as human exchanges and economic cooperation in the post-coronavirus era, as they mark the 60th anniversary of the diplomatic relations next year," the ministry said in a release. (Yonhap)