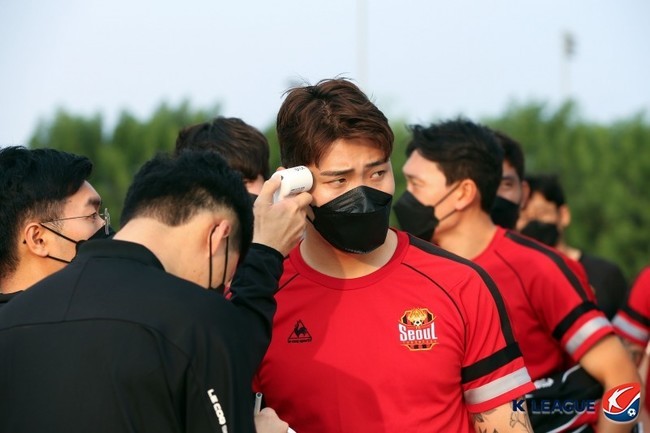 The 26-year-old was given a positive coronavirus test result Sunday afternoon after an acquaintance he met six days prior tested positive for the virus, the club said.

Hwang learned of the infection of his acquaintance Saturday afternoon and immediately reported it to his club, which relayed the news to the Korea Professional Football League (K League).

All other FC Seoul players and coaches tested negative for the coronavirus Monday after taking tests the previous day, the club said.

Regardless of the test results, they will be asked to self-isolate for the time being, the club said, noting Hwang will receive medical treatment in accordance with authorities' quarantine guidelines.

Hwang's infection is expected to influence the schedule of the K League 1, as he played in the home game against Seongnam FC last Friday as a substitute player for 20 minutes in the second half.

All Seongnam FC players, referees of the Friday game and others possibly exposed to Hwang are scheduled to take COVID-19 tests.

According to the football league's manual, if a coronavirus case occurs among players, coaches or other participants in games, the concerned team's games are postponed for at least two weeks in principle.

But the K League has also said teams in the K League 1 can still play matches if they have at least 17 healthy players, including one goalkeeper.

The K League said it will soon decide whether to reschedule matches after viewing the test results of all players and coaches involved and the outcome of relevant epidemiologic studies.

Last October, a K League 2 player tested positive for the coronavirus, resulting in postponements of some regular games. On April 17, a Daegu FC player was also diagnosed with COVID-19 but didn't affect his team's game schedule because he was undergoing rehabilitation treatment at that time. (Yonhap)