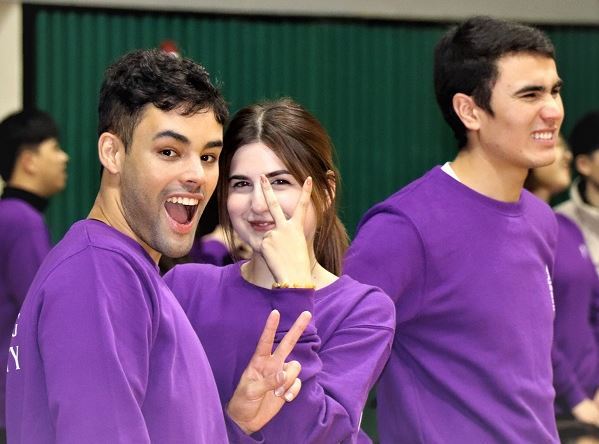 According to the Korean Immigration Service, those from Vietnam and China took up the dominant percentage, 69.8 percent, of 158,923 foreign students staying in the nation as of March. Among the group, 59,876 were Vietnamese and 51,094 Chinese.

Vietnamese nationals ranked No. 1 among those studying only Korean language at colleges or other certified educational institutions, while those from China topped the list in the number of people studying regular semester courses at colleges, international schools or other establishments.

In contrast, the portion of students from Japan, the US and other Western countries was quite small, though Koreans make up meaningful portions in Japanese, North American, Oceanian and some European schools.

The number of Japanese and US nationals studying in Korea stayed at 2,790 and 1,237, respectively, with a share of only 1.7 percent and 0.7 percent of the total. 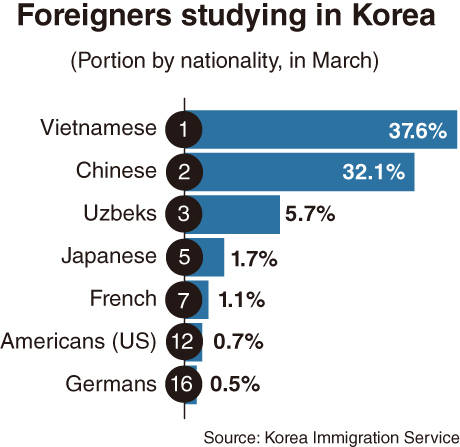 (Graphic by Kim Sun-young/The Korea Herald)
Students from France, Russia and Germany stood at 1.1 percent, 0.7 percent and 0.5 percent. Further, those from countries such as Canada, the UK and Australia were not included in the top 18 list due to their meager representation.

Among others in the top 18 were those from Pakistan, India, Bangladesh, Myanmar, Taiwan, Kazakhstan and Malaysia. Students from other countries outside the top list made up 6.8 percent collectively.

Of the total 158,923 foreign nationals, 47,681 people were studying Korean language, 111,231 were enrolled in regular educational courses, and 11 were studying other foreign languages.

There are international schools in different regions across the nation, such as on Jeju Island’s Daejeong-eup and in Incheon’s Songdo-dong, while colleges provide Korean language courses and strive to attract foreign nationals to stay on for regular semesters.

“The Education Ministry needs to make profound research on the attraction of foreigners with a variety of nationality in preparation for the post-pandemic era, and widen the territory of college lectures in English,” said an education researcher in Seoul.

KIS data showed that the number of foreign students staying in Korea fell by 11 percent on-year from 178,734 in March 2020 in the wake of the COVID-19 pandemic.

Meanwhile, Chinese nationals still ranked No. 1 in the number of foreigners, including students and workers, staying here. Among the 1.99 million foreigners in Korea, 868,765 were Chinese, including ethnic Koreans from China, March data showed.