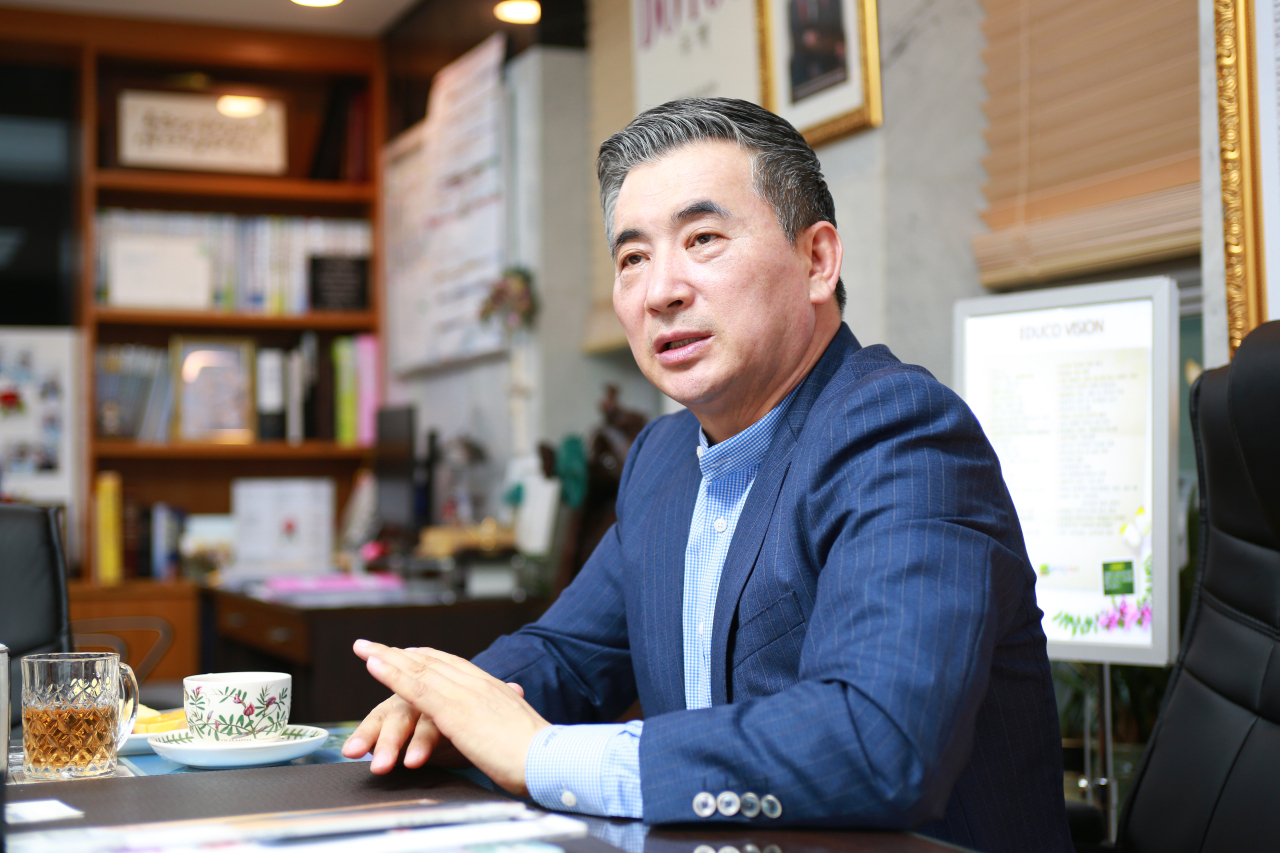 The education business is often equated with “teaching” -- that is, delivering facts and figures to students to advance their academic output.

But according to the founder of an education-based business here, the concept should be understood in a more comprehensive way to encompass “coaching” -- addressing the detailed needs and emotions of students and trainees.

“One of the key goals of my business is to convey to young people and our employees that education makes a difference, not only in academic achievements, but in life,” Kim Young-chul, CEO and chairman of Vine Group, told The Korea Herald in an interview.

“Every one of us has potential for infinite growth, and what it takes is the right attention and care in order to help it fully bloom.”

The group dates back to the early 1990s, when Kim launched Educo, an education publishing business that later expanded into online marketing and other investments.

“Being 35 and short of cash, I rented a small, timeworn office in Sindang-dong (eastern Seoul), which would leak water on rainy days,” Kim recalled.

His business model back then was based on reselling books from various publishers, mostly focusing on educational books.

“I learned in my younger days that nothing in life really turns out as planned,” Kim said, looking back on his teenage years in Gangwon Province’s Yanggu, when he dreamed of becoming a professional judo player.

But due to an unexpected injury, the young Kim was forced to give up his martial arts career at age 20.

Having found a job at a small publisher in Seoul, he learned the publishing and education business from scratch, gaining experience in business administration, marketing and sales. Later, all this helped him build today’s Vine Group.

“Despite the physical and financial challenges, our business managed to grow, thanks to the help of our employees and many acquaintances,” he said.

In 1995 Kim transformed his business into FairyLandEduco, a company dedicated to educational coaching, and soon gained an edge in the fast-growing market. It was in 2017 that Kim kicked off Vine, with a vision for a sustainable business that might last for a century and beyond.

“We started off as a coaching platform for toddlers and preschoolers, later expanding the range onto middle and high school students,” Kim said.

The unique feature of FairyLandEduco, according to the founder, was that it strictly separated its marketing and coaching sectors, ensuring that its coaches would always have a professional attitude.

“As the education market thrived, numerous other companies made their bid but few succeeded,” Kim said.

The FairyLand Educo brand currently has three major business categories -- SangSang Coaching, Power English and WaWa Learning Coaching Center. Of them, SangSang Coaching is a unique business that provides not only teaching to its students but also coaching services, which involve life and career counseling.

“Business is fundamentally about making money, but being involved in education, I gradually realized that money was not the only gain down the road,” Kim said.

“I figured that self-development is all the more crucial when it comes to young, growing children, and this is how I came to add the coaching factor to our teaching services.”

The coaching program also reflects the belief of the group and its founder that children should be guided in building not only their academic capacities but also their character as decent, upstanding members of society.

“These young people should be taught to connect with others and to foster their dreams and visions, so that they may grow into future leaders who may contribute to their family, society and country.”

The name Vine Group takes its inspiration from vines -- celebrated for surviving and growing under harsh conditions, according to Kim.

“Because we are a business group dedicated to the education and growth of young children, it was important that we sustain self-growth and self-trust among our members first, in order to create a virtuous cycle heading for long-term growth,” he said.

“It is due to the confidence in one another that our members may provide sincere service to their clients.”

It is also on the basis of that belief that Kim has offered an in-house training program for employees ever since the business started.

“There can be no proper business without proper education,” he said, underlining the necessity of investing in the nurturing of global leaders at all times.

Addressing those outside the company, Kim takes part in an extensive range of social contribution programs, building further on the coaching culture and maintaining partnerships with local communities, schools and nongovernmental organizations.

An example is the “We Can Do” program, which seeks to help teenagers achieve self-directed growth. Based on the Maximum Achievement Seminar by self-development trainer Brian Tracy, the program adds Vine-exclusive leadership courses and learning experiences to provide inspiration to young people.

Kim currently serves as vice president of the Korea Scout Association and as vice chairman of the central council of Gangwon Province residents, displaying his dedication to youth education and regional development.

Ahead of the 2018 PyeongChang Winter Olympics, held in his home province of Gangwon, Kim participated in the symbolic torch relay with other opinion leaders.