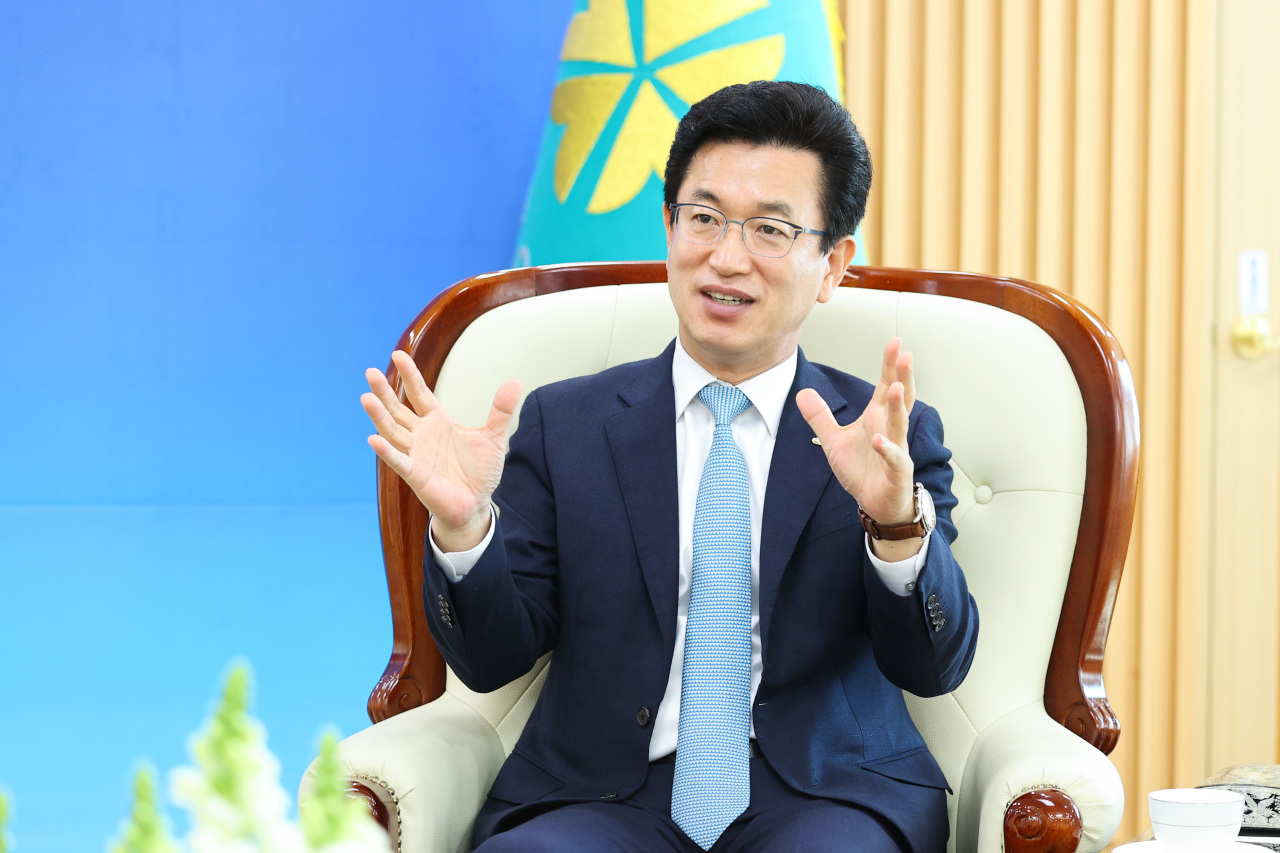 Under the grave circumstances brought on by the COVID-19 pandemic last year, the city succeeded in being designated an Innovation City. As a result, the city’s public institutions are now required to hire local talent.

With its own local currency, called Ontongdaejeon, Daejeon supported the COVID-19 response by vitalizing the local economy.

And with its Startup Park, its Social Venture Development Platform and its Solar Energy Corporate Joint Research Center, the city is well on its way to becoming South Korea’s Silicon Valley.

In the interview, Her promised to put his “best efforts into helping Daejeon, the high-tech future city, to take a leap forward as a central city leading Korea’s innovation growth.”

Q: Tell us if there were any changes after hosting the Global Startup Festival with The Korea Herald in 2019, and about the policies that Daejeon is pursuing to become a Startup City.

A: Held at the Daejeon Convention Center in May 2019 with approximately 3,000 participants from at home and abroad, Global Startup Festival 2019 let the world know about Korea’s innovative, dynamic startup ecosystem through investment-pitching auditions, business matching and exhibition services, and startup consultation sessions.

The highest priority for Daejeon’s seventh elected administration is the “realization of a technology startup power nation -- developing 2,000 startups.” Accordingly, we are building startup infrastructure such as regional startup towns, the Startup Park, the Re-challenge innovation campus, venture startup funds and a social venture street.

Furthermore, blessed with the most abundant research resources in the nation and with outstanding, creative human resources, the city is advancing its public research achievements through technology commercialization. We are establishing a local specialized startup ecosystem and encouraging project startups by matching investors, developers and managers with one another.

Between now and 2025, the city’s New Deal fund, worth 1 trillion won ($893.63 billion), will be invested to support the development and growth of startup businesses focused on new industries. Also, the city’s administration is looking to foster a business environment based on cooperation among industries, universities and private institutions such as the Daedeok Innopolis, KAIST and the Daejeon Tech Incubator Program for Startups Town.

Q: Daejeon is set to gain a higher profile as a global city with the upcoming United Cities and Local Governments event next year. What results do you expect from the event?

A: UCLG, an event in which the mayors of many different cities participate, together with various international bodies like the UN and NGOs from all around the world, is to be held in Daejeon in 2022.

It is the biggest international conference for approximately 1,000 local governments from 140 countries. With that said, it is the largest-scale event to be hosted in Daejeon since the Daejeon Expo in 1993.

We expect that the upcoming assembly will generate significant local economic ripple effects -- creating about 253 jobs and stimulating 384 billion won worth of production.

Also, with the establishment of infrastructure like the second exhibition hall of the Daejeon Convention Center and the Science Complex, and considering our experience in hosting international events, we -- the city of roads and transportation stretching in all directions -- are planning on actively bringing in more international conferences in the near future.

Q: Daejeon is facing a golden opportunity to emerge as an international city. What plans do you have for this year to achieve these goals?

A: Daejeon is an international science city in the field of research and development, with 98 public and private research institutes. However, our industries are lacking in certain aspects.

The International Science and Business Belt is expected to prime the pump for a dynamic business environment as it adds industry to previously existing research and development.

To achieve this, we will strive to attract foreign companies to the Foreign Investment Zone while continuing to expand overseas investment opportunities for the companies within our jurisdiction.

We are rapidly moving forward with construction for the Daejeon International Convention Center so that we can hold many international events.

Also, we will come up with new exhibitions unique to Daejeon, such as the Daejeon International Wine Festival, to make Daejeon a city for international meetings, incentives, conferences and exhibitions.

A: In November, two cities and both provinces in the Chungcheong region agreed to build a metropolitan living economy and promised mutual cooperation in all social, economic and cultural areas.

The Chungcheong region is attempting to form a large metropolitan area corresponding to the capital area and hopes to increase its regional competitiveness through the cooperative sharing of functions.

As the first step toward a megacity, in December the two cities and two provinces made a joint proposal to build a metropolitan railway network in the Chungcheong region. On March 19, three research institutes -- Daejeon Sejong, Chungbuk and Chungnam -- jointly participated in the launch of a research service to establish a megacity strategy.

Since the Chungcheong megacity is a long-term project for the future of the region, it requires continual research and discovery tasks by both cities and both provinces.

Q: Daejeon is planning to combine its Innovative City and urban regeneration projects to form a new balanced development model centering on the original city center and its subway system. What effects do you foresee at the local level?

A: Daejeon’s purpose in creating an Innovative City is to gain a foothold in Korea’s innovative growth, which is leading the “fourth industrial revolution,” and to provide a new model for balanced development through the vitalization of the downtown core.

To overcome the limitations of previous Innovation Cities focused on new town development and construct an Innovation City that stresses the regeneration of the downtown core, the city has selected the Daejeon Station area and Yeonchuk District as candidate locations for Daejeon Innovation City.

The Daejeon Station area will be established as a new growth center for Daejeon. We will promote the urban regeneration of the downtown core with its subway stations, enterprises, universities and research institutes, and we will build an innovation cluster centering on former public institutions.

Over time, we will significantly improve the imbalance between east and west, which has been Daejeon’s long-cherished desire, through the Innovation City-based regeneration of the downtown core.

A: A special urban convergence zone is an innovative space created in one of the five metropolitan cities (Busan, Daegu, Daejeon, Gwangju or Ulsan) to allow local companies and talented people to gather together -- one with outstanding, complex infrastructure for industry, housing and culture.

Daejeon is highly regarded for its technology startup innovation ecosystem, which is integrated with the largest research institutes in the nation and core public institutions based on Daedeok Innopolis.

In particular, the Daejeon special urban convergence zone business district is composed of two areas contiguous to one another, the area around Daejeon KTX Station and the new site of the South Chungcheong Provincial Office.

Since the area around KTX Daejeon Station (approximately 1.03 million square meters) includes the planned site of the Innovative City, the effects of linkages between the Korea Railroad Corporation and the Korea Rail Network Authority, which are currently located in the business district, are expected.

As the designation of the special zone has finally been completed, Daejeon City is going to establish a master plan for the special urban convergence zone with the 300 million won it received from the central government.

As for the Seonhwa area, the administration is planning on transforming it into a Startup Space Zone, using public land and empty houses. The Daejeon Station area will be transformed into a local specialized industry-oriented Innovation Diffusion Zone and will be the hub of the knowledge industry and the railway industry cluster.

Q: In October, Daejeon and South Chungcheong Province were designated as an Innovation City, something that both the city and the province worked hard for. What effects do you anticipate in terms of an influx of people and enterprises?

A: Now that Daejeon has been designated as an Innovation City, companies associated with public institutions in the Seoul area will move here and the enterprise-friendly conditions will encourage innovative businesses to move in.

Furthermore, corporations, universities and research institutes will build an innovation cluster centering on public institutions that are relocating to Daejeon. These institutions deal with railway transportation, science technology, knowledge industries, and small and medium-sized enterprises.

This will eventually lead Daejeon to become a new local growth pole, where a virtuous circle of expanding jobs and investments can be expected to happen.

Q: Regarding COVID-19 pandemic, Daejeon City attempted to support small-business owners and vitalize local businesses through its local currency, Ontongdaejeon. Do you have any similar plans for this year?

This year, to revitalize the local economy, the city administration is planning on issuing 1.3 trillion won worth of the local currency, up 100 percent from last year, and holding a huge event called “Ontong Sale” twice to encourage consumption.

To strengthen its distribution and policy functions, we also are planning to promote Ontongdaejeon as a policy brand representing our city through management systems like the Daejeon Metropolitan City Local Gift Card management committee and the Ontongdaejeon Working Group.

To expand the function of the Ontongdaejeon Mall, we are going to run a test bed of venture startups and social/local businesses, and support the increase of sales of small businesses through the expansion of new and policy businesses, such as e-coupons, regular subscription services and accommodations.

Besides, through the Ontongdaejeon Ontong-Hope Scholarship Assistance Project, the city is supporting a stable school life for low-income children with scholarships worth 200 million won combined.

A: The goal of the seventh elected administration of Daejeon is the safety and happiness of the citizens. The lesson that we learned the most from this COVID-19 crisis is that the city administration should protect people’s lives and be responsible for their future under all circumstances.

Over the remainder of our term, the high-tech future city of Daejeon will take a leap forward as a city that leads innovative growth in Korea.

Starting with the construction of the Chungcheong region megacity, we will lay the foundation of win-win cooperation as the hub and parent city of the central region’s megalopolis. Then we will strengthen the metropolitan city function to lead the balanced development of the nation.

Additionally, the administration will transform Daedeok Innopolis into a mecca for the Korean New Deal by building a digital convergence industrial complex. We will create a digital economy system for local industries by establishing a smart city based on DNA.

As for climate change, we aim to reduce carbon emissions by 30 percent by 2030 and to build a low-carbon urban living infrastructure.

The administration will make Daejeon into a healthy, vibrant and safe cultural city where people can enjoy culture and the arts, and where they can be healed and protected from all dangers in life.

Above all, the mature, wise civic awareness and cooperation that we saw during the COVID-19 crisis were of great help. Uniting all these forces, the administration will lead Daejeon to its destiny as a strong, great future city that leads the growth of Korea’s innovation.