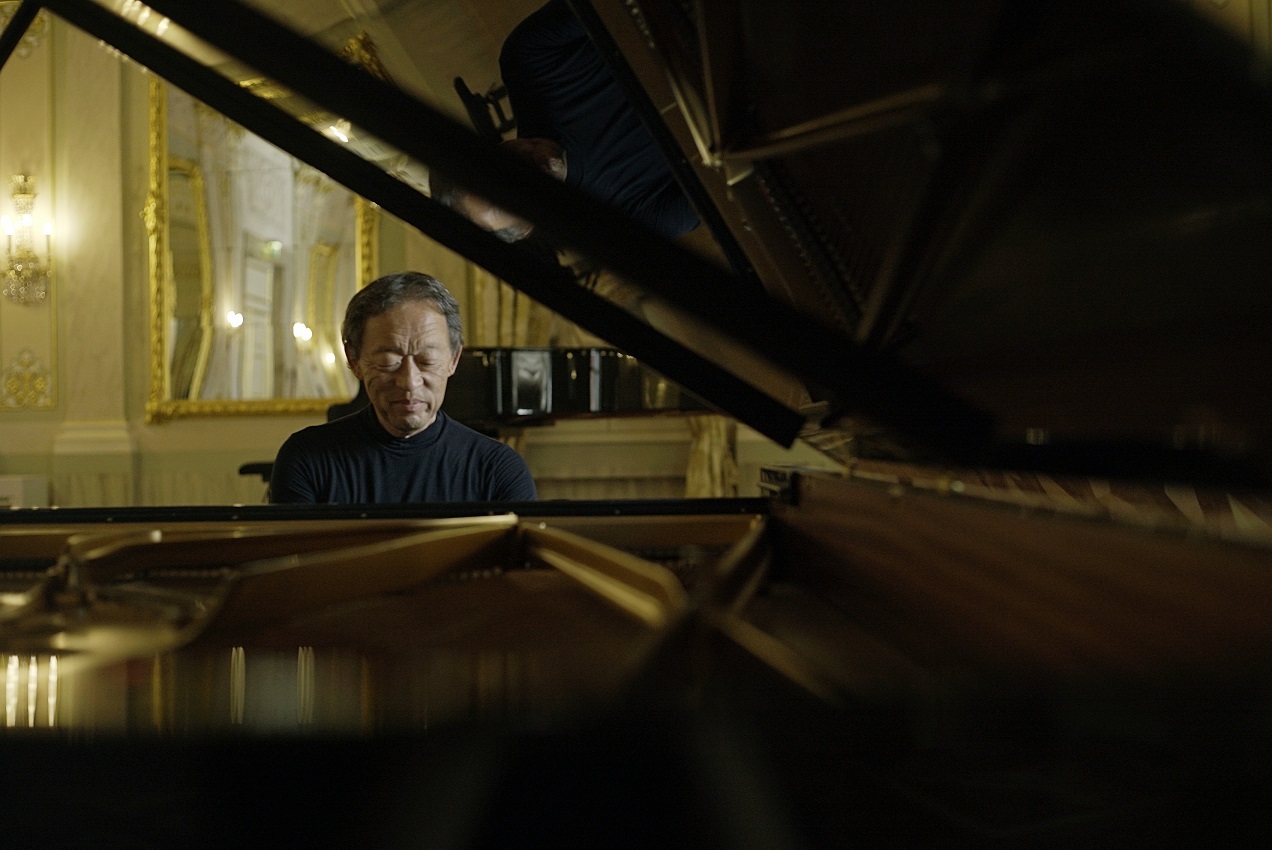 Chung Myung-whun plays the piano during a press conference held Thursday in Seoul. (Yonhap)
Maestro Chung Myung-whun is returning to the stage as a pianist with the release of his second piano album Thursday.

The recitals will focus on late piano works by Haydn, Beethoven and Brahms. In addition to Haydn’s Piano Sonata No. 60, Beethoven’s Piano Sonata No. 30 and Brahms’ 4 Piano Pieces, Op. 119 on the album, the recital will include Brahms’ 3 Intermezzi Op. 117. The works were all written by the composers in their 50s and 60s, late into their career, which resonates with the 68-year-old Chung.

“I played Haydn’s concerto the first time I performed, and Beethoven is the biggest giant so I couldn’t exclude him,” said Chung during a press conference held Thursday. “Brahms wrote grand symphonies and large-scale requiems, but his final pieces were intimate. I thought as he grew older, his feelings changed and there was a quieter beauty.”

While the theme of Chung‘s first piano album was “songs he wanted to play to his grandchildren,” Chung said his personal wish with the new album was “wanting to show the different aspects of life through music.” If he ever records another album, he said that he would name the album “Passion” and play for his wife, including her favorite song, Schumann’s Fantasie.

“In the most honest language that is music, the stage of life where I am at now is closer to the spiritual world than ever before. It is more magical and more full of love than ever before,” said Chung.

Although Chung is better known for his conducting career, he initially started out as a pianist and gained international fame when he was named a runner-up in the 1974 International Tchaikovsky Competition. He was the first South Korean to enter the competition and the first to receive a prize.

During his career as a conductor, he has rarely gone on the stage solely as a pianist, apart from a few invitational solo performances. Still, he never stopped playing the piano and had his first piano recital tour in Korea in 2014, 40 years after the Tchaikovsky Competition win.

“My first love was the piano. There are two things that I loved, the piano and chocolate. With the passing of time, chocolate has been replaced by family but the piano remains,” said Chung. “That is how much I am in love with the piano even if I didn’t perform much.”

However, Chung stressed that liking playing the piano and performing are two completely different things.

“I don’t think of myself as a professional musician anymore. That is all over,” said Chung. “I am not trying to show that I can play the piano this well.”

“A conductor isn’t a perfect musician. Someone who actually makes the sound of music are musicians. There were many emotions in my heart that I could express by playing the piano,” said Chung.

The maestro also emphasized the importance of putting in the time as a musician.

“When I conducted the Brahms Symphony No. 4, there were parts that I could not understand fully. And when I finally did, I realized I was the age Brahms was when he wrote it,” said Chung. “Of course, I cannot compare myself to the genius of someone like Brahms. I am saying that I have experienced the same length of time as a human being. It’s hard to explain. Only when time passes and you constantly study and put in the effort do you have that chance,“ he said. ”I like aging. I have never thought for a second about becoming younger.”

The global pandemic has brought the maestro’s recital to Korea sooner than expected. Chung spent most of 2020, when most orchestral performances were canceled, playing the piano, prompting his return to the stage with the piano.

Chung stepped down from his position as the Seoul Philharmonic Orchestra’s music director in 2015 after troubles with former SPO CEO Park Hyun-jung. He made clear at Thursday’s press conference that he no longer wishes to take a music director position in any orchestra around the world because he does not want the responsibility of having to improve the orchestra.

“There is a difference with me going as a guest conductor and taking a position there,” said Chung. “If you take up a position, you have to improve the orchestra using any method possible. When I go now, I am comfortable and happy. If there is a problem with the orchestra, it’s not my problem.”