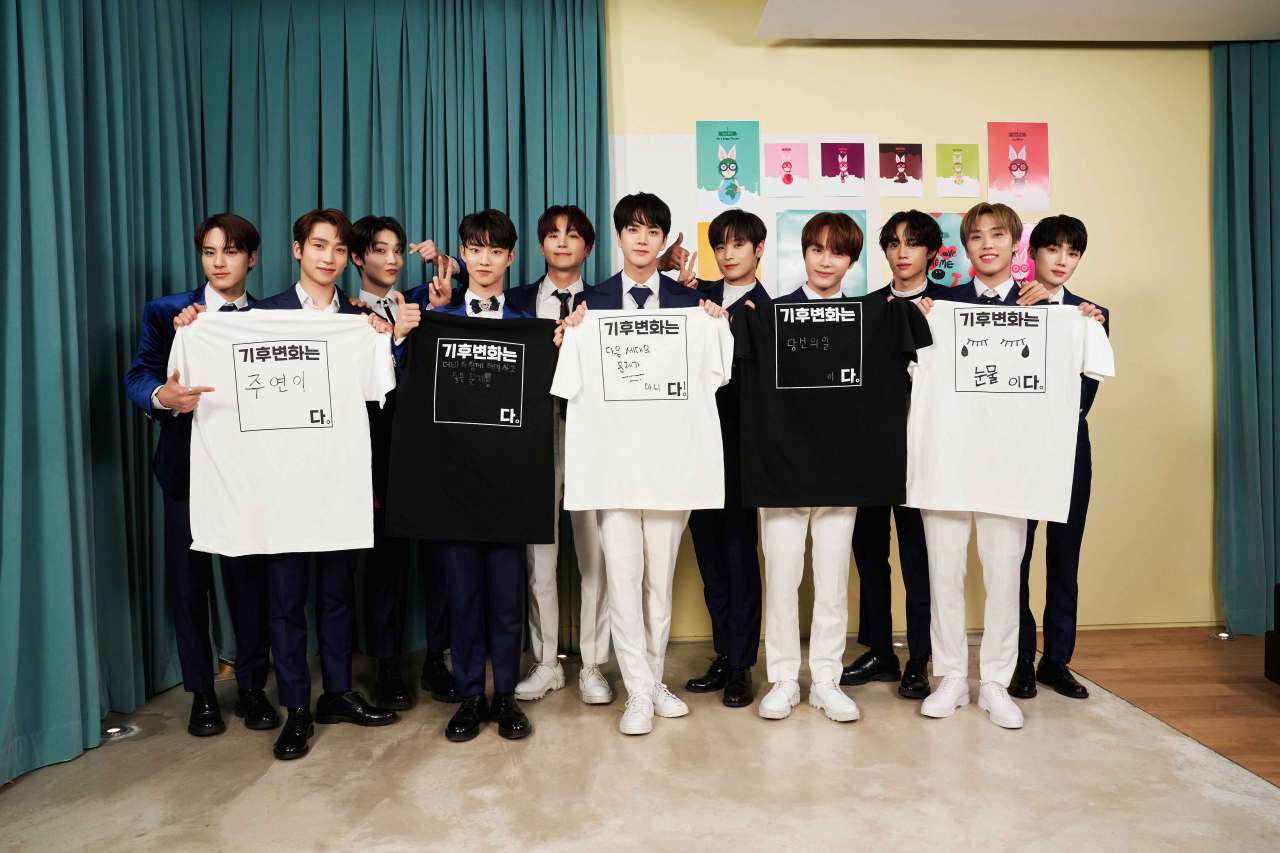 K-pop stars pose for a photo in T-shirts explaining what climate change means to them. (Climate Media Hub)
Popular K-pop stars joined hands in a campaign to highlight the dangers of climate change and call for bolder action on the defining challenge of the age, marking the 41st Earth Day on Thursday.

Some 31 members from seven K-pop groups including Oh My Girl, BTOB, Day6 and The Boyz shared their thoughts on climate change and encouraged their millions of fans around the globe to take part in climate action.

In the first video, released Thursday on the campaign’s official website, the idols define climate change in one sentence and explain what it means to them in their own words. Three more videos are to be released through the end of June. 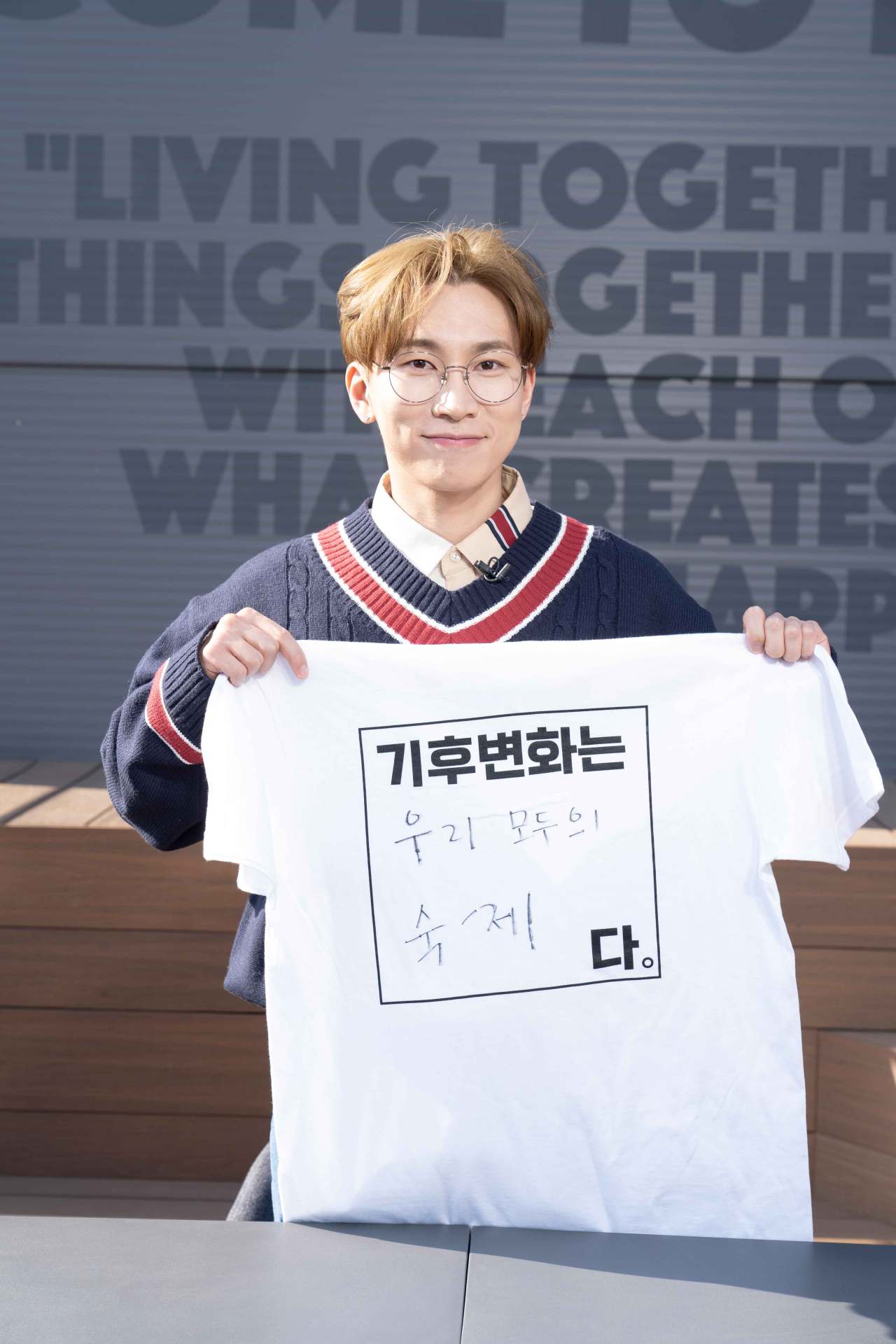 Seo Eun-kwang of BTB holds up a T-shirt that reads, “Climate change is everyone’s homework.” (Climate Media Hub)
“It’s a great honor for me to join, actually,” Seo Eun-kwang from BTB said, describing climate change as “homework for all of us” that cannot be delayed. “I’m very interested in environmental issues. I hope we will tackle climate change together.”

Hyojung from girl band Oh My Girl said climate change is “an issue to think about in order to be happy.” 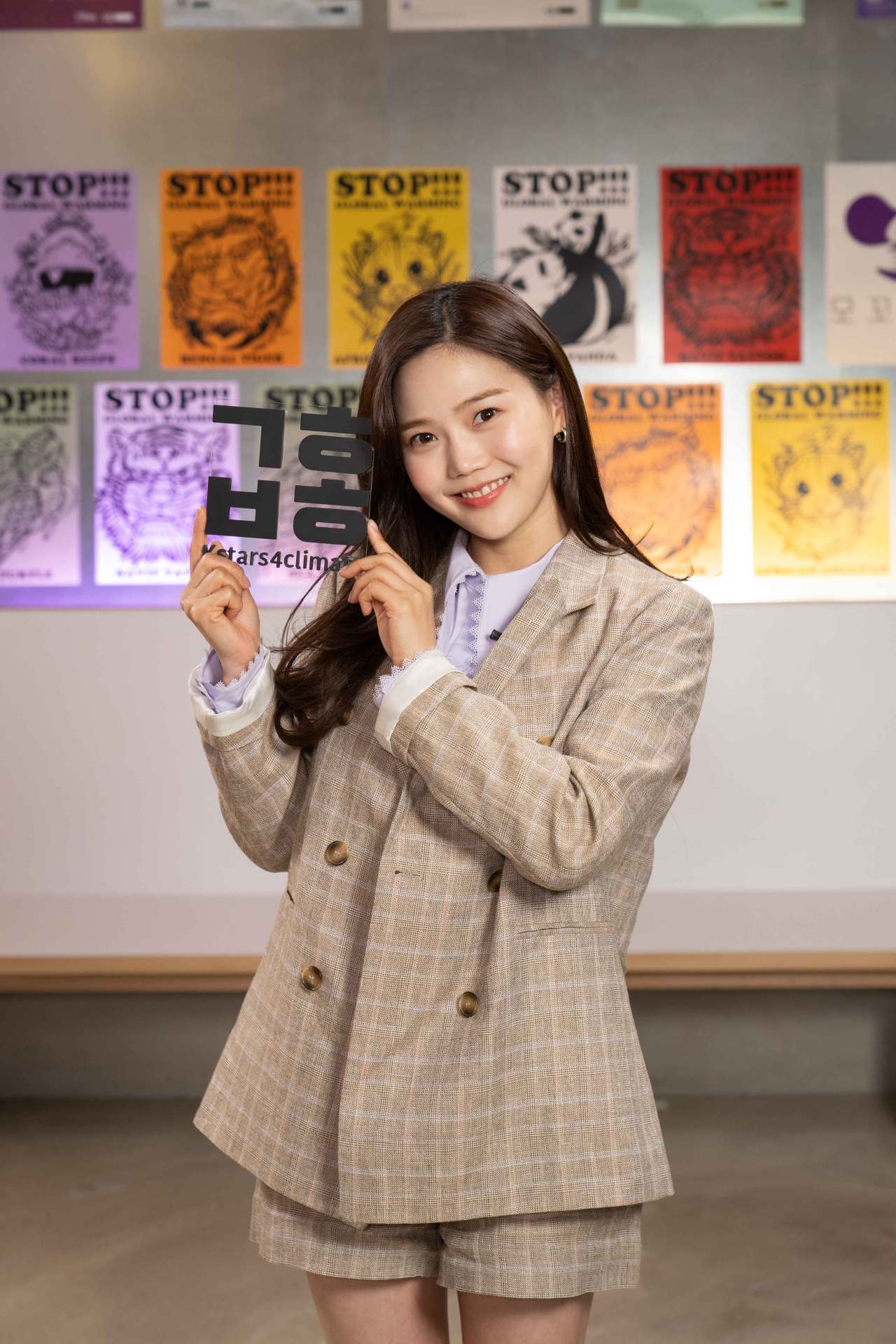 Hyojung from girl band Oh My Girl holds a sign showing the Hangeul abbreviation for "climate change." (Climate Media Hub)
“I believe our small actions for the environment can lead to a meaningful change. I hope more and more people will care about climate change, which needs global efforts to be tackled.”

Sponsored by the British Embassy in Korea and Climate Media Hub, the campaign -- called Kstars4climate -- is the first of its kind among K-pop groups aimed at raising awareness of climate change.

The K-pop stars’ campaign is expected to inspire millions of people to act on climate change on the back of the immense popularity of K-pop. There are an estimated 1,835 K-pop fan clubs in 98 countries, encompassing about 100 million members as of 2020.

They are the latest addition to a list of K-pop sensations that have raised their voice for climate action. Others include Blackpink, official advocates for the COP26, and Red Velvet, ambassadors of the UN International Day of Clean Air for blue skies. 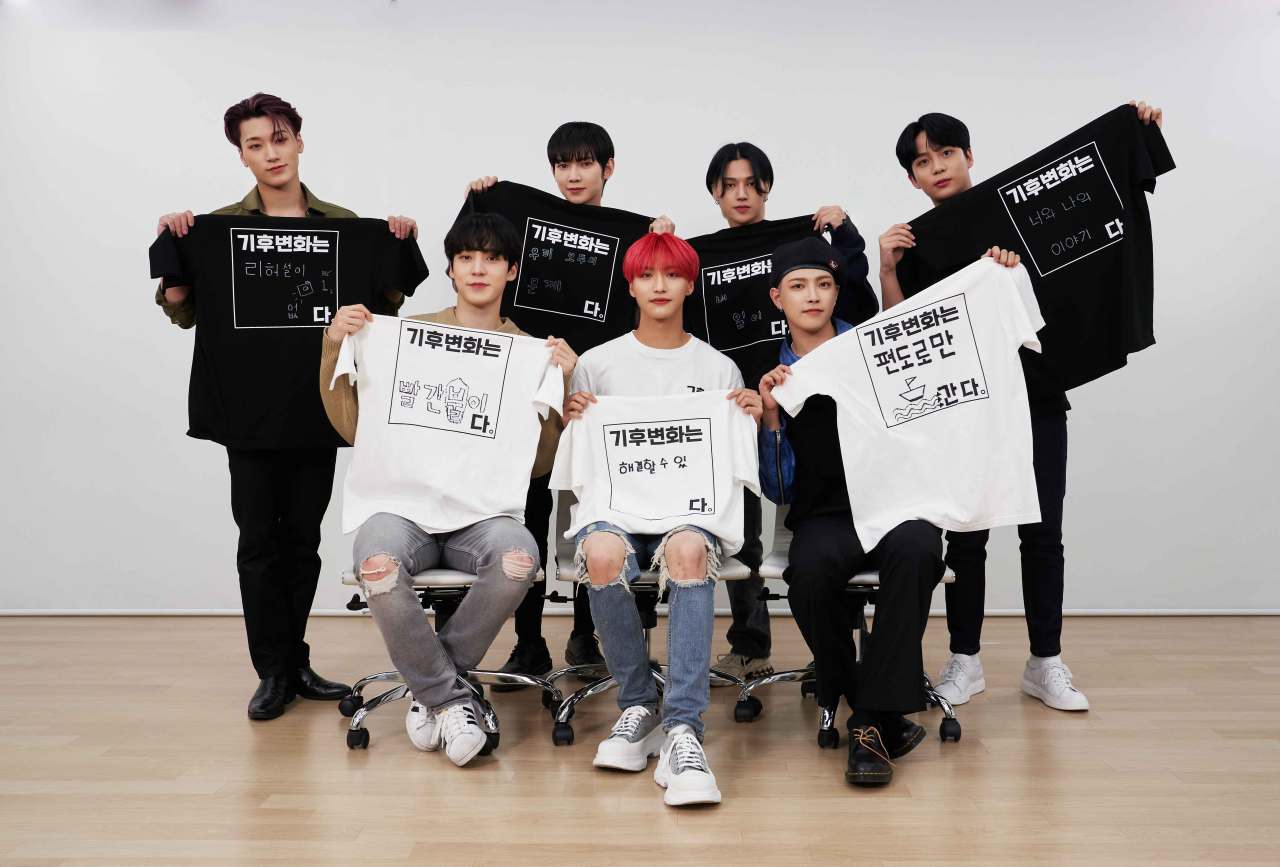 K-pop stars pose for a photo in T-shirts explaining what climate change means to them. (Climate Media Hub)
Heeding their favorite stars’ calls, like-minded K-pop fans around the world have created their own platform --Kpop4Planet -- to cheer on the global movement for climate justice.

Momentum for climate action seems to be building around the globe, with the ongoing coronavirus pandemic triggering soul-searching on human relationships with nature and other species. This year is also marked by significant events to address the climate emergency -- from the P4G summit in Seoul to the UN COP26 in Glasgow.

“It’s great to see more influential Korean voices like these speaking up for climate action,” said Simon Smith, the British ambassador to Seoul. “The climate crisis is the greatest challenge that we face, but it is within our power to address it. We all need to act now to protect our planet for future generations.”

Videos and photos of the Kstars4Climate campaign are available on the campaign’s official website, kstars4climate.com, as well as its YouTube channel and social media platforms with hashtag #Kstars4climate and the corresponding Hangeul hashtag.