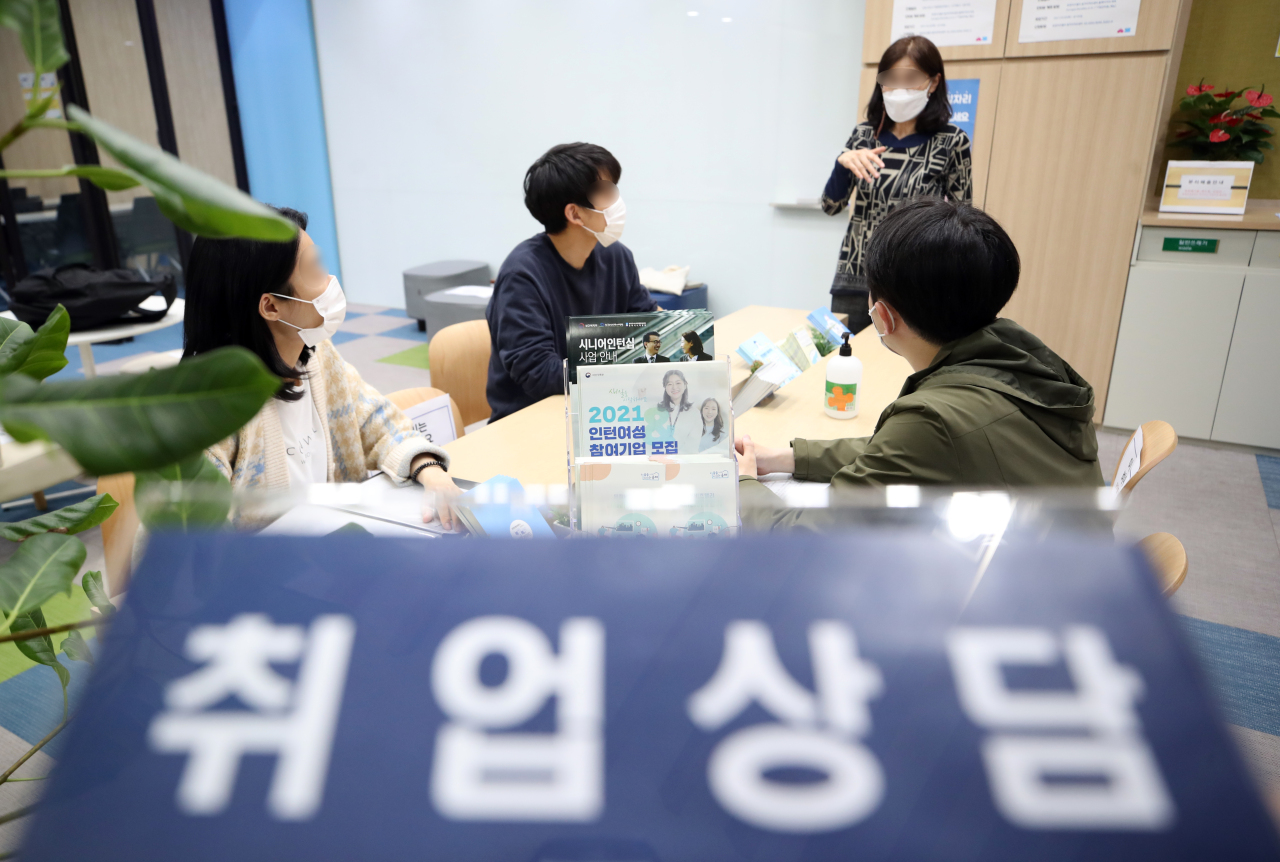 A labor consultant provides jobseekers with recruitment information at the Munjeong Biz Valley in Songpa-gu, Seoul, earlier this month. (Yonhap)
SEJONG -- Young Koreans in their 20s and early 30s have been frustrated with a tough hiring market, despite the Moon Jae-in administration’s pledge to prioritize job creation for the young generation.

It has been nearly four years since President Moon Jae-in took office. But labor indexes suggest that the administration’s performance in the employment sector has fallen far short of the expectations many young job seekers had in 2017.

The percentage of unemployment and underemployment among the people aged 15-29 was in a skeptical level steadily during the 2017-2019 period. The COVID-19 pandemic has worsened the hiring conditions in 2020 and early 2021.

When Moon took office in May 2017, the de facto (or extended-based) jobless rate -- which is based on the number of unemployed and underemployed in the economically active population -- stood at 22.9 percent in the 15-29 age group, according to the Supplementary Index III for Employment, held by Statistics Korea.

The Index III refers to the extended-based jobless rate, which reflects “underemployment” as well as unemployment. People deemed to be among the jobless include temporary employees who work fewer than 36 hours a week and want to work more hours, as well as seasonal workers who are out of work for part of the year. 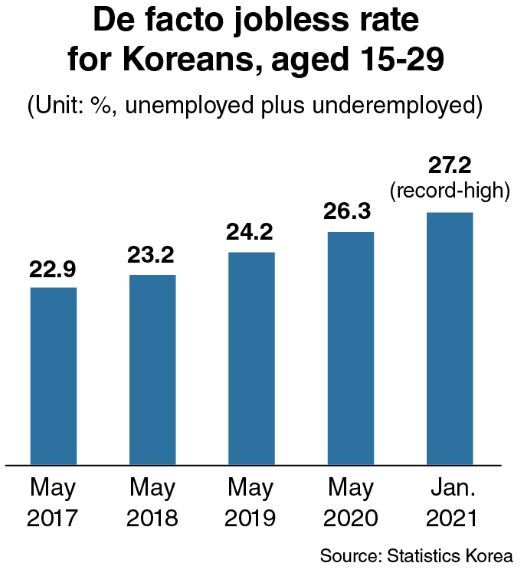 After reaching the all-time high of 27.2 percent in January 2021, it posted still high level of 25.4 percent as of March (the latest available), which means that 1 out of every 4 young Koreans are unemployed or underemployed.

As of last month, the number of de facto jobless among the youth reached 1.24 million of the economically active population, 4.91 million.

The figure contrasts with the “official” unemployment for those, aged 15-29, publicized by the government for the month, which have the tally for the jobless at just 426,000, or 10 percent in jobless rate.

The official government data is calculated in a conservative manner, by counting a large portion of temporary or contract workers as employed.

About a year ago, the Moon administration unveiled a road map to create 550,000 jobs, in a 10 trillion won ($8.9 billion) plan using mostly taxpayers’ money.

But many online commenters denounced the scheme, claiming that it would only create many nonregular jobs in the public sector and calling it another abuse of taxpayer money.

Since May 2017, the administration has spent about 50 trillion won on job creation nominally, in line with its electoral pledge to make 810,000 jobs in the public sector and ease youth unemployment during his term.

But these efforts produced a number of temporary jobs for the over-60s at public agencies, rather than increasing regular jobs for those in their 20s and 30s.

In May 2017, Moon showcased an electronic dashboard to the media, which was set up at Cheong Wa Dae for the purpose of monitoring the number of jobs created.

But the public have not seen the president pose beside the dashboard at any time in the four years since.

Some analysts say that their frustration has caused the situation that more and more young Koreans are actively engaging in investment in stocks and cryptocurrecies by taking out financial loans.