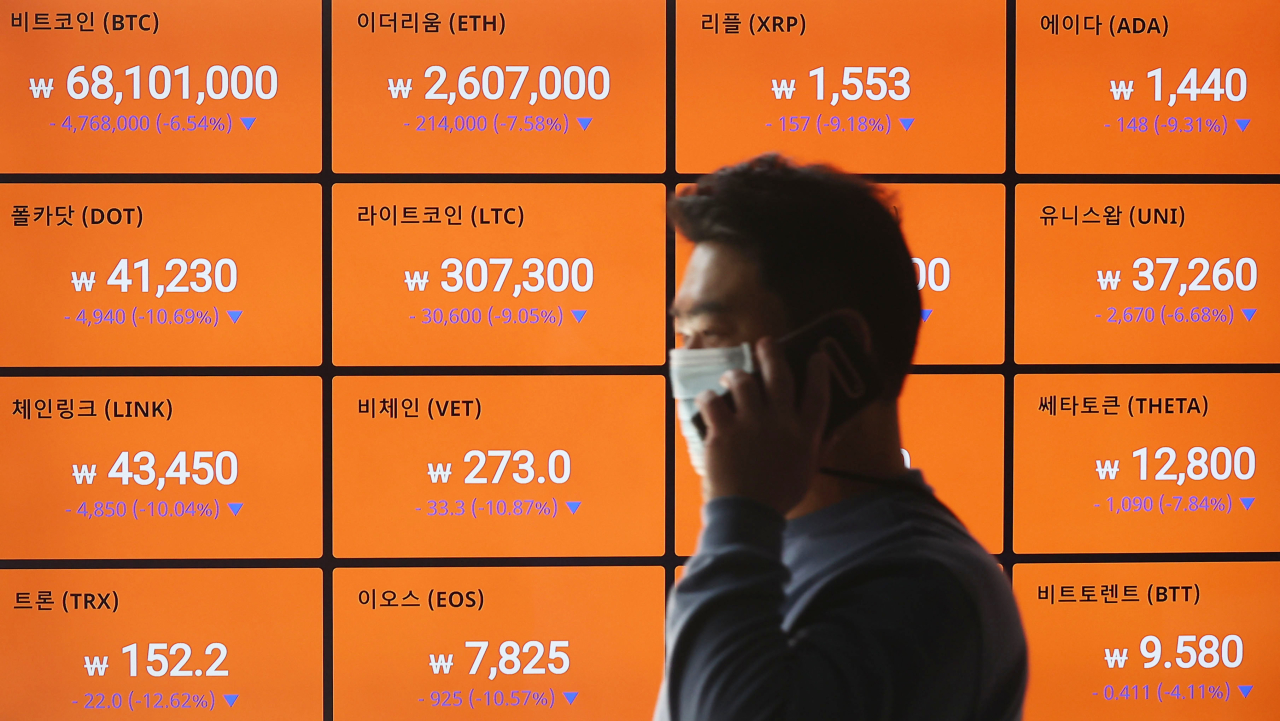 A man passes by digital boards displaying the prices of digital currencies at Bithumb, a Korean crypto exchange, Tuesday. (Yonhap)
Volatility in the local cryptocurrency market continued Tuesday, with most digital coins including Bitcoin suffering sellouts as authorities strengthen measures against suspicious trading.

The extreme volatility sent Bitcoin’s value from a record high of 82 million won ($73,722) April 13 to 67 million won Tuesday, falling below 70 million won for the first time since April 7. It recovered earlier losses in the afternoon, bouncing back up to reach 69 million won.

A market index developed by crypto exchange Upbit on Tuesday showed a downward movement of all digital coins listed on the exchange. The Upbit Market Index was down about 3.5 percent from 24 hours earlier at 2 p.m. and remained in negative territory throughout Tuesday morning.

Altcoins, digital coins other than Bitcoin, saw even more instability. The majority of altcoins fell on Tuesday. The second-largest, Ethereum, had dropped 3.5 percent to 2.69 million won as of 5:53 p.m. from 24 hours earlier, while Ripple lost almost 6 percent to 1,590 won, according to Upbit.

The plunge on Tuesday came a day after the government announced its plans to crack down on illegal transactions in the digital assets market as well as negative news that piled on recently.

On Monday, South Korea’s financial regulators said they had launched a special unit to detect suspicious trading in the interests of a sound market.

The much-anticipated US crypto trading platform Coinbase went public last week -- considered a hallmark event for the legalization of crypto assets -- but the debut was overshadowed by a rumored offloading of stocks held by some of the company’s executives.

Over the weekend, rumors that the US government would investigate financial organizations for possible money laundering using crypto assets also weighed down the overall market. The Turkish government on Friday said it was banning digital currencies from being used as payment.

By September, local exchanges have to find bank partners to use real-name accounts for their transactions. So far, the four largest exchanges -- Upbit, Bithumb, Coinone and Korbit -- have teamed up with local banks. But minor ones, of which there are an estimated 100 or more, are struggling to find partners as conservative banks that are burdened with the responsibility of evaluating the exchanges are still observing the volatile markets.