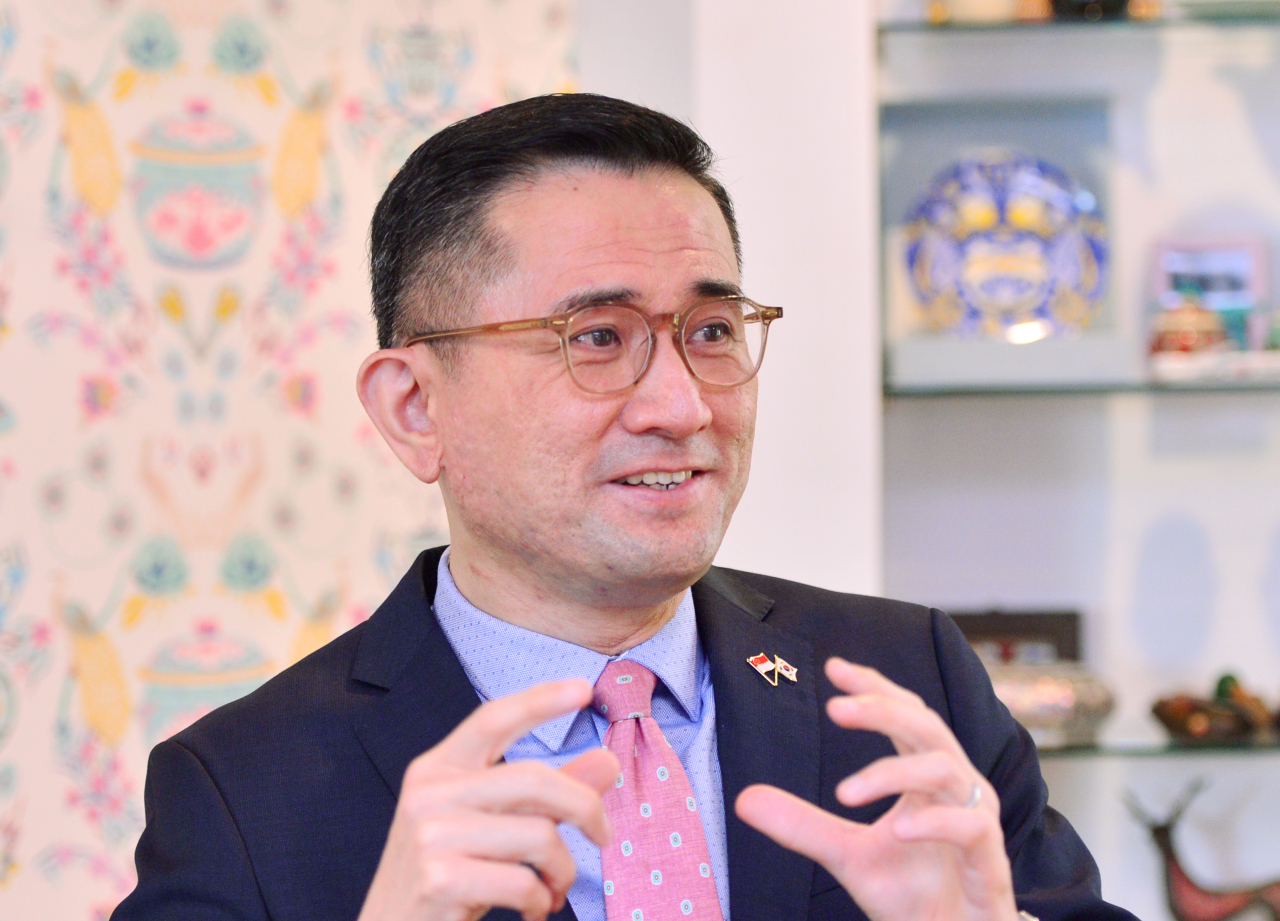 Singaporean Ambassador to Korea Eric Teo speaks during an interview with The Korea Herald on Thursday against a backdrop of a Peranakan patterned wall at the Singapore Residence in Seongbuk-dong, northern Seoul. (Park Hyun-koo / The Korea Herald)
Singaporean Ambassador to Korea Eric Teo recently received the Order of Diplomatic Service Merit (First Class) Gwanghwa Medal from the Korean government in appreciation of his service promoting Korea-Singapore ties.

It has been nearly two years since he arrived in Seoul, and a lot has changed in that time, owing to the virus pandemic affecting the world since early 2020.

Though the gateways between Korea and Singapore remain mostly closed for now due to the travel restrictions brought on by the pandemic, Teo hopes the two countries may soon be able to open their doors to each other. 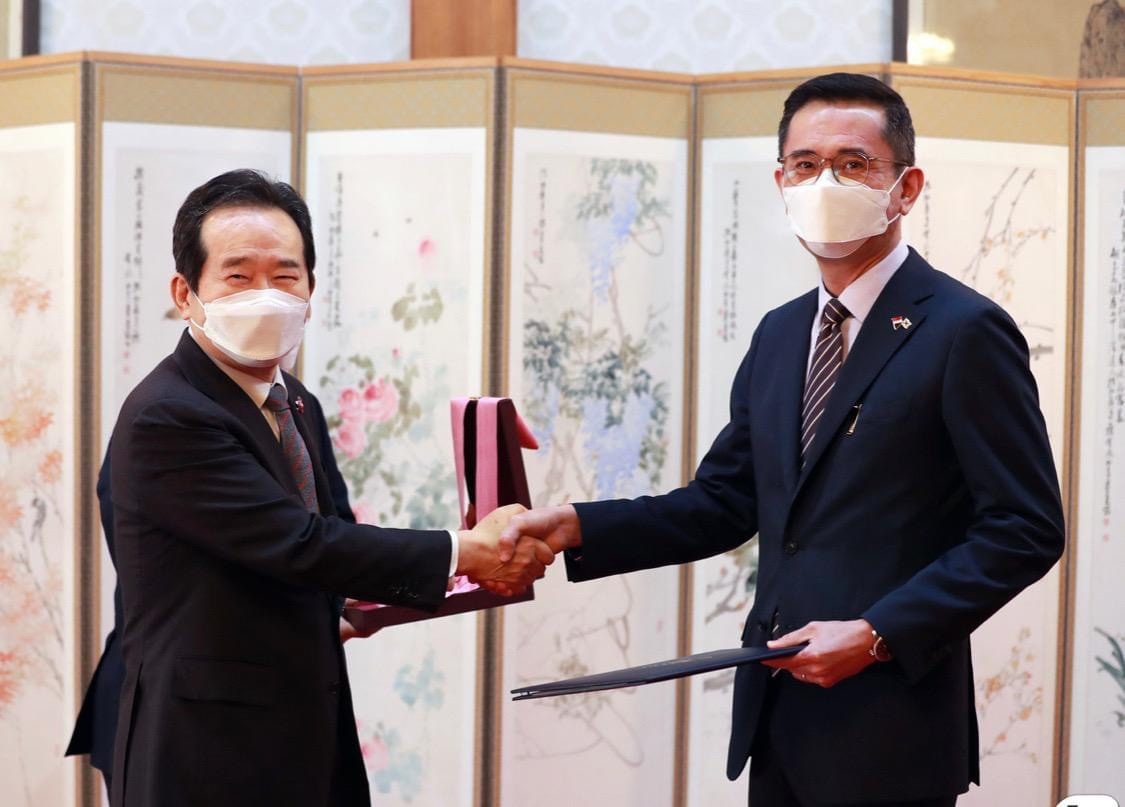 Singaporean Ambassador to South Korea Eric Teo (right) receives the Order of Diplomatic Service Merit (First Class) Gwanghwa Medal from Prime Minister Chung Sye-kyun, presented on behalf of President Moon Jae-in, at the prime minister’s residence in Seoul on March 31. (Embassy of the Republic of Singapore in Seoul)
“Many Koreans see Singapore as one of the top travel destinations,” Teo told The Korea Herald during an interview held Thursday at the Singaporean ambassador’s residence in Seoul.

“I am proposing to treat the discussion of the air travel bubble separately from the launch of it. [An] air travel bubble doesn’t just happen like that, you need time for the officials to discuss,” he said, stressing the need to “plan ahead.”

Singapore comes to this discussion with experience. The launch of a travel bubble between the country and Hong Kong, which was postponed from November to December 2020, has been postponed once again due to a spike in the number of COVID-19 cases in Hong Kong.

The two countries are now seeking to implement the bubble once again, which would become the third travel bubble in the world, following that between Taiwan and Palau and another between Australia and New Zealand.

“Now on average, we have about 15 to 25 cases (per day). More than 95 percent of these average cases are imported,” said Teo regarding the current COVID-19 situation in his country. As of Saturday, Singapore has reported 60,808 COVID-19 cases and 30 deaths since the first case in the country was reported on Jan. 23, 2020.

The Korean government is welcoming the discussion of a travel bubble, too.

In March, Finance Minister Hong Nam-ki said the government will seek to adopt travel bubbles in a bid to revive the demand for air travel, following a promise the previous month by Culture Minister Hwang Hee to plan travel bubbles once the Ministry of Food and Drug Safety approves rapid coronavirus tests.

“There is a number that we can work on, so that the risk is managed. Even in the air travel bubble agreement itself, there is a mechanism for both countries to review. If the numbers come up, we suspend it,” he said. “We are all aiming for public safety.”

Singapore is in talks with a few countries, including New Zealand, Australia, Taiwan, China and Brunei, about opening up air travel bubbles.

Along with the air travel bubble, vaccine passports are also mentioned when discussing tourism normalization.

“The mutual recognition of vaccine certificates is the same thing. The relevant authorities in Singapore and Korea can discuss first, then when you want to use this is a separate matter,” he said. “It is kind of related to the air travel bubble, but it can also be separate.”

“We want to open up step by step, but always in a safe way,” Teo said.