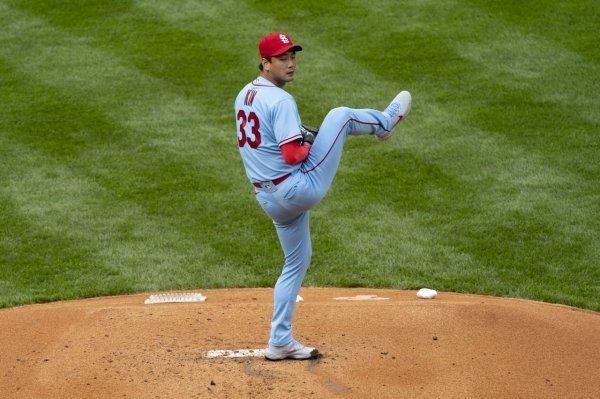 The left-hander started the game against the Philadelphia Phillies at Citizens Bank Park in Philadelphia on Saturday (US time), giving up three earned runs on five hits and one walk in three innings.

It was his belated first start as the sophomore southpaw began the 2021 season on the injured list due to a back injury after making some rough starts during spring training.

On Saturday, he went through a tough first inning.

After retiring the first two batters, he allowed two hits and a hit by pitch to lose the lead to the Phillies. Then he loaded the bases after walking J.T. Realmuto. But he got the third out after striking out Matt Joyce.

After a hitless second inning, Kim allowed two runs on two consecutive hits, a ground out and a sacrifice fly in the third.

Meanwhile, Kim took his turn at bat in the top third inning for the first time since his Major League debut in 2020.

He grounded out to Phillies pitcher Matt Moore in his first plate appearance.

As the Cardinals pulled off four hits including two homers in that inning, Kim was given a second chance to bat.

He reached the first base on a throwing error by the third baseman, and the third base runner scored to give the Cardinals a 6-1 lead over Phillies.

In the bottom fourth inning, Kim was replaced with Ryan Helsley.

The Cardinals added three more runs in the top fourth and gave up only one run in the fifth to wrap up the game 9-4.

The southpaw is in the final year of his two-year, $8 million contract with the Cardinals, signed following 13 years with the SK Wyverns in the Korea Baseball Organization (KBO).

Last year, Kim opened his rookie campaign as the closer but soon moved into the rotation. He finished with a 3-0 record and a 1.62 ERA in eight games, including seven starts. (Yonhap)