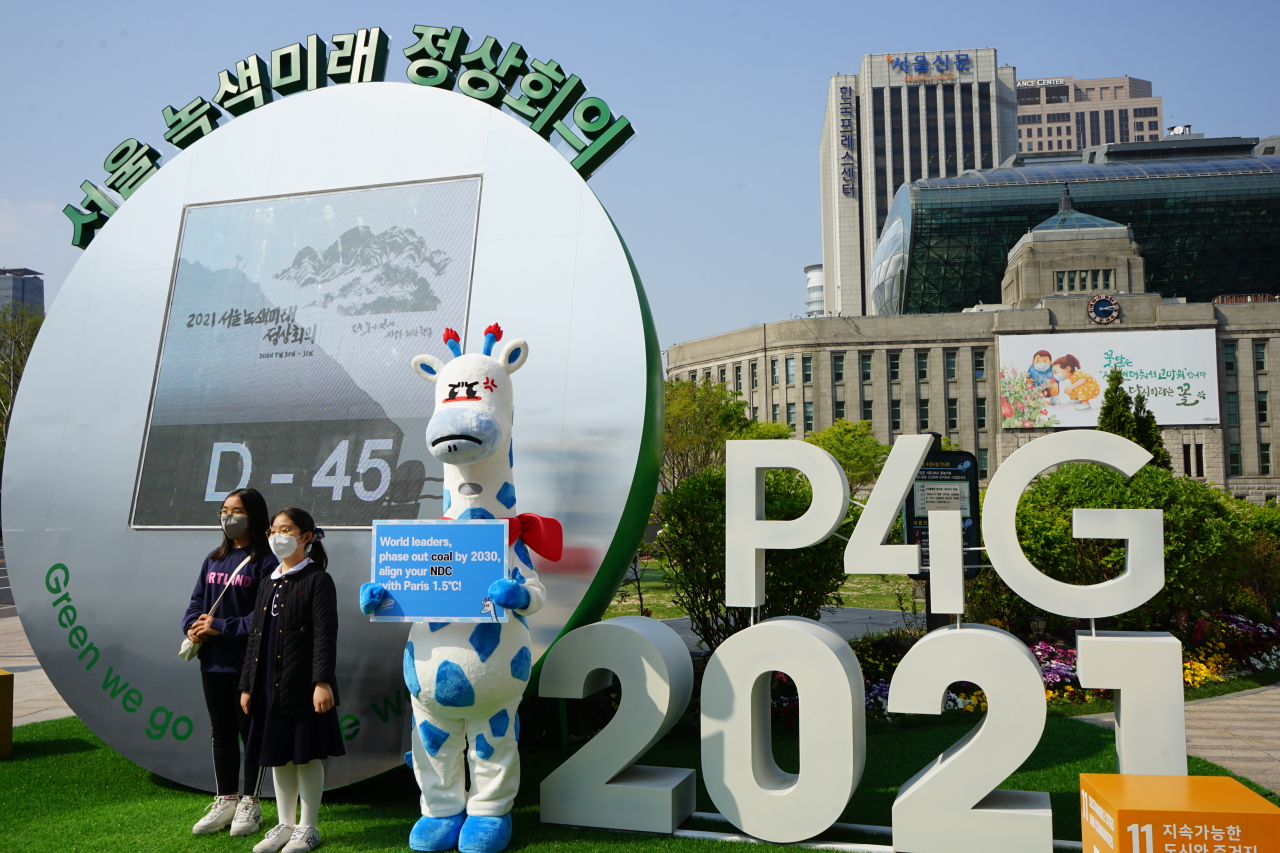 Kirini the blue-spotted giraffe holds up a sign in front of City Hall in central Seoul, calling on leaders to phase out coal by 2030 and keep their commitments under the Paris Agreement. (Korea Beyond Coal)
A coalition of South Korean environmental groups urged the government to declare its intention to go coal-free by 2030 at the upcoming US-led climate summit of world leaders, with a two-day campaign featuring a blue-spotted giraffe mascot.

President Moon Jae-in is among the 40 world leaders invited by US President Joe Biden to the Leaders Summit on Climate to be held online Thursday, where the leaders are expected to discuss how to limit global warming.

Seeking to reestablish his country’s leadership on climate change, Biden is expected to call on the other world leaders to follow their pledges under the 2015 Paris accord and expand their climate targets.

“The upcoming Biden Summit marks the first international summit of the year -- countries will be expected to announce ambitious climate targets. Korea, no doubt, will be in the spotlight as host of the P4G Summit,” said Park Jee-hye, director at Solutions for Our Climate, one of the organizations in the Korea Beyond Coal campaign.

“If Korea comes empty-handed without 1.5 C-aligned Nationally Determined Contributions, it would be an international embarrassment.”

This year is marked by significant events in the global fight against climate change amid growing calls around the globe for bolder climate actions to keep the world from warming by more than 1.5 degrees Celsius from preindustrial levels.

In May, the P4G summit -- Partnering for Green Growth and the Global Goals 2030 -- will be held in Seoul, bringing together leaders of government, business, civil society and academia to foster sustainable growth through innovative public-private partnerships. In November, the UN Climate Change Conference, also known as COP26, is to be held in Glasgow. 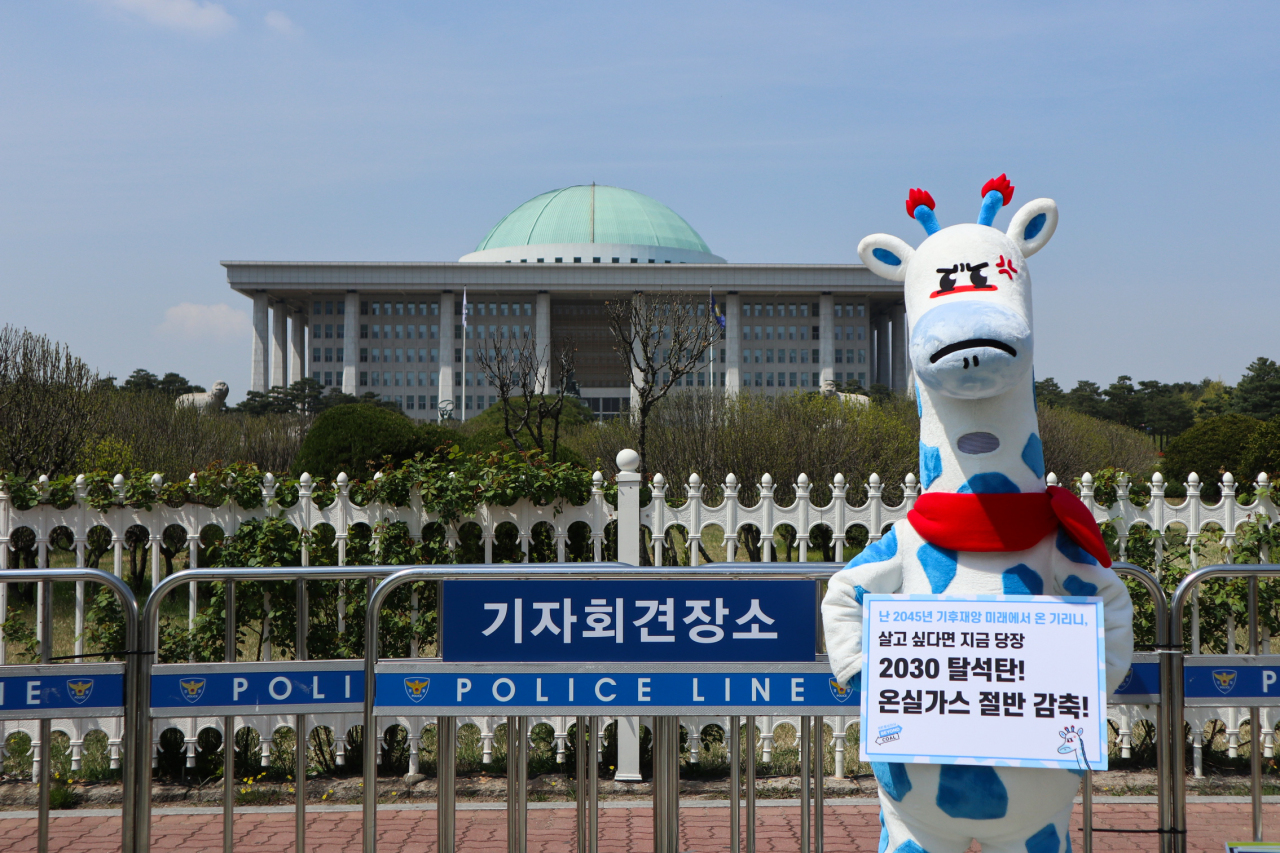 Kirini the blue-spotted giraffe holds up a sign in front of the National Assembly in southwestern Seoul. It reads, “2030 coal phaseout! Cut greenhouse gas emissions in half!” (Korea Beyond Coal) 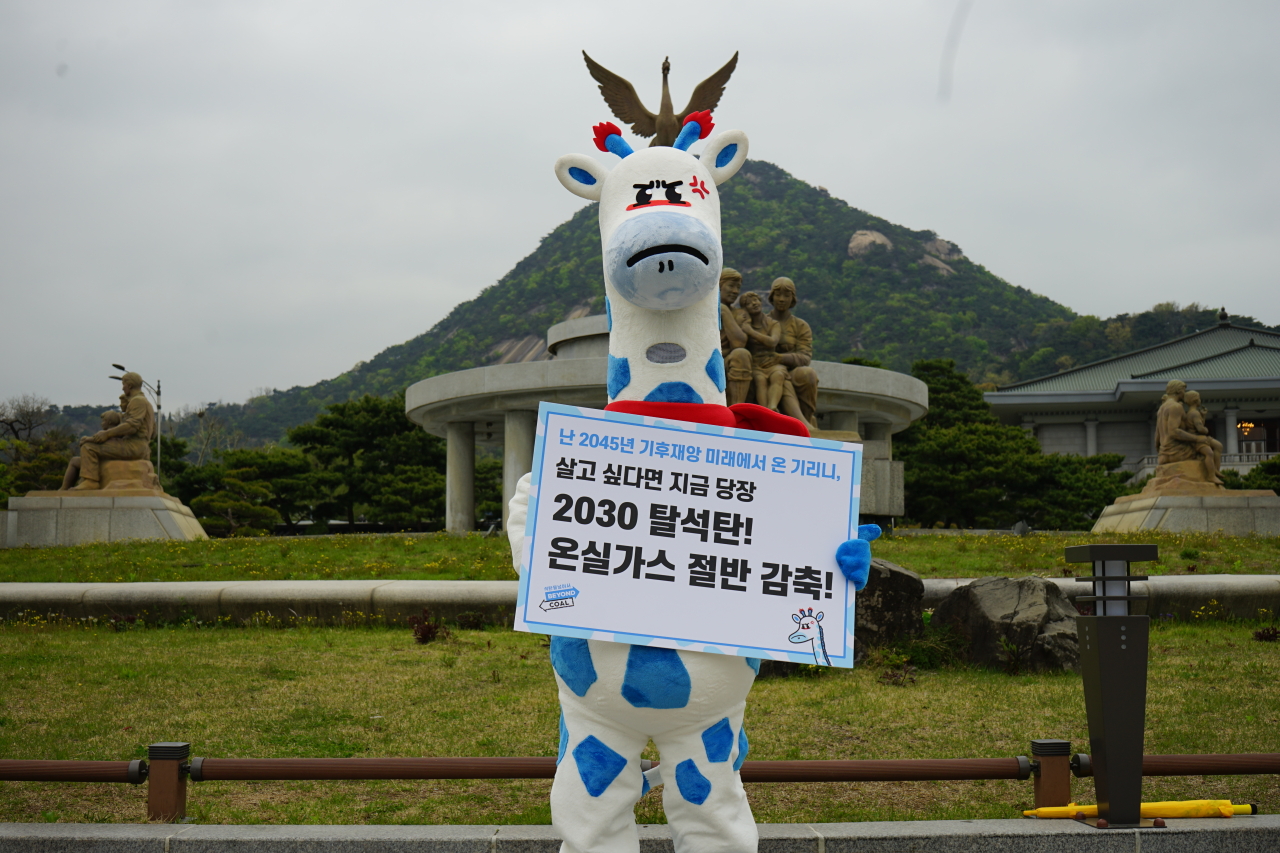 Kirini the blue-spotted giraffe holds up a sign in front of the presidential office in central Seoul. It reads, “2030 coal phaseout! Cut greenhouse gas emissions in half!” (Korea Beyond Coal)
Urging Korea to make bolder commitments to combat the climate crisis, the giraffe mascot, Kirini, was seen at symbolic landmarks in Seoul on Thursday and Friday -- from the National Assembly to the presidential office.

“Kirini is a giraffe that’s traveled back in time from the year 2045 to combat the climate crisis -- which has turned its skin blue,” said Arin Jeong, one of the creators of the mascot designed by Korea Beyond Coal, a civic network calling for a coal phaseout by 2030.

Korea, the world’s seventh-largest emitter of carbon dioxide, pledged to achieve carbon neutrality by 2050 and laid out the Green New Deal policies to accelerate its transition to a low-carbon economy.

However, the government has not yet presented a detailed action plan or timeline for its ambitious climate goals. No declaration has been made on the phaseout of coal, with the country’s continued investment in overseas coal power projects drawing criticism.

“Korea needs to reduce greenhouse gas emissions by at least 50% and beyond in 2030 below 2010 levels,” said Korea Beyond Coal in a joint statement. “An expedited strategic plan to phase out coal power plants, which according to the current administration’s plan will be operating until 2054, by 2030 is imperative.”