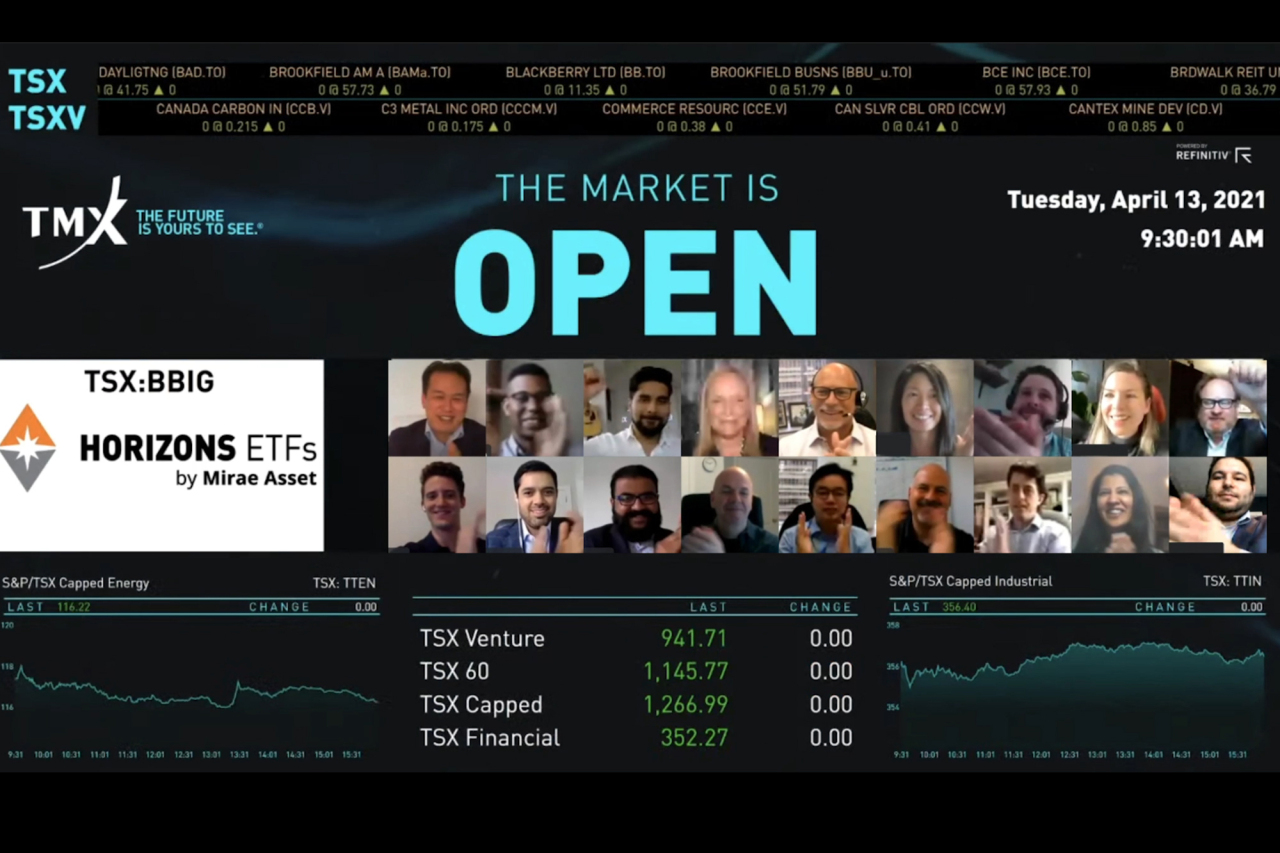 An online event to celebrate the listing of new ETFs, including those tracking Bitcoin futures, by Canadian investment firm Horizons ETFs on Tuesday in Canada. (Mirae Asset Global Investments)

Along with the Bitcoin-based ETFs it also rolled out a fund investing in stocks in the battery, bitotechnology, internet, and gaming industries, often collectively referred to as the BBIG sectors.

Of the newly launched cryptocurrency ETFs is an inverse product, called BetaPro Inverse Bitcoin ETF, which profits when bitcoin’s value declines--the first of its kind in the North American market. The inverse product as well as another crypto ETF, named BetaPro Bitcoin EFT, does not directly invest in the crypto asset but in bitcoin futures traded on the Chicago Mercantile Exchange.

“Buying HBIT and BITI is as easy as buying any stock or other ETF through a broker, and doesn’t require investors to open up separate cryptocurrency accounts,” said Steve Hawkins, chief executive officer of Horizons ETFs, in a press release. “Additionally, BITI will offer a way for investors to achieve ‘short’ exposure to bitcoin without having to use a margin account or shorting futures directly.”

Regulators in most global markets, including the US and South Korea, have rejected listing applications of cryptocurrency ETFs due to concerns about manipulation and criminal activity. Canadian financial authorities, however, have been taking a lenient approach toward cryptocurrency-linked ETFs.

The BBIG-focused product tracks the Solactive Global BBIG Index, consisting of top 10 market cap companies of the four segments in global markets including Korea and Taiwan.

The new ETFs can be traded in Canadian or US dollars via foreign stock trading platforms run by local stock brokers like Mirae Asset Securities.

Horizons ETFs, acquired by Mirae Asset Global Investments in 2011, is one of the four largest EFT firms in Canada, operating 93 EFTs whose value reached some 18.8 trillion won ($16.8 billion) as of last year.