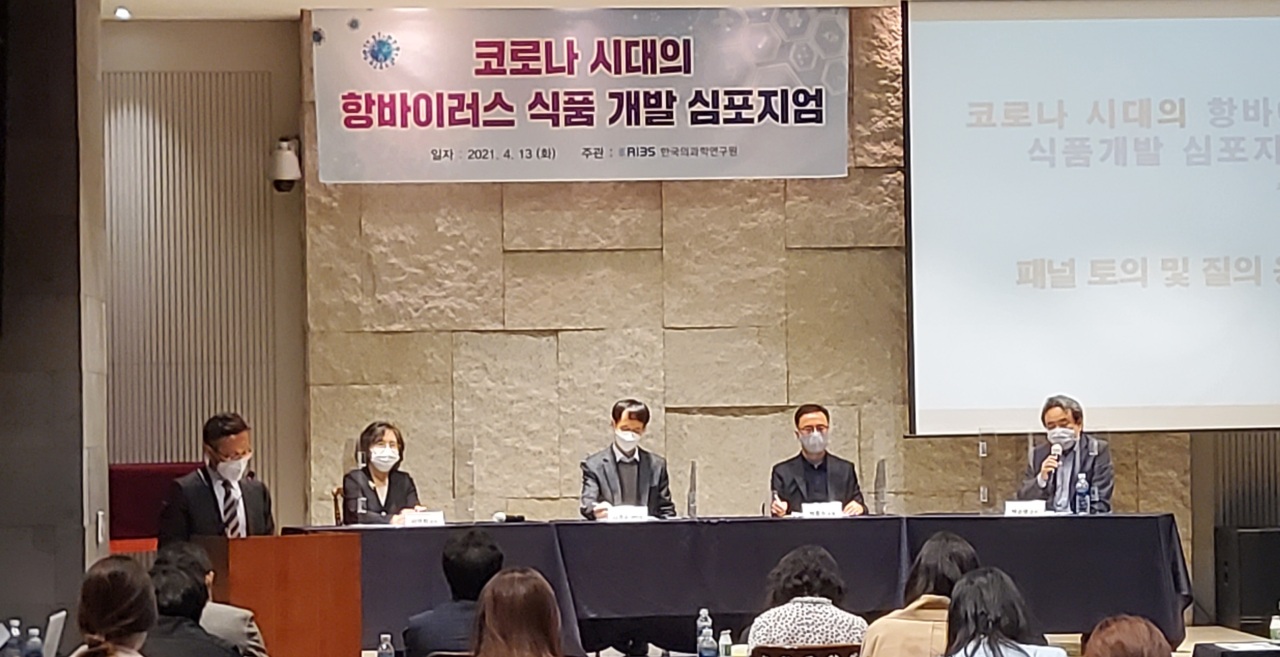 A panelist speaks at a product development symposium hosted by the Korea Research Institute of Bio-medical Science on Tuesday, focusing on antiviral products for the coronavirus age. (Namyang Dairy Products)
Namyang Dairy Products, a major dairy producer here, has come under fire for claiming its yogurt drink prevents COVID-19.

At a symposium hosted by the Korea Research & Institute of Bio Medical Science on Tuesday, the head of Namyang Dairy’s internal research institute presented the results of its research on Bulgaris, the firm’s yogurt drink.

“We’re the first firm in the country that has discovered fermented dairy products are effective in preventing influenza and COVID-19 viruses,” Park Jong-su said during the symposium.

“Our experiments showed that Bulgaris helped remove the influenza A (H1N1) virus at a 99.999 percent rate of success, and the COVID-19 at a 77.8 percent success rate,” Park said, adding that the coronavirus test was conducted using lung cells from monkeys.

The news boosted sales of Bulgaris and the company’s shares.

While the product was sold out in local retail stores and online grocery sites, Namyang Dairy’s shares went on a roller coaster ride Wednesday, touching 489,000 won ($438) at one point, up 28.6 percent from Tuesday’s close, and closing at 360,500 won.

But the whirlwind quickly died down as the country’s health authorities and other experts questioned the credibility of the claim, saying it had not even been demonstrated in clinical trials.

The experiment, conducted by a lab research team at Chungnam National University Veterinary College, involved pouring the Bulgaris drink on lung cells from monkeys. The research was funded by the dairy company.

The Korea Disease Control and Prevention Agency said tests on humans must be carried out to find out whether a food item is effective in preventing or curing COVID-19.

“What the researcher announced was a result of an experiment where a product has been put on the virus itself. It does not mean the product can destroy the virus when it is inside a human body,” an official from the agency said.

Experts also questioned the company’s intentions in releasing the test results to the public, as many drugs have been shown to neutralize the influenza virus in lab tests.

“Globally, there are hundreds of drugs proving to be effective in treating diseases when tested on cells or in vitro, but most of them turn out to be not really effective on human bodies,” professor Jung Jae-hun of Gachon University said in a local radio interview.

If Namyang is found to have released the research results for marketing purposes, it could face legal consequences for misleading customers. The act is tantamount to a violation of product labeling laws and is punishable by up to 10 years imprisonment or a fine of up to 100 million won.

The Ministry of Food and Drug Safety said it will conduct an investigation into the company.

Namyang may have violated the Korean Capital Market Act as well, for leaving out important details that could affect its share prices. The Korea Exchange is also looking into the case to see if Namyang breached fair trade laws.

Following the controversy, Namyang said it had been open about the limitations of the experiment.

“We shared the results of the research because we found it was meaningful that food can have effects in removing the coronavirus,” a Namyang official said.

“We did mention that there are limitations to the experiment as it was done at the cellular level, during our presentation at the symposium.”