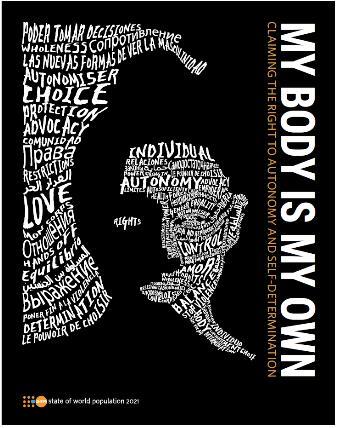 The image provided by the UN Population Fund (UNFPA) shows the cover of the UN agency's annual report on the State of World Population released in April 2021. (UNFPA)
South Korea continues to have the lowest birthrate in the world this year amid fast growth of its elderly population, a United Nations report showed Tuesday.

The country's total fertility rate per woman amounted to 1.1 in 2021, unchanged from a year earlier, according to the report from the UN Population Fund (UNFPA).

The fertility rate refers to the average number of children each woman is expected to give birth to over her lifetime.

South Korea's rate is the lowest among all 198 countries surveyed and is far lower than the global average of 2.4, according to the UNFPA.

"While the country continues to see a low fertility rate and fast aging of the population, the proportion of its population aged between 0-14 years came to 12.3 percent, which is the same with that of Japan and about half of the global average of 25.3 percent," the UNFPA said.

No country has a smaller proportion of the young population than South Korea and Japan.

The proportion of people over 65 came to 16.6 percent of South Korea's overall population, sharply up from 15.8 percent a year earlier, according to the annual report.

Globally, people 65 and older only took up 9.5 percent of the total population, tallied at some 7.87 billion.

Japan had the world's largest proportion of elderly at 28.7 percent, slightly up from 28.4 percent in 2020, followed by Italy and Portugal at 23.6 percent and 23.1 percent, respectively.

Their North Korean peers, on the other hand, had life expectancies at birth of 69 years for males and 76 for females, according to the UNFPA report.

The maternal mortality ratio, or the number of maternal deaths per 100,000, came to 11 in South Korea, compared with 89 in North Korea.

South Korea's overall population currently stands at 51.3 million, while that of North Korea is at 25.9 million. (Yonhap)