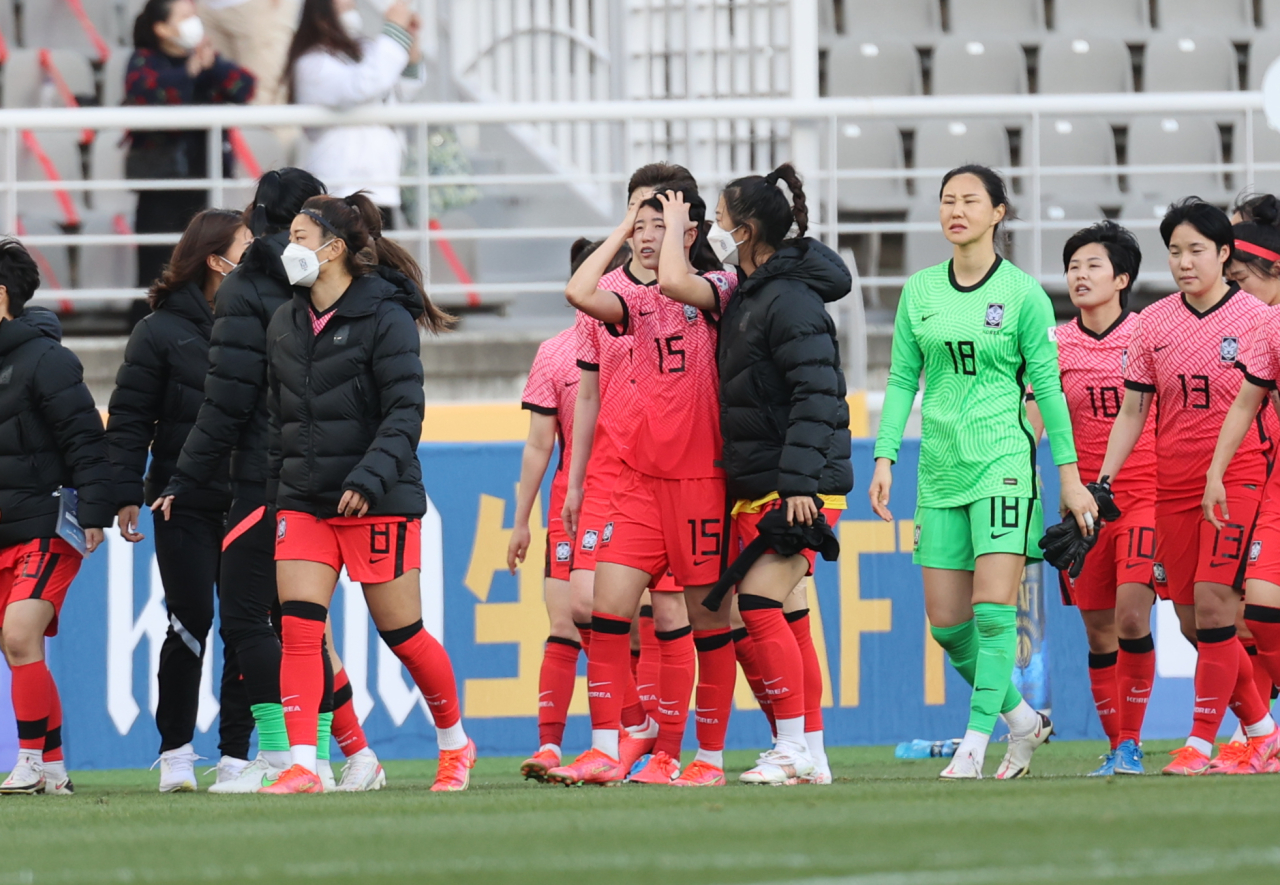 South Korean players react to their 2-1 loss to China in the teams' Olympic women's football qualifying match at Goyang Stadium in Gyeonggi Province on Thursday. (Yonhap)
One loss, however crushing it may be, won't end South Korea's dream of playing in the women's football tournament at this year's Tokyo Olympics, head coach Colin Bell said Thursday.

Bell's charges lost to China 2-1 in the opening leg of the Olympic women's football qualifying playoffs at Goyang Stadium in Goyang, just northwest of Seoul. Wang Shuang's 73rd-minute penalty was the difference in a hard-fought contest.

Down by one goal in the aggregate score and by two in away goals, South Korea face an uphill battle in the second leg, set for Tuesday at Suzhou Olympic Sports Centre in Suzhou, China.

In case of a tie in the total score, the team with more away goals will hold the tiebreaker. This means South Korea must take the next match by at least 3-2. A 2-1 South Korean victory will set up extra time because the two sides will be deadlocked in both the aggregate score and the away goals. A 1-0 win won't suffice for Bell's team.

In his postmatch press conference, Bell lamented that South Korea "gifted them both goals." The first score, by Zhang Xi in the 33rd minute, came after a momentary lapse of concentration in the box. The second-half penalty was awarded after a physical challenge by Son Hwa-yeon on Tang Jiali.

"We made our lives even harder and more difficult, which was totally unnecessary," Bell said. ""We should have at least had a 1-1 draw. The girls dominated in the last 15 to 20 minutes. We had some good passages of play. In the second half, I can't remember a chance for China in the second half apart from the penalty."

"So we just have to look at the game and pick out the moments and the areas that we need to improve, and also identify the areas that China have the weaknesses that we can exploit a little bit better," Bell continued. "And we know of course, yes, it's a tough one, but it's not impossible."

This was South Korea's first international match in over a year, as these playoffs, initially set for February last year, were postponed multiple times due to the coronavirus pandemic. Bell said his players were admittedly rusty in certain situations, but getting this one match under their belt should set them up nicely for the next one.

"We have to obviously speed up decision making," the coach said. "We still have a second game to play. It's halftime. So I'd send a message out to China that they don't need to book a hotel in Tokyo just yet."

Ji So-yun, the South Korean captain who set up the team's only goal, echoed the coach's message.

"We were running on fumes toward the end, and we have trouble controlling the gap on defense," Ji said. "But this is not over yet. We have to recover and try to win one in China."

South Korea are now winless against China in their last six meetings with one draw and five losses, and have scored just two goals in that stretch. (Yonhap)