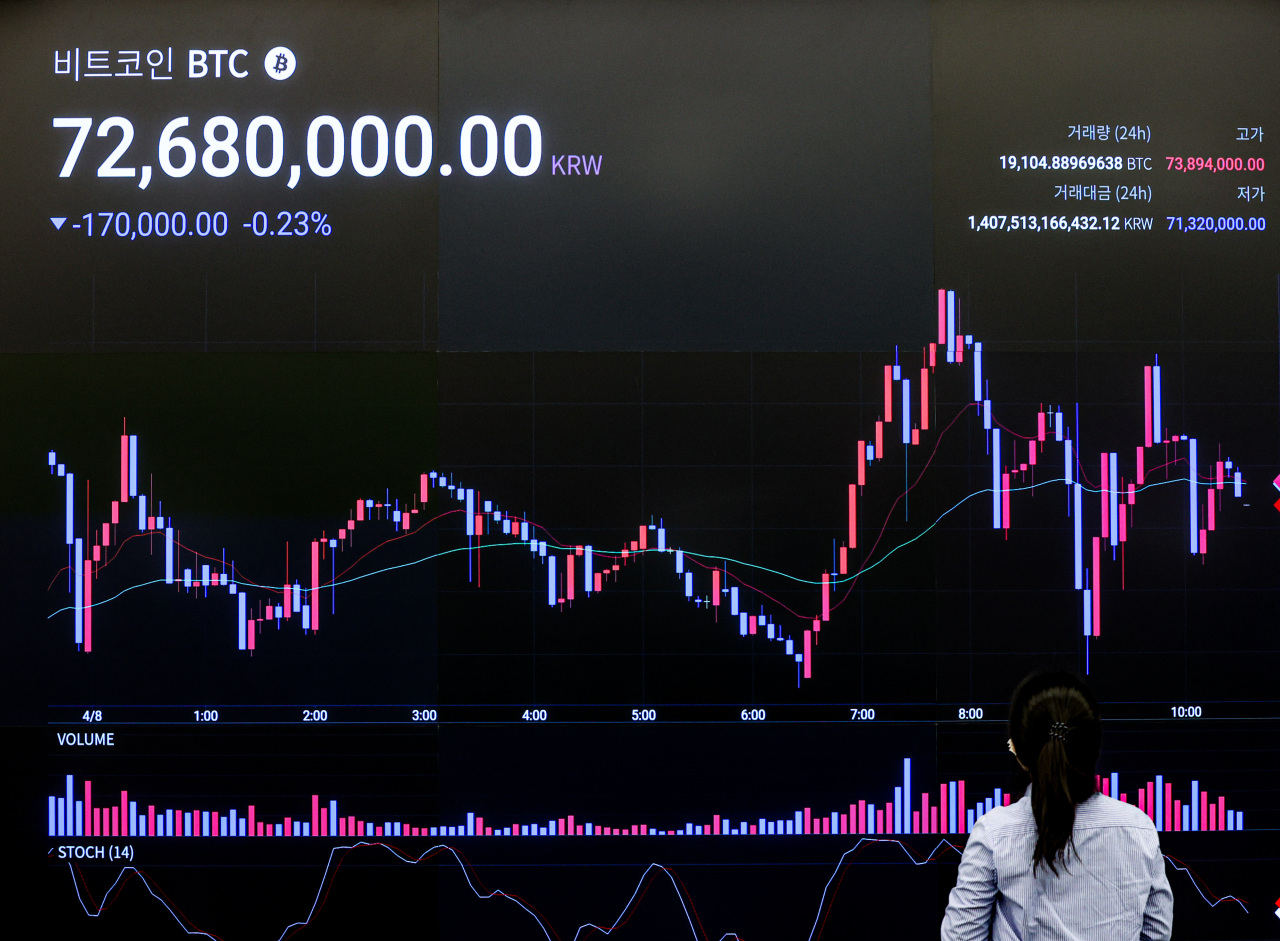 A woman looks at a digital board that shows the price of a bitcoin on Thursday at the Upbit office in Seoul. (Yonhap)
Bitcoin prices remained unstable Thursday after falling more than 10 percent late Wednesday in a roller-coaster movement that coincided with the government’s warning and a widening price gap with overseas exchanges.

The price for a bitcoin stood at about 71 million won ($63,600) as of 3 p.m. on Thursday, falling from 79 million won a day ago. The price of the largest cryptocurrency climbed sharply in recent days especially in domestic markets, showing a widening “Kimchi premium,” referring to the price difference between Korean and global exchanges. The price differential soared to a three-year high of 22 percent Wednesday, but the gap narrowed as the bitcoin price began to tumble to reach as low as 68.5 million won in the evening.

“The correction in the bitcoin price could be driven by a high Kimchi premium and might be part of the gap-narrowing process,” said Han Dae-hoon, an analyst at SK Securities.

The dramatic price decline coincided with the government raising the alarm late Wednesday regarding illegal activities in digital coin markets. The announcement was made at a meeting among a group of government officials from the Financial Services Commission, Ministry of Economy and Finance, Ministry of Justice and National Policy Agency, who gathered to discuss broader issues related to digital assets.

During the meeting, the government vowed to closely monitor the market, especially illegal activities such as price-fixing, money laundering and tax evasion. The government bodies will jointly cooperate not only with each other, but also with international organizations such as the International Criminal Police Organization to crack down on illegal activities related to virtual asset transactions through overseas exchanges.

The government also warned investors on the possible shutdown of digital asset businesses as some of them are expected to fail to register by Sept. 24, the deadline for existing businesses to get registered under the revised Act on Reporting and Using Specified Financial Transaction Information.

It was also stated that the government will carry out necessary steps such as securing transaction details ahead of taxation on income from the cryptocurrency market starting from January next year.

“Digital assets are not legal currency nor financial products and no one can guarantee the value,” said Moon Seung-wook, second vice minister of the Government Policy Coordination Office. “Therefore, investors should be aware of high volatility due to illegal and speculative activities or changes in regulatory environments at home and abroad, which could lead to a significant loss.”