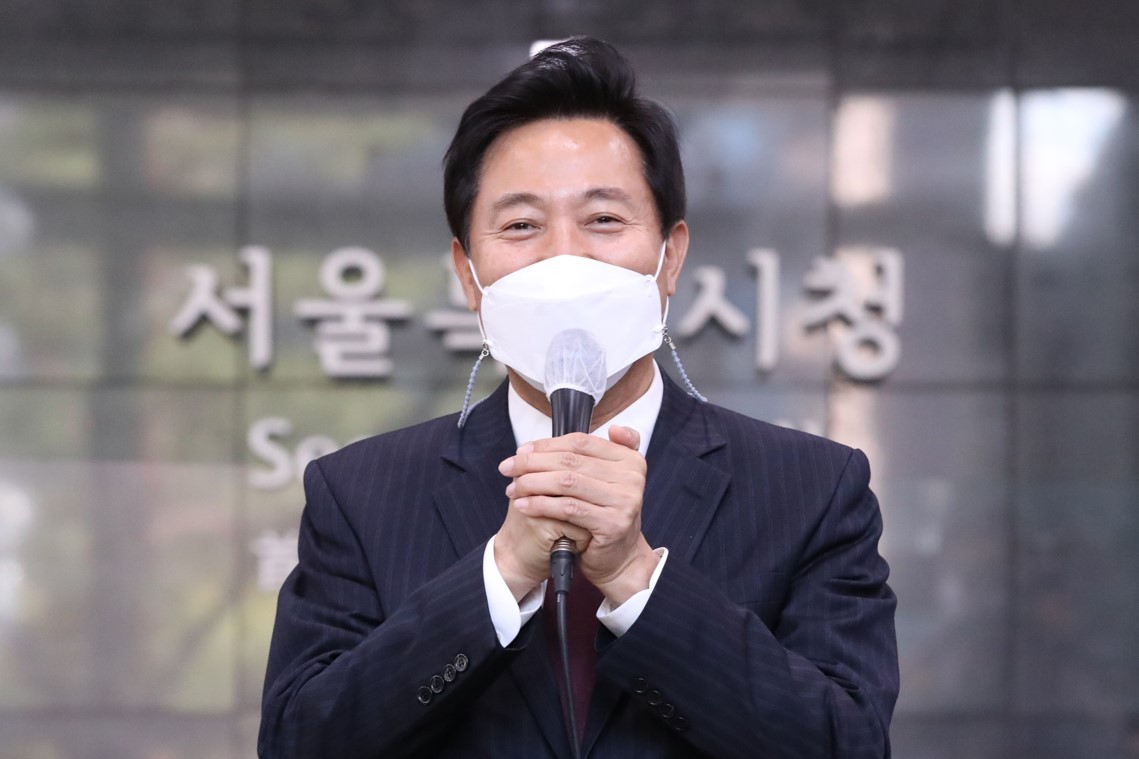 Seoul Mayor Oh Se-hoon speaks after arriving for his first day of work at Seoul City Hall on Thursday morning. (Yonhap)
Oh Se-hoon, the new mayor of Seoul, who returned to the post Thursday 10 years after stepping down, has vowed to take care of citizens suffering as a result of the prolonged pandemic and to push for deregulation to increase the supply of housing.

After arriving at Seoul City Hall on Thursday at 8:50 a.m., Oh met with reporters and expressed his feelings about his first day of work, saying that as mayor he would take care of Seoul citizens suffering the effects of the novel coronavirus outbreak.

“We will take the initiative and help people struggling with the economic difficulties from the pandemic,” Oh reiterated.

“Although (I am) elected for a year in office, I will do my best to make up for the shortcomings and change them,” he said.

This was Oh’s third election win, as he was also elected Seoul mayor in 2006 and 2010. But in 2011, he staked his position on a referendum to end free lunches for all elementary and middle school students. He stepped down when the turnout was not high enough.

Oh returned to his post triumphantly after defeating his rival from the ruling Democratic Party of Korea, Park Young-sun, 57.5 percent to 39 percent in Wednesday’s by-election.

The new mayor is expected to make significant changes to the stance of Seoul’s municipal administration and to its implementation policies.

The first change he is likely to pursue will involve lifting regulations on real estate development. During his campaign, he vowed to ease regulations on the height of apartment buildings so that more housing could be supplied. Residential buildings within 500 meters of the Han River must be no more than 35 stories high, according to a 2014 city plan.

Oh is also expected to push for the supplying of 360,000 apartment units through deregulation of reconstruction and redevelopment, as he also pledged. When asked by reporters on Thursday whether he could lift regulations on reconstruction within a week, he said, “I will try it with a will.”

Meanwhile, the overwhelming victory for the conservative party will inevitably take a toll on President Moon Jae-in.

But Wednesday’s Seoul by-election was held amid a rapid decline in approval ratings for the current administration due to surging real estate prices, a corruption scandal surrounding the state-run Korea Land and Housing Corporation and growing fatigue caused by vaccine delays.

Cheong Wa Dae is drawing a line between the results of the election and future state affairs, but a loss of power seems inevitable given that Moon has only a year left in office.

On Thursday, Moon said he takes the people’s rebuke seriously and plans to work on state affairs with a heavy sense of responsibility.

“We will focus on realizing people’s desperate needs, such as overcoming the coronavirus, economic recovery, stabilizing people’s livelihoods and eliminating corruption,” he said.

According to political watchers, Moon is expected to carry out a major reshuffle in the aftermath of the election.

Cheong Wa Dae is expected to accept Prime Minister Chung Sye-kyun’s resignation -- Chung recently expressed his desire to run for president -- and speed up the selection of a successor and deputy prime minister.

The replacement of Minister of Land Byun Chang-heum is also expected as he offered to resign last month amid a growing scandal about land speculation by public officials. The ministers of agriculture, maritime, trade and labor are also likely to be replaced.