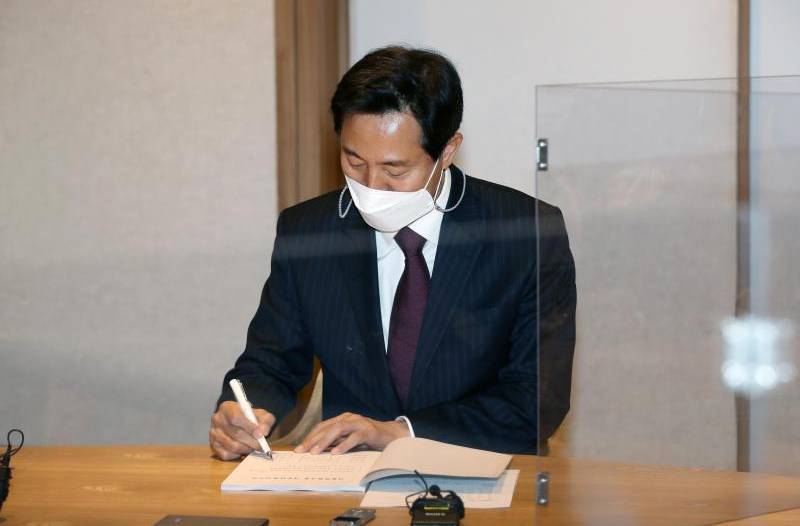 Oh Se-hoon of the main opposition People Power Party signs a document on taking office at Seoul City Hall on the first day of his tenure as Seoul mayor on Thursday. (Yonhap)
Expectations for Seoul’s grand-scale redevelopment grew Thursday after the opposition candidate won the Seoul mayoral race, partly on a pledge to lift regulations affecting high-rise apartments along the Han River and in other parts of the city.

Among the projects that Oh is forecast to resume is his grand city redevelopment plan, called the Han River Renaissance Project, which he tried to carry out during his previous mayoral term from 2006 to August 2011. The development project was aimed at transforming the city’s central districts and riverside areas, including Yongsan and Seongsu, into global business and cultural areas.

Addressing concerns over possible conflicts between the central and city governments, Minister of Economy and Finance Hong Nam-ki reaffirmed that the Moon Jae-in administration would stick to its existing plan.

“Real estate-related rules cannot be implemented by a regional government alone as they need support and approval from the state authorities,” Hong said Thursday in a meeting with other ministers and government officials to monitor the real estate market. “The directions of the government’s real estate policies should remain intact.”

Mentioning that the housing market had stabilized since the government announced its latest home supply plans Feb. 4, he emphasized that the central government would spare no efforts to proceed with the public urban restoration projects while preventing speculation and illegal property transactions.

In contrast, Oh promised to try to relax height restrictions for apartment buildings located along the river and designate around 10 areas, including Apgujeong, Seongsu, Hapjeong and Ichon, as redevelopment zones where apartments with up to 50 stories could be built.

“The former Seoul Mayor Park Won-soon caused a housing supply shortage by adopting a series of regulations,” Oh said in a media interview before the election.

Pushing for deregulation, the new mayor will try to achieve a supply of 185,000 housing units for the next five years. He has also vowed to increase the supply of residential units built by public agencies.

Capping the increase rate for the valuation of apartments and exempting owners of single homes with no income from paying property tax are also among Oh’s real estate-linked pledges.

Although the Seoul mayor has the right to relax the height rules on his own, he needs to win support from the city council or the Ministry of Land, Infrastructure and Transport if he is to carry out his other development and home supply plans.

“Since the city council is currently dominated by the DP (Democratic Party of Korea) members, Oh is hardly likely to be able to revise the existing real estate bills in some cases,” said Kwon Dae-jung, a real estate professor at Myongji University.