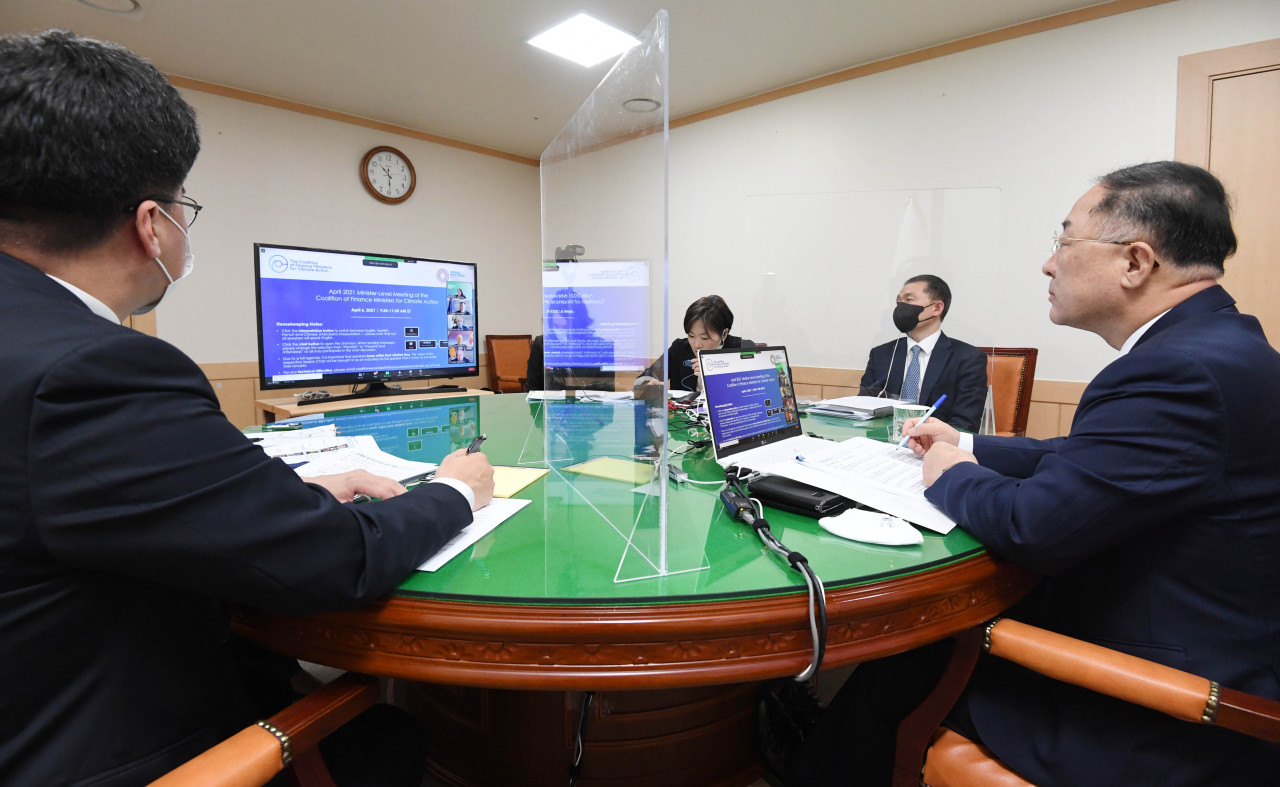 “Climate change policies, such as the carbon border adjustment mechanism, should be prevented from being abused as trade protectionism,” Hong said during a virtual meeting of the Coalition of Finance Ministers for Climate Action.

The European Commission is expected to announce a proposal for a carbon border adjustment mechanism in June, which would mean the imposition of fees on imports into the EU of certain raw materials from “less climate-ambitious countries.”

Concerns have been raised that the mechanism could spark trade conflicts between the EU and export-reliant countries such as Korea.

To enhance participation in multilateral discussions on climate change issues, including carbon pricing and climate finance policies, Korea decided to join the coalition on Tuesday. The meeting brought together fiscal and economic policymakers from over 60 countries in leading the global climate response and in securing a just transition toward low-carbon resilient development. The United States and Japan also joined the group the same day.

“Policies aimed at combating climate change exert a crucial influence on other countries. … It is important to closely cooperate with financial policymakers so that all countries can establish win-win policies that benefit all,” Hong said.

He also called for strengthening support for developing countries to make the transition to low-carbon economies, calling participation from them “essential” in mitigating environmental changes.

“We will make a joint effort to create global climate finance, including an active expansion of official development assistance, and share our experience of green transformation with other countries,” he said.

While introducing Korea’s Green New Deal, which aims to accelerate the transition toward a low-carbon and green economy, the minister stressed the importance of climate policies that could lead to economic vitalization and job creation.

In October last year, the country said it would attain carbon neutrality by 2050. As a part of efforts to achieve that goal, it plans to set up a climate response fund to help companies reduce emissions and to support vulnerable people and regions affected by environmental changes.

Although Korea is not obliged to raise climate funds under the United Nations Framework Convention on Climate Change, it is fulfilling its promise to donate $300 million to the Green Climate Fund as the host country of the organization, the ministry said.