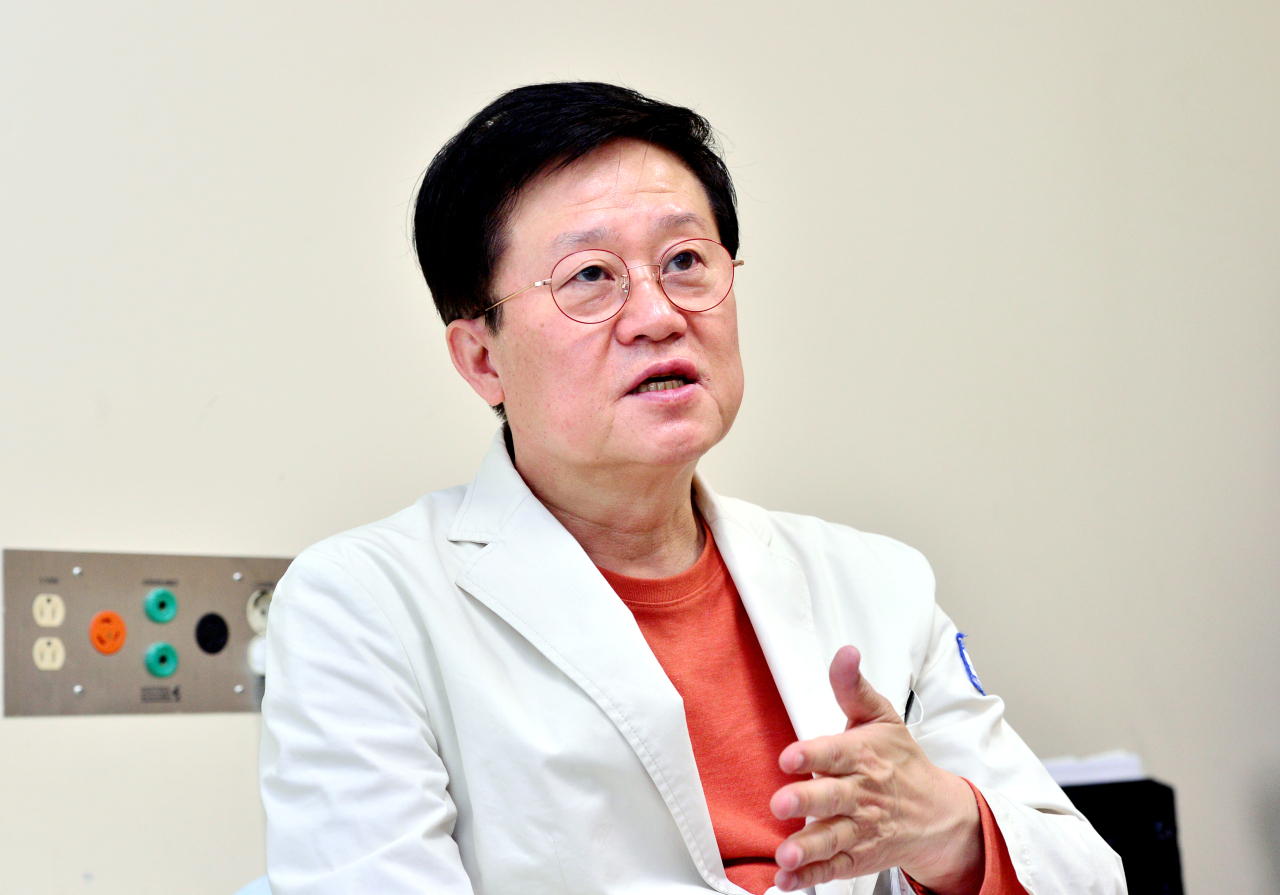 South Korea’s top hematologist says Korea must exercise due caution with AstraZeneca vaccinations until there is a better understanding of the unusual blood clot events being reported here and elsewhere among recipients.

“By caution I don’t mean vaccinations should stop, not when we don’t have other vaccines in stock. But we need to proactively monitor people receiving the vaccine and treat any suspected symptoms as though they are a blood clot case,” said Dr. Kim Dong-wook, president of the Catholic University of Korea St. Mary’s Hematology Hospital in Seoul.

Kim, who had the AstraZeneca jab himself, argued against brushing off blood clot concerns amid continued reassurance from public health authorities that so far the vaccine isn’t associated with any risks of serious side effects.

“We don’t know the true links with the vaccine, and we don’t know what the trigger is. Which is precisely why we want to be cautious,” he said, adding that it’s very hard to investigate unexpected vaccine side effects.

Although both conditions are treatable, they can be life-threatening if interventions are delayed, Kim said. The European Union agency is still looking into whether there is a connection, with another statement slated for release later this week.

Then last week, a preprint study from Germany said an uncommon combination of blood clots and low platelets observed in AstraZeneca recipients resembled heparin-induced thrombocytopenia, a rare side effect of blood thinner heparin. Researchers are trying to understand how the patients developed the condition without known exposure to heparin.

“These are not the kind of blood clots that you typically see. What is outlined in the paper, though yet to be peer-reviewed, seems to give us a cause to begin to worry,” Kim said.

Korea saw its own case of the specific blood clotting condition in the brain last month.

A previously healthy paramedic in his 20s received a first dose of the AstraZeneca vaccine on March 10 and began experiencing symptoms on March 14. He was soon hospitalized with a worsening headache, and his brain scans showed he had blood clots. He was given anticoagulation medication and other therapies before he could be discharged a week later. He has to continue treatment for the next three to six months.

Initial rounds of examinations by health authorities failed to identify heritability or other factors that may be responsible for his falling sick.

Another medical worker, also in her 20s, came down with blood clots in her lung and her leg following AstraZeneca vaccination, health authorities confirmed Wednesday. So this marks two such cases out of over 800,000 people who had at least a first dose of the same vaccine.

As the blood clots are occurring more frequently in younger people, some countries including Germany, Canada, France and Netherlands have imposed age restrictions to the vaccine’s use. But Korea is doing the opposite with its vaccine supplies that come from two companies, AstraZeneca and Pfizer. While the former is going to non-coronavirus essential workers, the latter is reserved for people aged 75 or older.

Kim although there is no evidence the blood clot risk is age-related, younger people receiving the vaccine should be informed of the possibility nonetheless. He pointed out Korea’s official information currently only lists anaphylaxis or severe allergy as potential serious adverse events following inoculations with AstraZeneca’s vaccine.

“It’s been more than two weeks since the regulators in Europe said that there might be an issue. But neither the vaccinators nor the recipients are being warned properly of the possible risks.”

While newly vaccinated people are instructed to watch out for such events for the first three days, the onset of symptoms for documented cases of the blood clotting in the brain was between four and 16 days post-vaccination, he said.

“I think we need to let people know the signs to look out for so that they are able to seek the right help at the right time,” he said. He said these signs included headaches, blurred vision, nausea, swelling in the leg or breathlessness beyond the third day after vaccination.

“Health care providers, too, should be alert for such occurrences in vaccine recipients,” he said, explaining that the unusual form of the brain-related clots was “incredibly hard” to diagnose in the first place.

Early detection is key, and not all medical facilities in the country are equipped to run tests used for diagnosis, he said.

In addition to the regular MRI and CT scans, venography, angiography and other blood tests, Kim recommends assays for platelet-activating antibodies found in patients affected with the condition as well as coagulation factors like fibrin and fibrinogen.

“Korea doesn’t have a protocol for where people can visit or be transported to in the event of any of the suspected symptoms,” he said. “Once the rollout reaches wider, younger populations, there’s bound to be a lot more confusion.”

He went on, “The idea that we would let some people stand the risks -- whose spectrum and gravity have yet to be determined -- just strikes me as something that ought to require a broader debate. Perhaps get medical ethicists involved.”

He was cautious to add, “The spirit of vaccinations is to immunize the herd and save as many lives as possible along the way. But there is too much that is still in the dark.”

“Every arising complication of special interest, even in small numbers, needs to be thoroughly investigated so that we are able to grasp the mechanisms behind it, especially if we are going to make taking the vaccine semicompulsory.”

He called on the government to work with experts in responding to side effects in people who had the vaccine.

“The government has the monopoly on all of the data, and so far has been almost reluctant in sharing it,” he said. Researchers not only have to pay but make the trip to the public agency that holds the records in order to view them for given hours at a time. But even then they wouldn’t have access to all of it, he said.

He criticized “a lack of efforts on the part of the health authorities to analyze patient data here,” who then subsequently “resort to quoting data from other countries rather than coming up with our own.”

“As a doctor I’m inclined to look at the situation from a perspective of protecting the patient first and foremost. I understand that policymakers probably have a more varied set of considerations. But the government, health care workers in the field and academia need to work together.”

Not only that, the absence of guidelines regarding AstraZeneca risks was putting doctors in difficult positions to recommend for or against getting vaccinated for people with blood disorders, who might be at a greater risk of coming down with the possibly vaccine-induced conditions, he said.

The UK advises caution in giving the AstraZeneca vaccine to people with thrombocytopenia, coagulation disorders or people on anticoagulation therapy. Korea has no such warning. Here the vaccine is to be delivered to “anyone with medical conditions” regardless of what those might be.

Kim said this approach ignores disparate risks at play. He said in the absence of alternatives, AstraZeneca vaccinations should continue in Korea, but that making exceptions might need to be considered for some patients.

“These would include, for instance, recently diagnosed blood cancer patients undergoing chemotherapy, patients with very low, or very high, blood cell count, patients with autoimmune diseases, and thrombotic patients on anticoagulants,” he said.

“In Korea, if you turn the vaccine down at your turn, you are pushed to the back of the priority list. But for patients with certain conditions we should let their doctors decide when might be the best time for them to get the vaccine.”