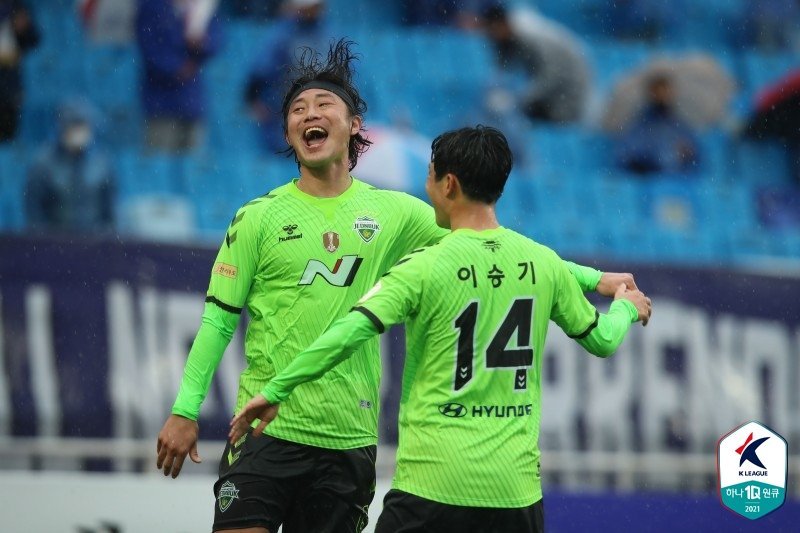 Suwon have claimed that Paik, one-time FC Barcelona prospect, had contractual obligations to sign with them after returning from Europe. But Jeonbuk have countered that the midfielder was available because Suwon had no interest in signing him in the first place.

Suwon supporters at Suwon World Cup Stadium hung banners with jabs directed at both Jeonbuk and Paik. After the victory, Jeonbuk's Instagram page returned fire, and the two clubs that previously had no particular rivalry appear to be turning into bitter foes.

As for the match itself, Jeonbuk got goals from three different players, including Stanislav Iljutcenko, who now leads the K League 1 with five goals.

With five wins and two draws, Jeonbuk sit atop the tables at 17 points. They're three up on Ulsan Hyundai FC, which beat Seongnam FC 1-0 on Saturday.

Jeonbuk and Ulsan finished first and second in each of the past two years. Jeonbuk are going for a record fifth straight title.

Also over the weekend, Jeju United suffered their first loss of the season, falling to Suwon FC 2-1.

Both clubs earned a promotion from the K League 2 this season. It was Suwon FC's first victory of 2021, and they became the first club to score more than one goal against Jeju this year. However, they're still in last place with six points from a win, three draws and three losses.

FC Seoul had their three-match winning streak snapped with a 1-0 loss to Gangwon FC on Saturday. FC Seoul are now five back of Jeonbuk in third place.

In the crowded middle class, Suwon Samsung Bluewings and Seongnam FC are tied at 11 points, with Suwon ahead in the goals scored tiebreaker. Pohang Steelers, Gangwon FC and Jeju all have eight points.

Teams will go right back at it for midweek action, with two matches set for Tuesday and four more Wednesday, followed by three matches apiece on Saturday and Sunday. (Yonhap)