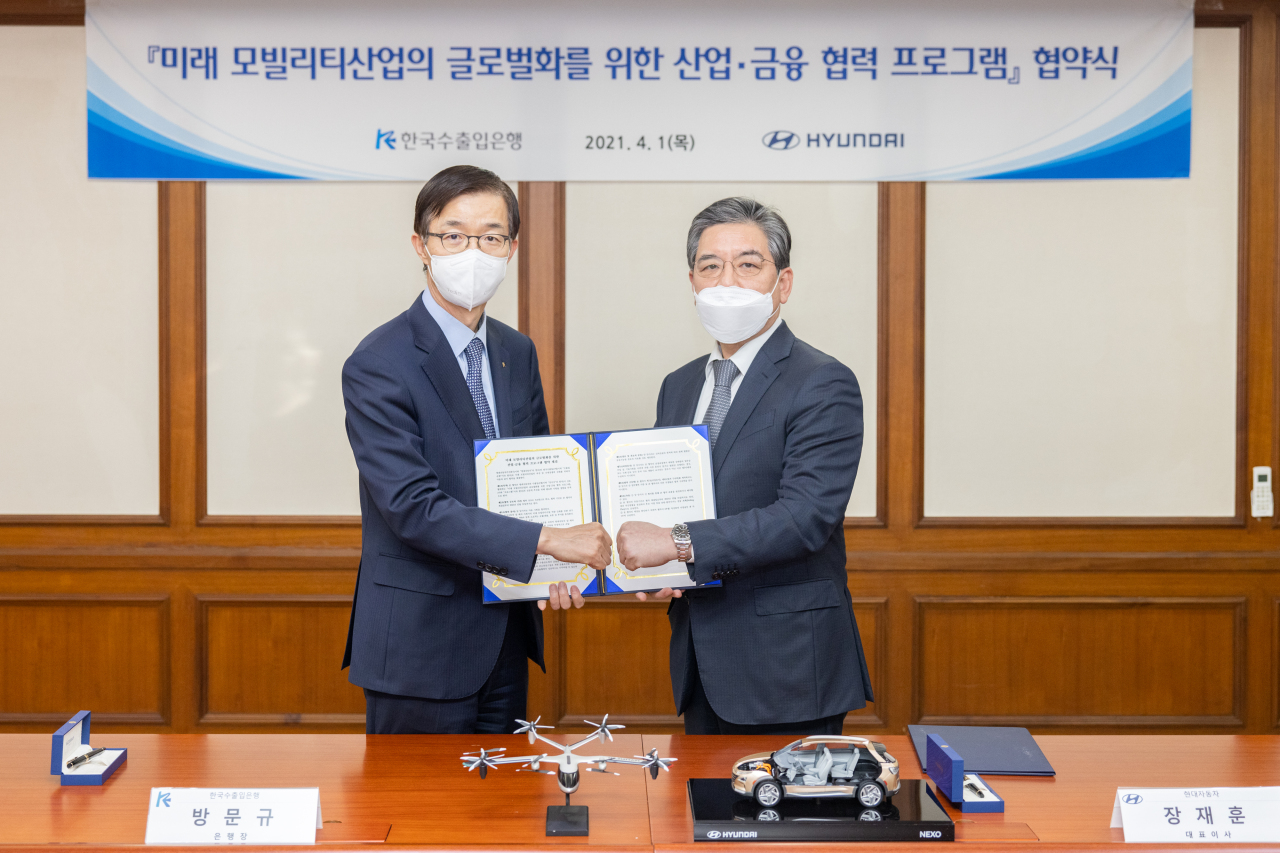 Bang Moon-kyu, chairman and president of the Export-Import Bank of Korea (left) and Hyundai Motor CEO Chang Jae-hoon, at the bank’s headquarters in Yeouido, western Seoul, on Thursday. (Exim Bank)
The Export-Import Bank of Korea has signed an agreement with Hyundai Motor to provide financial support to the automaker vying with global rivals to take the lead in future vehicle markets.

Under the memorandum of understanding inked on Thursday, the state-run policy lender will offer the automaker some 3 trillion won ($2.65 billion) until 2023 for its projects involving its plan to make the transition to become a smart mobility solution provider that manufactures zero-emission and driverless vehicles.

The fund will be funneled to research and development, facility investments both domestic and overseas, as well as merger and acquisition deals aimed at helping the world‘s fifth-largest automotive group and its suppliers reach an advantageous position in the future mobility market.

“The Exim bank will play a role in helping Hyundai Motor win the future mobility market with the financial support program as the winner of the market has not yet been decided,” Export-Import Bank of Korea President Bang Moon-kyu said.

The investment came as global corporations are entering a race to develop more eco-friendly and intelligent vehicles. Jumping into the bandwagon are not only carmakers like Volkswagen and Toyota, but also IT giant Google and plane maker Boeing, who have made massive investments into autonomous driving technology and urban air mobility.

Last December, Hyundai pledged to make an investment worth 23.5 trillion won into its hydrogen business, electrification and self-driving technologies.
The future mobility sector is one of the lender’s seven key areas that it will make a total of 80 trillion won worth of investments by 2030. Other areas include green energies such as hydrogen, solar and wind as well as 5G, healthcare and digital content.

In national roadmaps unveiled in late 2019, the government envisioned that the country would significantly increase the number of electric and hydrogen fuel-cell electric vehicles on the road and develop self-driving aircrafts.