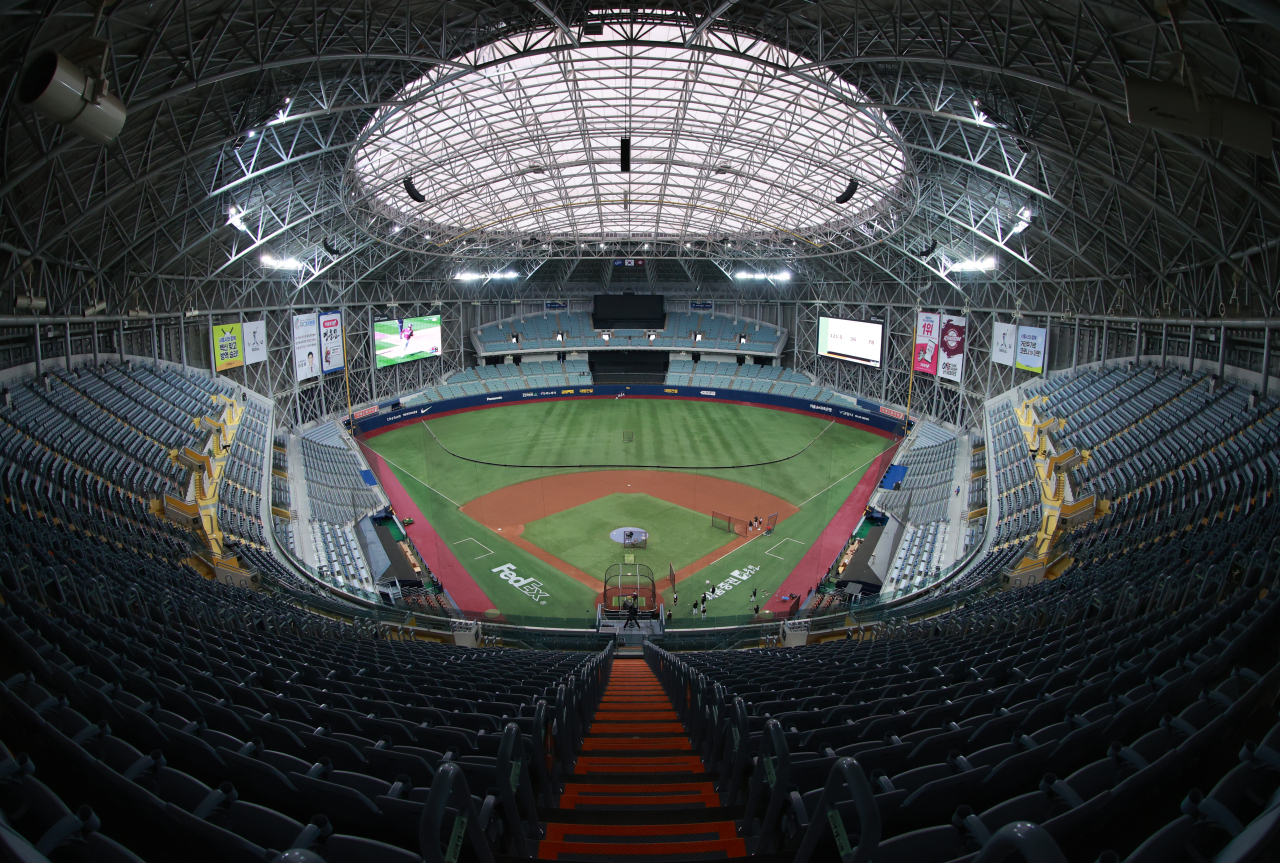 Gocheok Sky Dome (Yonhap)
Samsung Lions' skipper Huh Sam-young is managing his second Opening Day in the Korea Baseball Organization (KBO) on Saturday, but it feels like the first one to him.

In 2020, the coronavirus pandemic caused multiple delays to the start of the season. It had been scheduled to start on March 28, and the league eventually decided on May 5. By the time that first day rolled around, it was too anticlimactic for Huh.

This year, things are at least starting on time. Four of the five games scheduled were rained out, but with the Lions visiting the Kiwoom Heroes at Gocheok Sky Dome in Seoul, the only domed venue in the KBO, Mother Nature won't disrupt the proceedings.

"Last year, it didn't even feel like Opening Day," Huh said in his pregame media conference. "This is the first real Opening Day for me. It's pretty exciting."

But it's not all hopeful and rosy for the Lions in the early going, as they have lost several key players to injuries already -- none bigger than first baseman Oh Jae-il, the team's top free agent acquisition in the offseason. The slugger will be out until at least May with an oblique injury, and his backup, Lee Sung-gyu, has been ruled out for four months with an ankle injury. Left-hander Choi Chae-heung has also suffered an oblique injury and will be gone for two months.

Asked about the team's injury situation, Huh sighed and said, "It just breaks my heart."

"We have a completely different team if Oh Jae-il is in the middle of the lineup," the manager said of the 20-homer threat coming off a .312/.390/.482 season. "Hopefully these injuries will give other players an opportunity to step up. And once we get all the players back, we'll be that much stronger."

Huh's counterpart for the Heroes, Hong Won-ki, has his own injury issues. Hong's closer, Cho Sang-woo, is expected to be out until mid-May with an ankle injury, and two other relievers, Han Hyun-hee and Lee Young-jun, are also sidelined.

Infielder Kim Woong-bin and outfielder Park Jun-tae will begin the season in the minors, though they aren't dealing with serious injuries.

"Woong-bin will need to play with more confidence in himself, and we want to give him some time in the minor league to develop that confidence," Hong said. "Jun-tae has some nicks that he picked up during spring training. We're in for a long haul, and so we want him to be 100 percent ready."

Hong will be managing for the first time this season, after spending more than a decade with the Heroes as a coach and a scout. He said this year's Opening Day doesn't feel that much different compared to the previous ones he experienced as a coach.

"There's always a mix of nerves and excitement on the first day of the season," Hong said. "It's the same this year, except that I am worried about having so many players injured. I am looking forward to seeing new guys take charge." (Yonhap)