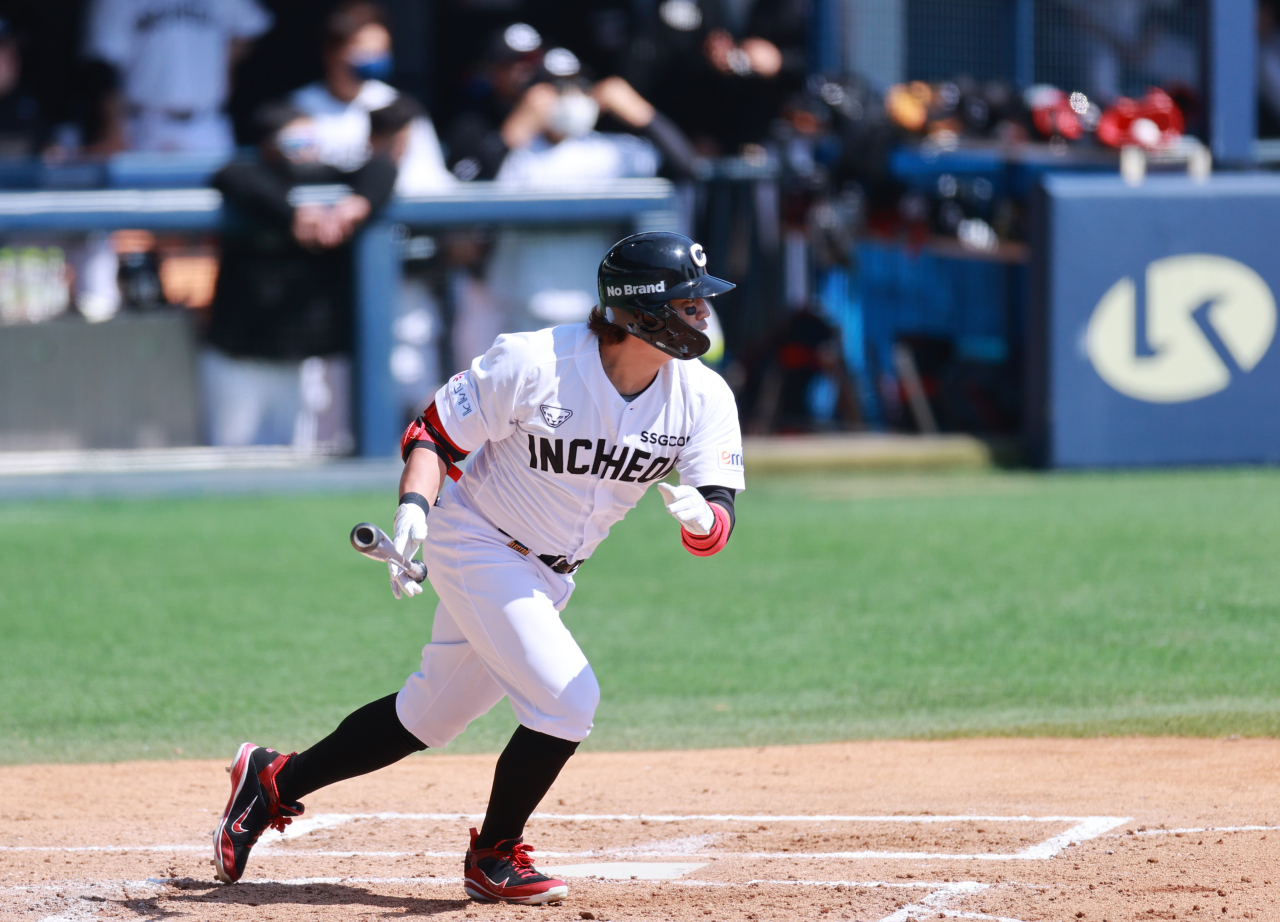 Choo Shin-soo of the SSG Landers hits a single against the LG Twins in the top of the seventh inning of a Korea Baseball Organization preseason game at Jamsil Baseball Stadium in Seoul on March 30, 2021. (Yonhap)
To a man, South Korean baseball players who had previously only seen Choo Shin-soo in action in the majors say they're honored to now be in the same league with the veteran.

Following 16 years in the bigs, Choo signed with the SSG Landers of the Korea Baseball Organization (KBO) in February. Before the ink on his one-year, 2.7 billion won ($2.4 million) contract was dry, Choo became the face of his new team and the most compelling name to watch this season.

In the virtual preseason media day -- taped on Monday and aired Friday -- several opposing pitchers said as much as they admire Choo, they won't be in awe of him on the mound.

"It's going to be a stressful situation, but in baseball, pitchers will get the better of hitters more often than not," said KT Wiz right-hander So Hyeong-jun, the reigning Rookie of the Year. "I'm going to pitch with confidence, believing that I can get him out."

And will So pump his fist if he strikes out Choo?

"I'll act like I've done it before," So said with a smile.

Kiwoom Heroes' 18-year-old rookie pitcher Jang Jae-young, expected to be one of the league's hardest throwers this year, said Choo is the one opposing player that he was most looking forward to seeing.

"It doesn't have to be a strikeout. I just want to get him out," Jang added.

Kia Tigers' reliever Park Jun-pyo said he was thrilled to have a chance to test himself against the 2018 American League All-Star.

"He's such a great hitter, and I want to go after him," Jang said. "Even if he gets a hit off me, I'll make my pitches and make sure I don't walk him."

Two Samsung Lions' pitchers, Won Tae-in and Yang Chang-seop, decided to have some fun with it. Won previously said he'll throw three straight fastballs on the inside against Choo, and that was by design.

"Now he'll be thinking about my fastball, and I am going to get him with a changeup," Won said.

Yang also announced his plan of attack against Choo.

"I am just going to throw four pitches in the dirt and face the next guy," Yang said.

Choo himself said he was "flattered" that his opponents think so highly of him. He also said he was confident he and the rest of the Landers can take the KBO by storm this year. In their previous incarnation as the SK Wyverns last year, the team stumbled to a ninth place finish -- only two years after winning the Korean Series.

"I made a difficult decision to come over here, and I'll try to live up to fans' expectations," Choo said. "While I was playing in America, I know it was difficult for fans to watch me play live because of the time difference. Now that I am in Korea, I'll put on a good show for them."

Choo is one of the most accomplished Asian players in major league history. He leads all Asian hitters with 218 home runs and 782 RBIs.