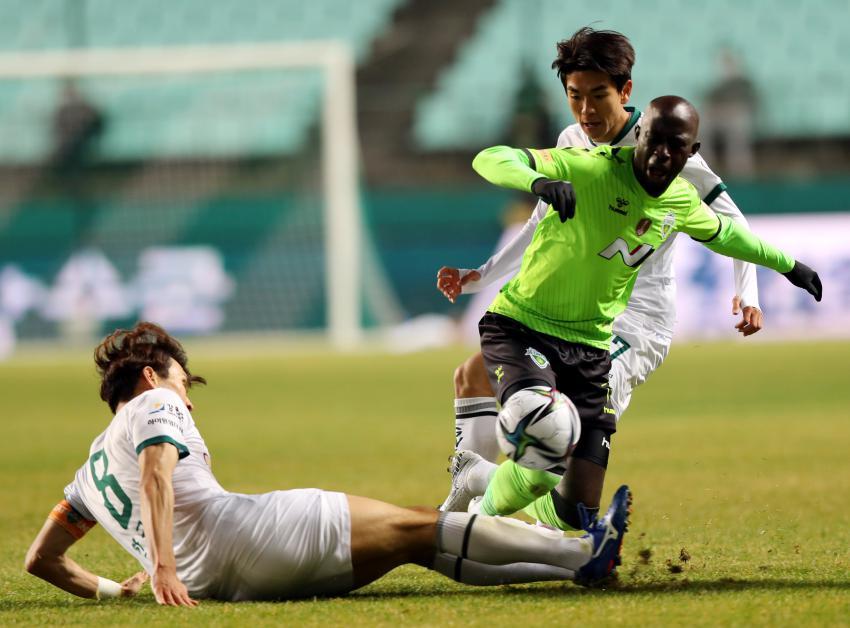 In this file photo from March 9, 2021, Mo Barrow of Jeonbuk Hyundai Motors (R) is tackled by Han Kook-young of Gangwon FC (L) during a K League 1 match at Jeonju World Cup Stadium in Jeonju, 240 kilometers south of Seoul. (Yonhap)
Two rival clubs at odds over a disputed player acquisition will square off in the K League 1 as the season resumes over the weekend following a brief international break.

Jeonbuk Hyundai Motors, currently in first place with 14 points, will visit Suwon Samsung Bluewings, in fourth with 11 points, at 2 p.m. Saturday. The kickoff is at Suwon World Cup Stadium in Suwon, 45 kilometers south of Seoul.

It's a matchup between the league's most productive offense (Jeonbuk) and its stingiest defense (Suwon). Suwon could potentially overtake the top spot with a victory. And as if the showdown needed any more juice, the two teams are caught up in a controversy surrounding Jeonbuk's signing of one-time FC Barcelona prospect Paik Seung-ho on Tuesday.

Jeonbuk first began negotiations with Paik to pluck him from the second-tier German club Darmstadt 98 in February. Suwon then informed Jeonbuk that Paik, a former Suwon youth player, already had a deal in place to join Suwon if he wanted to come home from Europe. Jeonbuk halted talks with Paik later in February.

Paik left for Suwon's feeder club to join FC Barcelona's youth team in 2010. Suwon offered Paik financial backing, on the condition that the player would sign with them once his time in Europe was up. Suwon are now claiming that Paik has reneged on that agreement.

As Suwon and Paik were unable to reach a resolution, Jeonbuk reopened their negotiations with the player and signed him one day before the first-half transfer window closed.

Jeonbuk explained they didn't want to leave the 24-year-old midfielder in limbo, and they also concluded Suwon weren't going to sign Paik anyway.

Suwon responded that they found Paik's decision "regrettable" and threatened to take legal action against him as they'd planned all along.

Jeonbuk tried to stay above the fray, saying it was up to Suwon and Paik to handle any remaining legal issues.

Paik isn't expected to be ready for Saturday's match.

Pohang Steelers and Daegu FC will kick things off at 7 p.m. Friday. After the Suwon-Jeonbuk tilt Saturday, Seongnam FC will host Ulsan Hyundai FC at 4:30 p.m., followed by FC Seoul vs. Gangwon FC at 7 p.m.

FC Seoul are in second place with 12 points, one ahead of Ulsan, Suwon Samsung Bluewings and Seongnam. The top of the tables may look quite different by the end of Saturday.

FC Seoul captain Ki Sung-yueng will try to extend his goal scoring streak to four matches. FC Seoul have won all three matches in which the midfielder has scored.

Jeju United are one of two undefeated clubs remaining this year, with one win and five draws. Jeonbuk have four wins and two draws so far. Suwoon FC, on the flip side, are the only club without a victory in 2021, as they're stuck at three draws and three losses. (Yonhap)