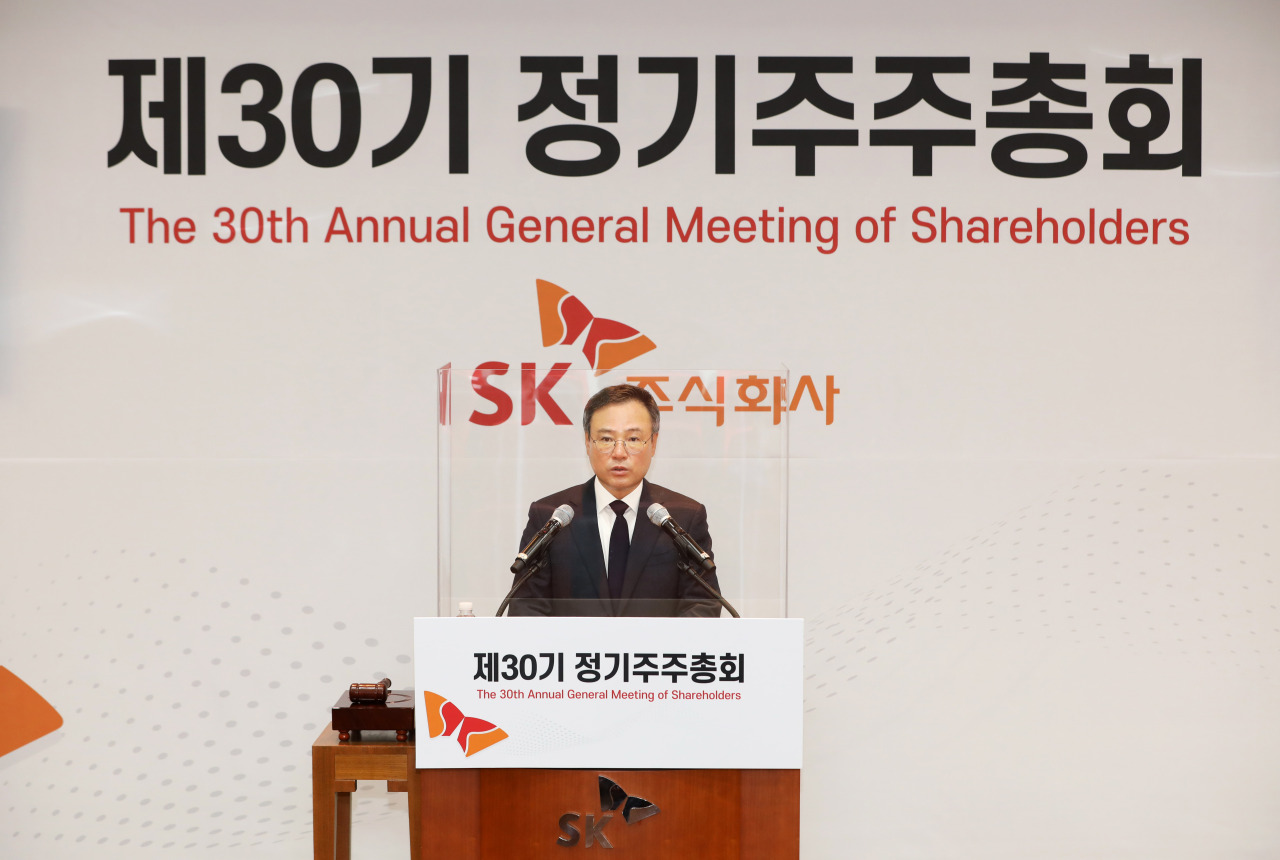 SK Holdings, the holding firm of SK Group, South Korea’s third-largest conglomerate in assets, said Monday that it has changed its name to SK Inc. and vowed to accelerate its sustainable investments in strategic sectors.

It also established an exclusive committee dedicated to ESG -- environmental, social and governance issues -- and added a first-ever female member to its board of directors, all in line with the growing calls for nonfinancial consideration in management.

“Despite the pandemic shock last year, SK Holdings has yielded good investment results on the back of the successful IPO of SK Biopharm and the block deal (to sell the shares) of e-Shang Redwood Group,” said CEO Jang Dong-hyun at the company’s annual shareholders’ meeting at its headquarters in central Seoul.

“This year, we shall mark our new start as professional value investor, aiming to inject some 140 trillion won ($123.6 billion) into advanced material, green, bio, digital sectors.”

The CEO’s unveiling of the “SK Financial Story” came during the talk with investors, which was released via the company’s webpage and YouTube channel, on the sidelines of the regular shareholders’ meeting.

This year, the company’s key goal will be to reshuffle its business structure so as to prioritize the so-called Big Four business sectors, according to the CEO.

Its road map includes the plan to achieve 4.3 trillion won in earnings before interest, tax, depreciation and amortization by 2025 in battery and semiconductor sectors, on the back of expanded cross-sector partnership and merger and acquisitions.

In the up-and-coming bio business, the company hopes to achieve 1.2 trillion won in EBITDA during the same period, pinning hope on the launch of epilepsy treatment Xcopri in the US market and improved valuation of its equity stake in SK Biopharm.

Shareholders also approved the appointment of Maeil Dairies CEO Kim Seon-hee as a nonexecutive director, marking the first case of a female member in the board since SK Holdings kicked off in 2015.

The move came in line with the mounting calls here to advance gender equality and diversity in the C-Suite, as well as the ESG management trend.

In terms of environmental factors, SK Inc. hopes to reduce some 65 percent of the group’s total carbon emission over the next 10 years, by expanding investments in eco-friendly technologies such as battery, hydrogen and eco solutions.

The company also is working on establishing an eco-friendly hydrogen ecosystem that may handle some 280,000 tons of hydrogen energy by 2025.

In the social perspective, the company is targeting bringing the female executive ratio to 25 percent by 2025 and also introducing an autonomous working system which allows employees to decide their working hours and venues according to their lifestyle needs.

To enhance governance, the board of directors will be given a wider range of authorities in strategies, personnel affairs, and business assessment.

“The SK Financial Story is the innovation road map of SK Inc., as well as its promise to move towards new values in the upcoming future,” said CEO Jang, vowing to achieve 140 trillion won in market capitalization by 2025 on the back of portfolio adjustment.