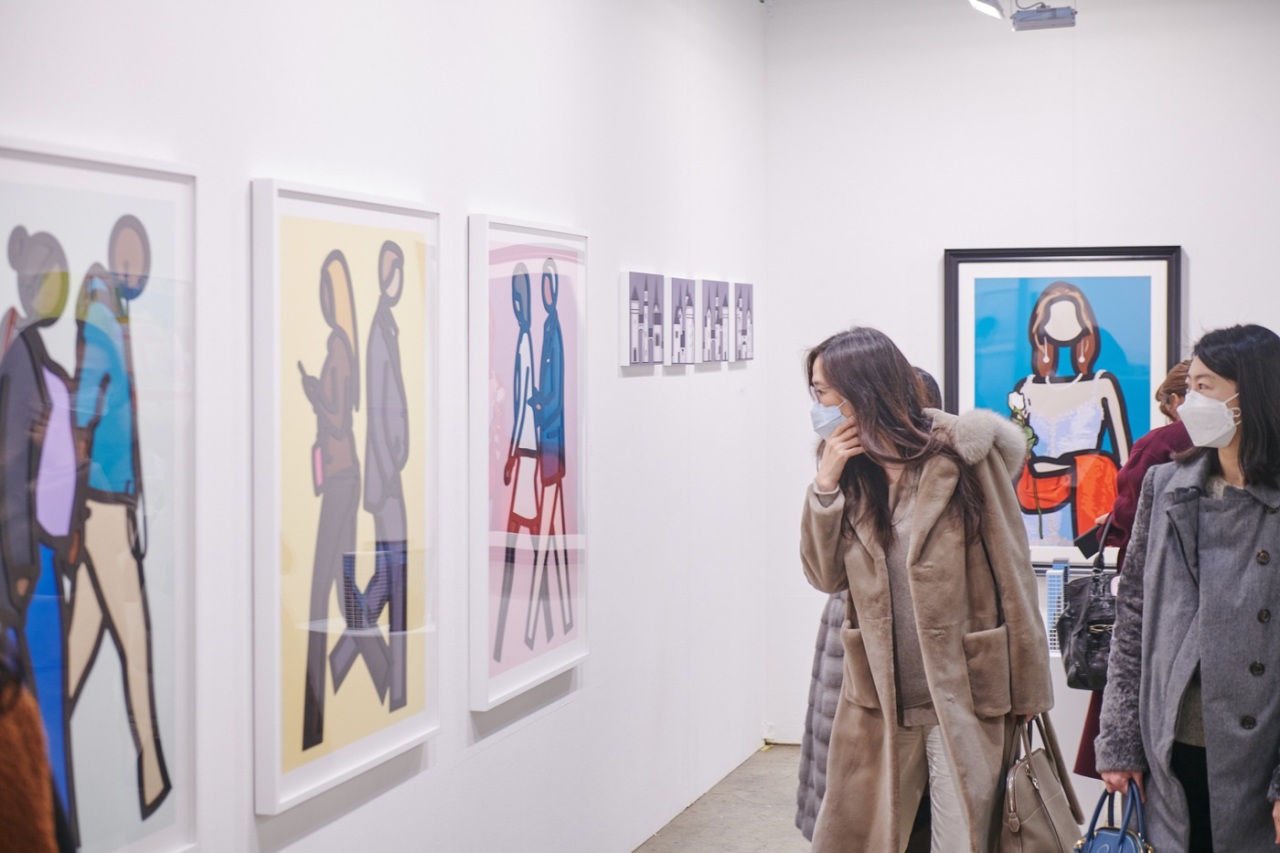 Appreciating art at galleries and exhibitions is a pure joy for Jeong Hye-young, a 35-year-old office worker in Seoul, not just because it takes her mind off her stress-filled work life but also because she sees how the works increase in value.

“I don’t think art is only for the rich. After starting to buy paintings, I feel like I know more about the artists and truly enjoy the artworks,” said Jeong, who collects paintings by contemporary artists including Oh Chi-gyun, best known for his hand-painted “fingerworks.”

“Price values of paintings increasing is also an appealing factor of collecting arts that it can be considered as an investment, not just as a subject of appreciation,” said Jeong.

Jeong is among a growing number of people, especially those in their 20s and 30s, investing in art.

At an auction held March 23, local auctioneer Seoul Auction sold 95 percent of the 146 paintings, prints and sculptures it offered. Combined, they went for 10.4 billion won ($9.2 million).

“Many bidders participating in the auction were those in their 20s and 30s,” the auction company said, declining to give numbers, citing protection of personal information.

The growing interest in art investment is part of a new golden era for the South Korean art market, which went through a long period of depression after its previous heyday between 2005 and 2007.

Art pieces by Korean masters, including the late Kim Tschang-yeul, are hitting new highs in value in light of exploding demand, according to a recent report by art appraisal firm the Korea Art Authentication & Appraisal Research Center.

Across major markets in Asia, art investment is gaining ground as a result of ultralow interest rates and high liquidity.

A report released by investment bank UBS early in March showed that art broker Sotheby’s reported strong sales in Asia in 2020, with auction sales reaching $932 million. Compared with people from other age groups, millennials were more willing to purchase at higher prices online.

Of the 2,569 rich collectors around the world surveyed for the report, 56 percent belonged to “Generation MZ,” comprising people born from the early 1980s to the early 2000s. They spent an average of $228,000 to purchase artworks, and 30 percent spent more than $1 million.

The rising popularity of art investment can be attributed to online platforms that facilitate online auctions and new types of art investment such as co-sharing, or investing in fractional shares, according to market watchers. But investors are drawn to art, rather than stocks or cryptocurrency, because it raises hopes of stable financial returns.

“Investing in real estate requires a lump sum of money while cryptocurrency is highly risky,” said Song Ja-ho, CEO of art co-sharing platform operator Pica Project. “Those young collectors seem to think art is something special as they can own and enjoy while they can get some financial gain from it,” he added.

People find merit in art investment in Korea because it is somewhat free from taxation. Purchases of artwork for 60 million won or less are exempt from tax. For artworks priced over 60 million, a 20 percent tax is imposed only on 10 percent of the sales price. Transactions involving works by living artists do not incur any tax. 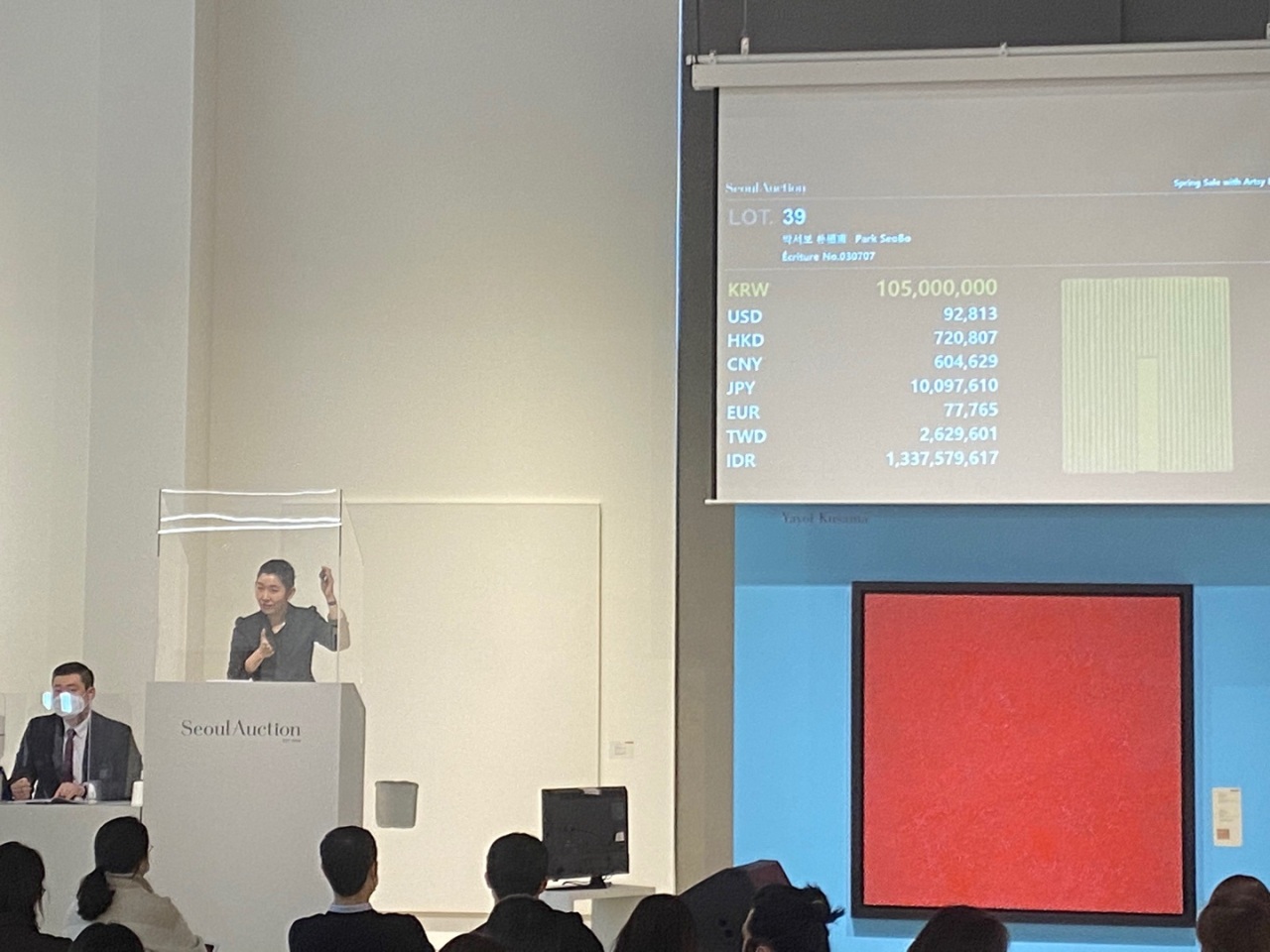 Thanks to the Pica Project platform, people can jointly own an expensive masterpiece for as little as 10,000 won. After being displayed at a gallery run by the firm for a while, the artwork is later sold at a premium, and the proceeds are distributed among the investors proportionally.

Young art collectors also venture to invest in nonfungible tokens -- digital assets that can contain drawings, animated GIFs and songs. NFTs have been sweeping the conventional art industry as well as cryptocurrency markets, and some tokenized paintings have sold for millions of dollars. “Missing and Found,” an NFT-based digital artwork featuring a big-eyed girl with heavy makeup created by Korean artist Mari Kim, was sold for 607 million won at a Pica Project auction this month. The digital image, whose starting price was 50 million won, was paid for in Ethereum, a type of cryptocurrency as well known as Bitcoin. It is speculated that the buyer is a young tech-savvy art investor.

Although the increasing interest in art is good for the industry, some market watchers say novice art collectors should first try to develop an eye for great pieces via extensive research and observation of news and trends.

“Fledgling buyers should think twice before they make decisions to collect art pieces, and they should not be easily swayed by others’ opinions when picking an art piece,” said Yoon Bo-hyung, a lawyer and author of an art collecting guidebook titled “I choose artworks over Chanel bags.”

“If you are not so sure about whether to buy a certain art piece or not, then do more research and find something which makes you feel ‘this is it … this is mine,’” she added.