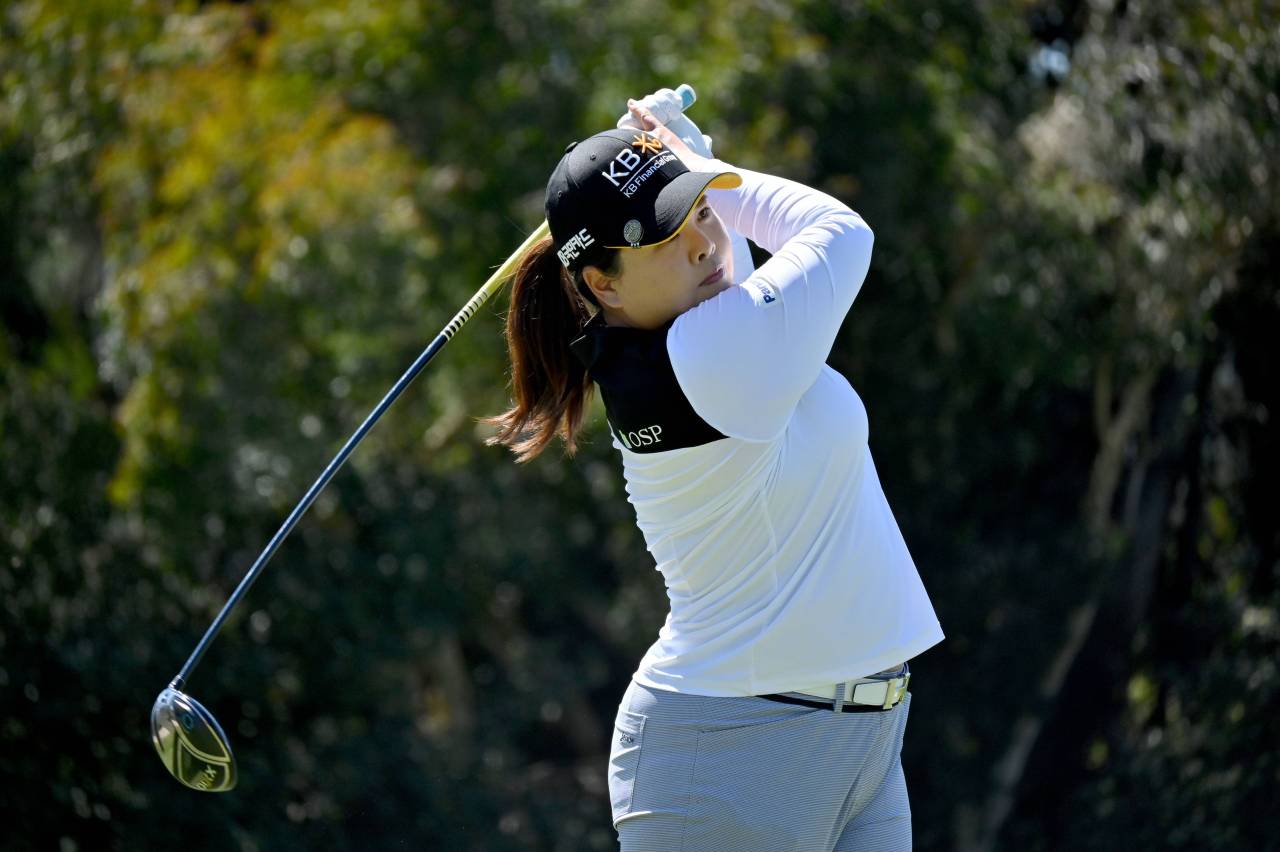 Park In-bee of South Korea tees off the 2nd hole during the Final Round of the KIA Classic at the Aviara Golf Club on Sudnay, in Carlsbad, California. (AFP-Yonhap)
Park In-bee has added another line to her LPGA Hall of Fame resume.

The South Korean veteran collected her first victory of the

2021 season at the Kia Classic in Carlsbad, California, on Sunday (local time). It was also Park's 21st career title.

Park had finished second at the tournament three times -- in 2010, 2016 and 2019 -- before finally breaking through with a comfortable, five-stroke win over two Americans, Amy Olson and Lexi Thompson. Park shot a two-under 70 in the final round to finish at 14-under 274 to win her 2021 season debut.

Park carried a five-shot lead over fellow Korean Hur Mi-jung at 12-under into the final round at the par-72 Aviara Golf Club and was never seriously threatened over her final 18 holes.

Park opened her day with six straight pars, and her first birdie of the day at the seventh kept her in front of the field by five strokes.

Lexi Thompson had three birdies on the front nine to get to within four of Park at the turn, though Park picked up her own birdie at the ninth hole to regain her five-shot lead.

Another birdie by Park at the 10th took her to 15-under, six ahead of Thompson. From there, it was a race to see who would finish in second place.

The runners-up ended up being Olson and Thompson, who shot a 68 and a 69, respectively.

Park had just two bogeys over her first 65 holes at Aviara, and committed back-to-back bogeys at the 12th and 13th, though she was still up by five shots standing on the 14th tee.

Park made up for those bogeys with an eagle at the par-four 16th, where she drove the green and drained a long putt to get back to 15-under. She closed out with an inconsequential bogey at the 18th.

"It was a great week this week. It was my first week back out in three months or so, and I played so good," Park said afterward. "I couldn't believe how (well) I was doing out there this week. I thought this week was just kind of a preparation for next week, but I exceeded so much more."

Despite knowing she had a comfortable lead throughout the day, Park said she felt some pressure during the round, which led to those consecutive bogeys.

"The eagle at the 16th is obviously a great eagle that really had a big relief for me," Park added.

Park will take her winning form into the season's first major scheduled for this week, ANA Inspiration, in Rancho Mirage, California. She is the 2013 champion of that tournament.

This victory also keeps Park on track to qualify for the Tokyo Olympics as the defending gold medalist.

Olympic berths will be determined by the world rankings at the end of June. The top-15 players will qualify, with a limit of four golfers per country.

South Korea currently boasts six players in the top 15, and Park, at No. 4, is the third highest in that group, behind No. 1 Ko Jin-young and No. 2 Kim Sei-young. Kim Hyo-joo is holding down the final spot at No. 8, with Park Sung-hyun lurking at No. 11 and Lee Jeong-eun further back at No. 13.

Park has opened up enough of a gap between herself and the three trailers, and the latest win will extend her lead.

Park is the first South Korean champion of the 2021 season. The three previous tournaments had all been won by American players.

In the 2020 season cut short by the coronavirus pandemic, South Korean golfers combined to win seven of 18 tournaments, including three of the four majors. (Yonhap)