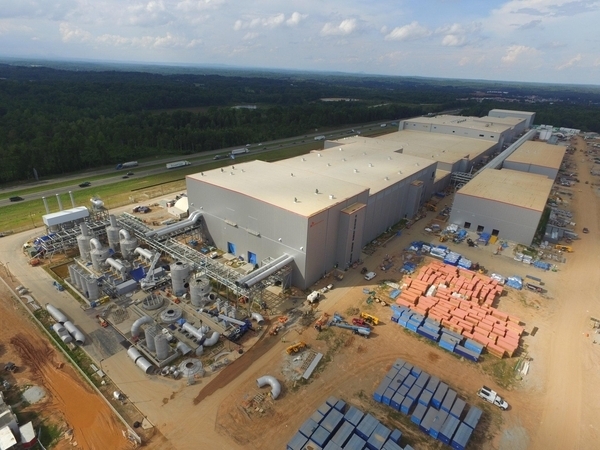 SK Innovation's plant site in Georgia (SK Innovation)
Calling the punishment by the United States’ trade watchdog “catastrophic and a harm to public interest,” South Korean battery maker SK Innovation said it was considering all options, including abandonment of its $2.7 billion manufacturing facilities in the US state of Georgia.

In its latest appeal to the US International Trade Commission, SK Innovation alluded to halting the ongoing construction of its second battery manufacturing plant in Commerce City, Georgia, as well as abandoning the whole battery production, including energy storage systems, in the US, should the organization not reconsider the 10-year business ban it imposed on it. The USITC made the decision in February, saying SK had misappropriated 22 trade secrets from its crosstown rival LG Chem.

“The commission’s orders destroy the economic viability of SK’s investment in battery production in Georgia and will rationally and inevitably lead to its abandonment, and will also cause the loss of the thousands of domestic jobs and environmental benefits that the project would have brought,” the company said in the request document that was revealed to the public Wednesday.

It is the strongest message so far to come from SK regarding the future of its US business. SK last year completed construction of the first electric vehicle battery plant in Georgia, and it is currently building a second plant there, slated for completion in 2023. Combined, the two would have a combined production capacity of 20 gigawatt-hours a year, enough for 250,000 electric vehicles. It would create 2,600 jobs in the US.

The first plant was set to begin operation next year.

“The company is considering all options including ditching the Georgia plant, if the matter is not resolved,” a company spokesman said.

In its formal objection of the ITC decision, SK also said: “The two- and four-year carve-outs in the remedial orders, limited to the Volkswagen MEB and Ford F-150 EV projects, do not allow SK to recover any significant fraction of its capital investment, and thus do not change its calculus to terminate construction of the Georgia plant.”

The ITC, while slapping the firm with a 10-year business ban, has allowed a grace period of up to four years for it to continue supplying Volkswagen and Ford.

SK also claimed in the document that there are legal questions and severe errors made by the ITC.

SK argued that the ITC orders could affect its energy storage systems business in the country.

“The commission’s order also reaches SK’s batteries for ESS products. … Because of the commission’s failure to require LG to precisely define the purported trade secrets at issue, or make clear that the order is limited to batteries for EVs this entire green energy segment will be closed to SK, to the detriment of SK, American consumers, and our planet.”

SK is in an all-out lobbying campaign to win President Joe Biden’s veto of the ITC ruling.

CEO Kim Jun and board chair Kim Jong-hoon, who was the former trade minister during the Roh Moon-hyun and Lee Myung-bak governments, are currently in the states to hold talks with influential figures in political and economic circles in a bid to win a presidential veto.

SK has even scouted former US Attorney General Sally Yates who worked for the Trump administration. Yates said Wednesday that Biden should reject the ITC’s final ruling for the sake of the Georgia plant.

The presidential veto should be made by April 11. In case of no veto, SK plans to file an appeal with the US Supreme Court of Appeals for the Federal Circuit.

During SK’s shareholders meeting on Friday, a senior official explained about CEO Kim’s plans in the US.

“Kim is visiting Georgia and Washington and speaking with local government officials to salvage the Georgia battery plant. Also, Kim is drawing up plans for the worst-case scenario, even considering taking out equipment inside the Georgia plant and relocating them to the company’s battery factories in Hungary or China,” he said.

Up until last week, there was no sign of settlement between SK and LG on the battery dispute.

While LG again confirmed Thursday its vow to fight for a reasonable amount of compensation from SK – which is rumored to reach 3 trillion won ($2.66 billion) – SK said on Friday it would not accept LG’s demand as it would seriously undermine the competitiveness of its battery business.