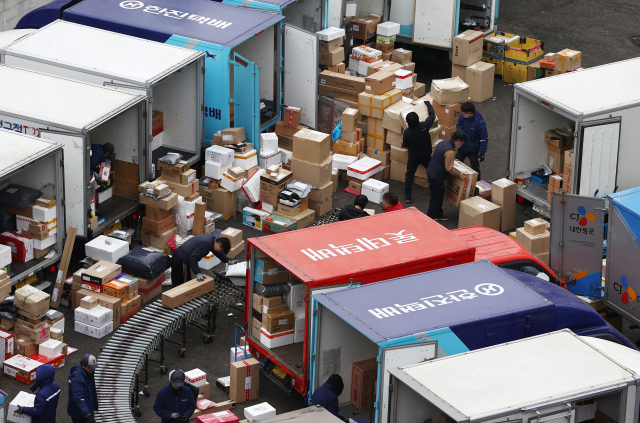 Workers sort goods at a parcel distribution center in Seoul. (Yonhap)
The South Korean government and National Assembly are looking to ease regulations on employing foreign nationals and for immigration in the face of labor shortages brought on by the prolonged pandemic.

On Friday, a bill to revise the act on the employment of foreign workers, which was proposed by Rep. Lee Jong-bae of the main opposition People Power Party, passed the plenary session of the National Assembly.

The main focus of the bill is to increase the number of industries that can hire foreign workers and to extend the period of employment for foreign workers, for whom it has been difficult to enter and leave the country due to the pandemic.

Rep. Lee said, “Some industries in Korea are suffering from manpower shortages due to the decrease in the number of employable people. They have no choice but to rely on foreign workers.”

“In particular, due to the pandemic, foreign workers cannot leave the country even after the expiration of their employment period, and they are restricted from entering the country even if they wish to reenter the country,” he added.

Also, the bill allows the employment period of foreign workers to be extended by an additional year if it is deemed difficult for foreign workers to enter and leave a country due to the spread of infectious diseases and natural disasters.

The Ministry of Justice also recently announced a legislative amendment to the enforcement decree of the immigration control act, which aims to expand the scope of industries that allow foreign workers.

Under the current immigration law, H-2 visa holders can gain employment across 39 industries, including manufacturing, livestock and fisheries with fewer than 300 employees.

When the enforcement ordinance changes under the revision, foreign workers will be allowed to work in jobs such as package sorter, the wholesale of fruit, vegetables and spices, meat transportation and mining.

The ministry said the move was to relieve labor shortages at some industrial sites.

The Korea Integrate Logistics Association has welcomed the move, saying, “Until now, the package sorting sites have been suffering from a shortage of around 7,000 manpower annually.”

The prolonged pandemic has also led to labor shortages for farms.

Last year, farm owners struggled during harvest season as the spread of COVID-19 prevented foreign seasonal workers from entering the country. Things have not changed this year.

Farm owners applied for support of more than 4,500 manpower nationwide this year, but this does not seem likely to be fulfilled as the pandemic continues.

In North Gyeongsang Province, the regional government is requesting permission from the Ministry of Justice to allow H-3, E-9, F-1 and F-3 visa holders to work in rural areas.

The province requires around 230,000 people during the spring farming season in April-June and October-November, when manpower shortages are most severe.

Considering the situation in rural areas, the Ministry of Justice introduced this month a temporary seasonal labor system for one year, until March next year.

It allows F-1 and E-9 visa holders to work as seasonal workers in rural areas even if their stay period is over. Through this program, 82 people applied for jobs in North Chungcheong Province early this month.

The provincial government expects that if foreigners whose stay periods expire apply as seasonal workers, the worst of the labor shortage in rural areas like last year will be avoided.