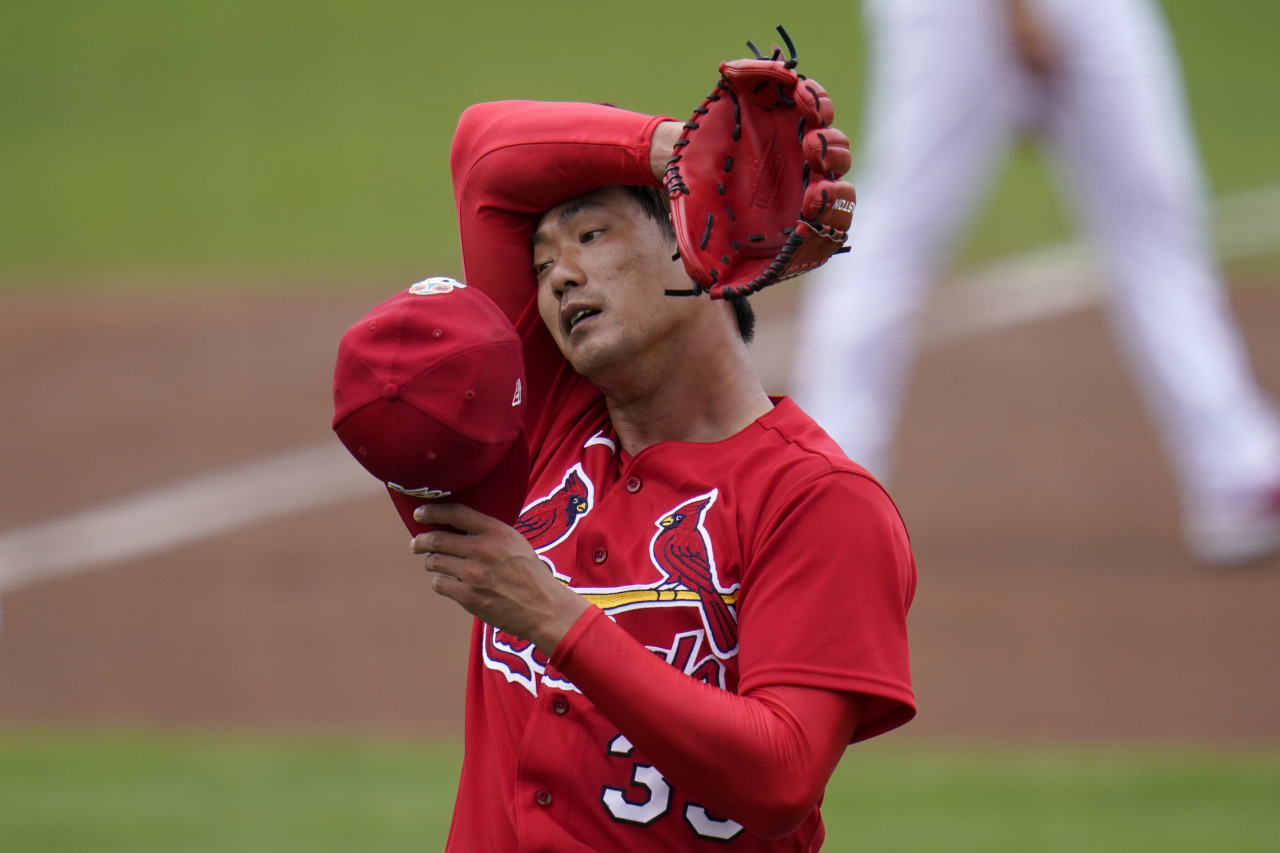 In this Associated Press file photo from March 3, 2021, Kim Kwang-hyun of the St. Louis Cardinals pitches during the top of the first inning of a major league spring training game against the New York Mets at Roger Dean Chevrolet Stadium in Jupiter, Florida. (AP-Yonhap)
Pitching in his first spring training game in nearly three weeks, Kim Kwang-hyun of the St. Louis Cardinals was undone by extra-base hits.

The South Korean left-hander served up two triples while giving up two runs in two innings against the Miami Marlins at Roger Dean Chevrolet Stadium in Jupiter, Florida, on Saturday (local time).

This was Kim's first preseason since March 8, when he was charged with four earned runs in 2 1/3 innings against the same Marlins.

While preparing for his next outing, Kim came down with a stiff back. He threw some bullpen sessions and a simulated game before returning to action by relieving starter Jack Flaherty in the fourth inning of Saturday's game.

Kim promptly gave up back-to-back triples, the latter one a run-scoring hit by JJ Bleday.

Jon Berti then hit a sacrifice fly for the second run of the inning off Kim, who got two groundouts to escape the inning after 18 pitches.

Kim, back out for the fifth, struck out Corey Dickerson swinging on a curveball in the dirt. He followed that up with a groundout before giving up a single against Garrett Cooper. Kim limited further damage, as Isan Diaz grounded out softly to second baseman Tommy Edman.

Genesis Cabrera took over to begin the sixth. Kim's spring ERA sits at 16.20, with nine earned runs in five innings.

Kim threw 35 pitches, 21 for strikes. In his previous game against the Marlins, Kim had been stretched out to 48 pitches.

Kim said afterward the one positive takeaway from his latest game was that he was able to pitch without fear of hurting himself again.

"Although I gave up consecutive triples to start my day, I had better command as the game went on," Kim said in his postgame Zoom press conference. "I was being careful because my back was hurting before, but after this game, I am no longer afraid."

Kim has allowed the first batter he faced to reach base in all three spring games so far and said he wants to address that issue moving forward.

"My arm feels better than last year, and it's just my back that's disrupted my buildup," Kim said. "I am trying to see it as a part of the process to have a strong season. I'll take it one step at a time and try to pitch well in the regular season."

Kim admitted he often experienced back pains after starts last year. The difference between now and then was that he recovered in time for his next outing in 2020, whereas his pain persisted this time around.

"I think I pushed myself two hard after struggling in my first two spring training games," said Kim, who allowed eight runs -- one unearned -- in three innings in those two games. "Now that I am pain free, I can afford to be more aggressive in my preparation."

Before the game, St. Louis manager Mike Shildt said Kim won't be in the rotation right away in the beginning of the season, but he also won't be in the bullpen as the lefty works his way back into form and builds up his pitch count. Shildt had previously said Kim's injury setback in spring training won't cost him a spot in the starting unit.

"We don't feel like pitching him out of the bullpen is really fair to him to start the season, nor to anybody that's going to be a starter," Shildt said in a Zoom session with the media. "We would consider that if the season was underway, to some degree, but not to start the season. He'll do it through a more traditional buildup to get his starts and be ready to take a starting spot sometime in April, we're thinking."

Kim will stay back in Jupiter after the Cardinals break camp and visit Cincinnati to open the season.

"I am thinking I may miss a couple of turns in the rotation at the beginning of the season," Kim said. "And once I rejoin the team, I'll try to make sure I won't get hurt again and put up good numbers." (Yonhap)