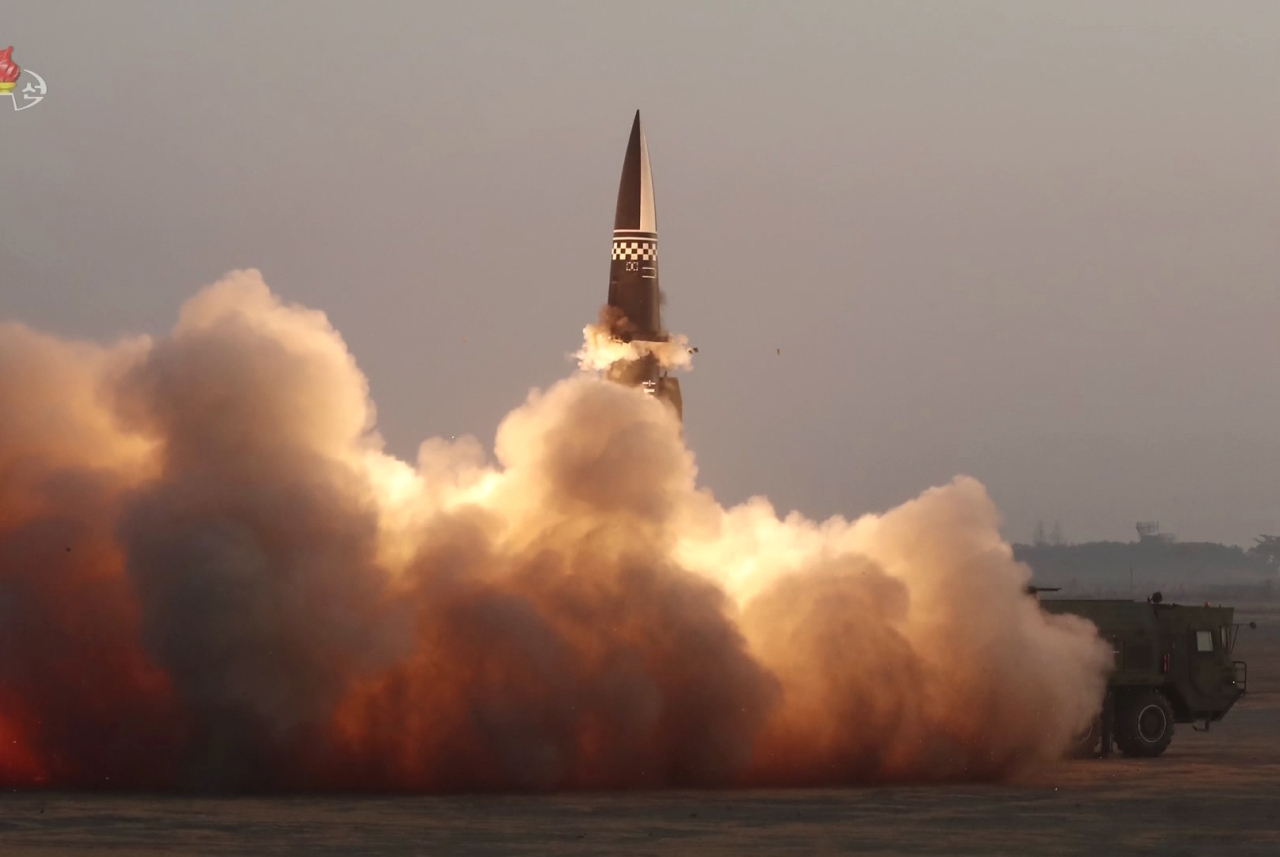 North Korea fires a ballistic missile into the East Sea, March 25, 2021. (KCNA-Yonhap)
The latest missile launches by North Korea are part of the regime’s accelerating cycle of provocations against the US as it seeks sanctions relief, experts said.

The North fired what appeared to be ballistic missiles into the East Sea on Thursday morning, a violation of the UN Security Council resolutions. It was the North’s second missile test since US President Joe Biden took office in January. On Sunday it fired two short-range cruise missiles into the West Sea.

“We believe they are two short-range ballistic missiles, and we’re still looking to verify that,” a senior official at South Korea’s Joint Chiefs of Staff said, referring to South Korean and US intelligence.

Cheong Wa Dae, which convened an emergency National Security Council meeting the same day, expressed “deep concern” over the missile launch, as the US is wrapping up its policy review on the North. Washington is expected to soon reveal new rules to discuss Pyongyang’s denuclearization.

“Provocations will follow, but there is no need to worry at this point,” a senior Cheong Wa Dae official said, noting Seoul and Washington had not been caught off guard by Pyongyang.

Thursday’s launch challenges the new US administration, which dismissed Sunday’s launch as “normal part of the kind of testing” by the North. Then the US highlighted dialogue with the North. They have not talked to each other since October 2019 because of differences over sanctions relief.

Experts said Pyongyang is calling out Washington on its new North Korea policy.

“The US slams the North on its rights abuses so publicly and co-sponsors a UN resolution to denounce the rights conditions. The North feels something’s up,” said Shin Beom-chul, director of the Center for Diplomacy and Security at the Korea Research Institute for National Strategy.

US Secretary of State Antony Blinken accused the North, which he called the “repressive government,” of condoning rights abuses a week ago when he was meeting with Korean counterparts in Seoul to discuss North Korea. On Tuesday, the UN adopted a resolution on the North.

Shin said the North is hinting at backlash at home the US would have to endure if the regime reaches the final stage of provocations involving an intercontinental ballistic missile. In 2017, Pyongyang first tested the weapon that could potentially reach the US mainland.

“President Biden would be under attack from former President Trump, who could and would put everything to blame on his successor. It’s more than a fall in ratings. The setback could eat up Biden’s foreign policy, at least on Asia,” Shin said, noting the North is playing on that fear.

Choi Kang, acting president of the Asan Institute for Policy Studies in Seoul, said the North would not go that far because that would be too risky.

“Pyongyang has neither the technology to pull another ICBM test nor the intentions to antagonize Washington beyond repair. A submarine-launched ballistic missile would be more prudent,” Choi said. Shin agreed with Choi but maintained an ICBM launch is not off the table for the North.

Choi added, “The next launch would come around mid-April when the North celebrates the ‘Day of the Sun’ to commemorate the birth of Kim Il-sung, the country’s founding leader.” He highlighted speed, noting the North will move quickly than usual to press the US to unveil something favorable.

Meanwhile, South Korea’s military came under scathing criticism that it had been too slow to respond to North Korea’s recent aggressions. The military confirmed the Sunday and Thursday launches only after they had made headlines in the US and Japan, respectively.

“We had been looking at the events in real time, and we wanted to be as accurate as we could possibly be. We intend to keep it that way,” a senior South Korean military official said. The launch location and flight range Japan reported were later found to be incorrect.