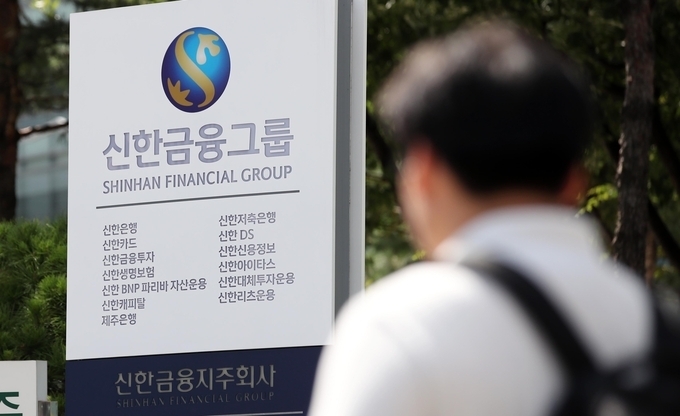 A pedestrian walks past Shinhan Financial Group headquarters in Seoul. (Yonhap)
Boardrooms of South Korea’s financial groups are facing criticism for defying pressures for change despite their failure in holding top executives responsible for exposing their operations to legal and financial risks.

Creating headwinds for Shinhan Financial Group and Woori Financial Group, which will vote on reappointments of inside and outside directors during shareholders meetings scheduled this week, are accusations that the current board members have been negligent in their oversight of their respective firms and caused a major setback in corporate governance. Both have been under heavy scrutiny for selling the fund products of the scandal-ridden Lime Asset Management.

The US-based Institutional Shareholder Services, the largest proxy advisory firm with over 1,700 institutional investor clients, opposed reappointments of Shinhan’s directors in its report to clients, according to a local media report Tuesday.

ISS urged shareholders of Shinhan Financial Group to vote against the reappointment of Shinhan Bank CEO Jin Ok-dong, who was proposed to keep his job as a nonexecutive director for the group.

It also advised shareholders not to support six outside directors to remain on the board for failing to perform their duties to oversee company operations. Their term ends after the upcoming shareholders meeting.

In February, the Financial Supervisory Service, the country’s financial regulator, notified Shinhan Bank that the CEO would receive the third-highest verbal reprimand for misselling derivative-linked funds that caused major losses for individual investors. If confirmed, Jin will be barred from financial jobs for the next three to five years.

Shinhan Financial Group said the reappointment of outside directors and its handling of the Lime fund scandal should be considered separately.

“I don’t think there’s a correlation between the two issues. We always prioritize professional capabilities when selecting outside directors while making improvements in what needs to be done involving the Lime scandal such as consumer protection,” an official said.

The fund fiasco sounded the alarm in the financial industry from banks to securities firms over their lax management and the absence of consumer protection systems, prompting the government to implement related laws to strengthen consumer rights.

Critics have been asserting that boards of directors should take more responsibility for corporate governance failures and fulfill their role objectively, as they are elected to represent shareholders and establish the execution of management policies.

The board of directors at Woori Financial Group also came under criticism for not dismissing the group’s Chairman Son Tae-seung from his post despite the financial authority’s punitive actions against him.

The FSS has notified Son, who was CEO of Woori Bank, of its intention to suspend him from his duties for misselling the controversial Lime fund products in 2018 and 2019. Woori Bank sold 357.7 billion won ($317 million) in Lime fund products, the largest amount among banks and securities companies that sold the products to consumers.