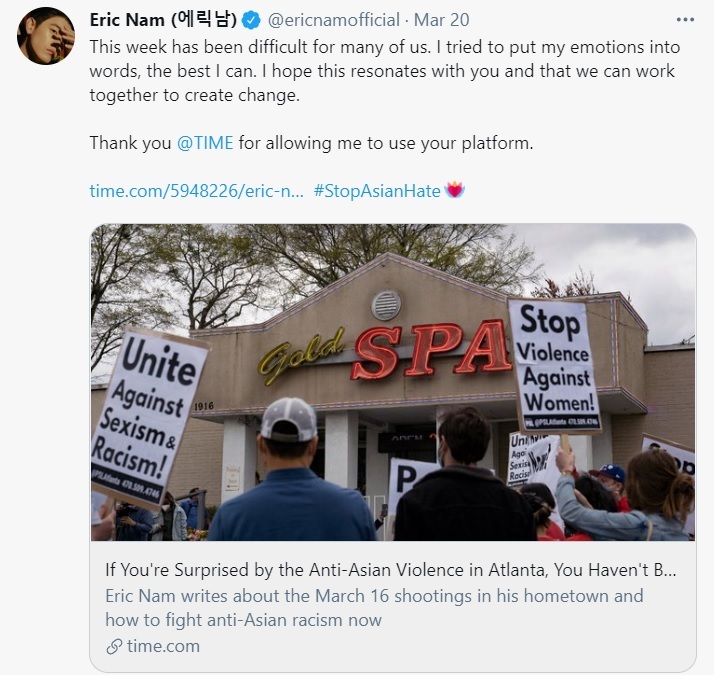 Singer Eric Nam’s opinion piece on Time magazine supporting #StopAsianHate (Twitter)
Korean celebrities and K-pop stars have joined the growing chorus of support for the #StopAsianHate movement, speaking out against the shootings in Atlanta, Georgia last week that killed 8 people, six of them Asian women.

Notably, Korean American singer Eric Nam, who was born and raised in Atlanta, wrote an opinion piece for Time magazine on Saturday, titled, “If you’re surprised by the anti-Asian violence in Atlanta, you haven’t been listening. It’s time to hear our voices.”

“As ‘perpetual foreigners’ and subjects of the model minority myth, Asians are invited but not fully integrated, or just largely ignored under the guise of being ‘O.K.’ in culture and politics. As AAPIs we have been excluded, interned, vilified, emasculated, fetishized and murdered,” Nam wrote in the article. AAPI stands for Asian Americans and Pacific Islanders.

“We are hurt, exhausted, full of sorrow and angry -- rightfully so. But we must continue to persevere. We must all continue to be active in creating the change that we so badly want and need for ourselves and our future generations,” Nam said.

Korean actress Kim Soo-hyun, who starred in Hollywood films “Fantastic Beasts” and “Avengers,” also voiced her support for the #StopAsianHate movement in a post on Instagram, while K-pop boy group Super Junior’s Siwon, Yesung and Donghae spoke out on social media.

“I am deeply saddened by the events that took place in Atlanta, Georgia two days ago. I certainly don’t have all the answers, but I would like to use my platform and emphasize this is an issue that needs to be addressed NOW and that ignoring it won’t help us. I know this one post won’t solve the problem, but I hope to help raise awareness on hate crimes against all. #stopracism #stophate #stopasianhate,” Siwon wrote in an Instagram post.

K-pop celebrities who were also vocal during the Black Lives Matter movement last summer, including Jay Park, CL of 2NE1, Tablo of Epik High, Tiger JK, Simon Dominic, Baek Ye-rin, Jackson of GOT7 and Amber of f(x), among others, all spoke up in reaction to the shootings.

“#StopAsianHate lend a hand or your voice. Check up on your Asian homies and their families. What’s happening is not ok. Spread Love not hate,” Jay Park said.

Meanwhile, Korean American celebrities in the US also stepped up over the weekend to condemn the recent surge in anti-Asian violence.

“I am proud to be Asian. I belong here,” Oh said during her speech at the rally.

In addition, actor Steven Yeun of Oscar-nominated film “Minari,” and the first Asian American to be nominated for Oscar for Best Actor, posted a link on his Twitter for Asian American and Pacific Islander mental health following the Atlanta shootings.