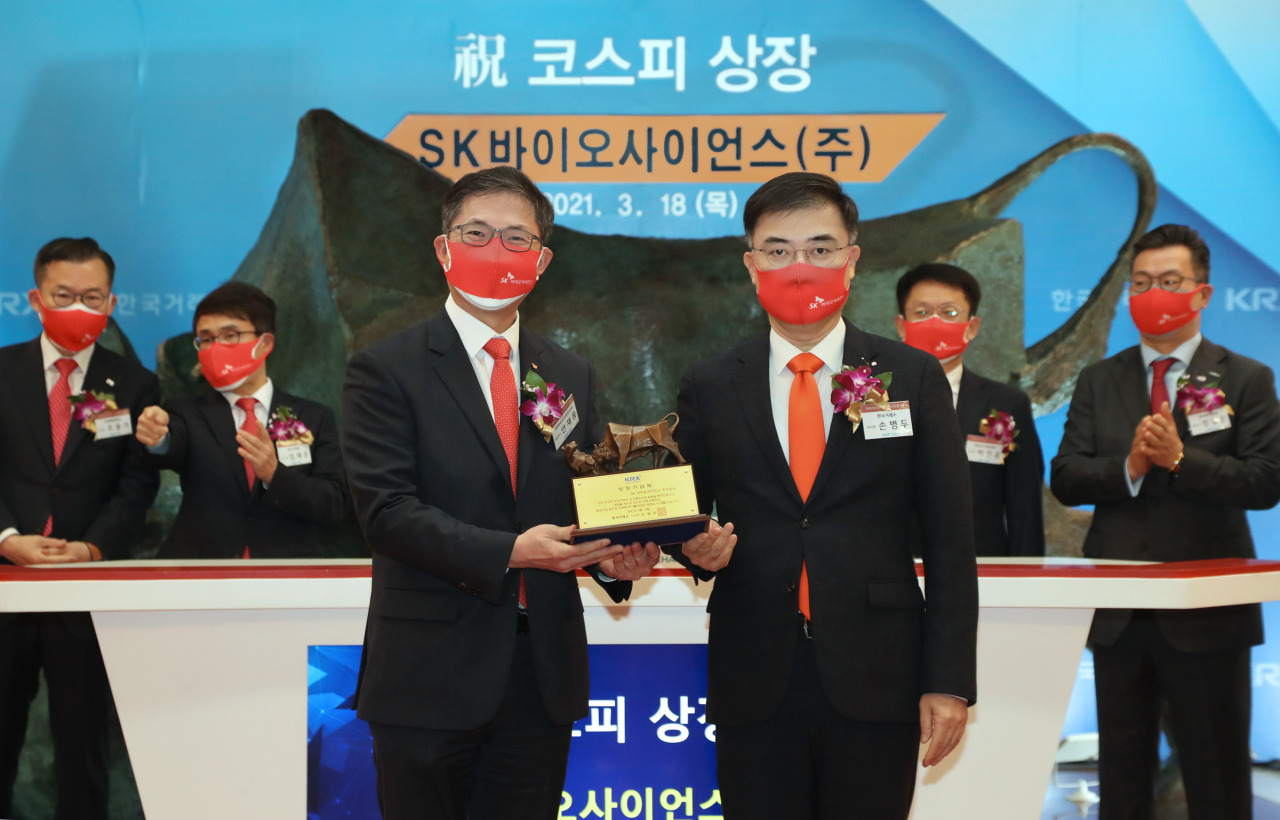 As soon as the opening bell rang, shares of SK Bioscience shot up to the daily permissible limit of 169,000 won ($150.45), up 30 percent from its opening price and its IPO price of 65,000 won. The price level maintained at the upper limit throughout the day.

The opening price of a newly listed stock is determined between 8:30 a.m. and 9 a.m. in the first trading session and it can reach up to 200 percent of its IPO price, according to the nation’s sole bourse operator Korea Exchange.

To celebrate the vaccine producer’s listing, the firm’s CEO Ahn Jae-young and its some 40 executives and staff members, representatives of its IPO underwriters and SK Discovery CEO Park Chan-joong joined a ceremony held at the KRX Seoul office in the morning.

“As promised during the IPO process, we once again pledge to manage business based on transparency and trust, at the same time, put much effort to communicate with the market actively,” Ahn said, adding that he anticipates the firm taking another step forward to become a global bio platform with its market size over 100 trillion won in the next 10 years.

SK Bioscience was launched as a spinoff from SK Chemical in July 2018. It has signed contracts with AstraZeneca and Novavax to cooperate in the production of COVID-19 vaccines at its plant in Korea.

With investors’ thirst for financial income and high market liquidity and their high expectations on the virus vaccine developments, SK Bioscience has been picked as one of the most anticipated local IPO deals this year.

At the two-day book building that wrapped up on March 5, the competition marked 1,275.47-to-1, the most competitive result among newly listing firms on the Kospi, fixing its share price at the top end of its indicative price range.

The shares were also oversubscribed 335.36 times as retail investors poured a record-breaking amount of deposits worth about 64 trillion won in the subscription bids. The previous all-time record was set by Kosdaq-listed Kakao Games with 58.55 trillion won in September last year.

Meanwhile, market watchers and investors are zeroing in on the firm’s stock movements as to whether it will extend a bull run for several trading sessions. After making stellar market debuts, SK Biopharmaceuticals shares previously spiked for a third consecutive session, while Kakao Games shares soared to the daily permissible ceiling for two days.