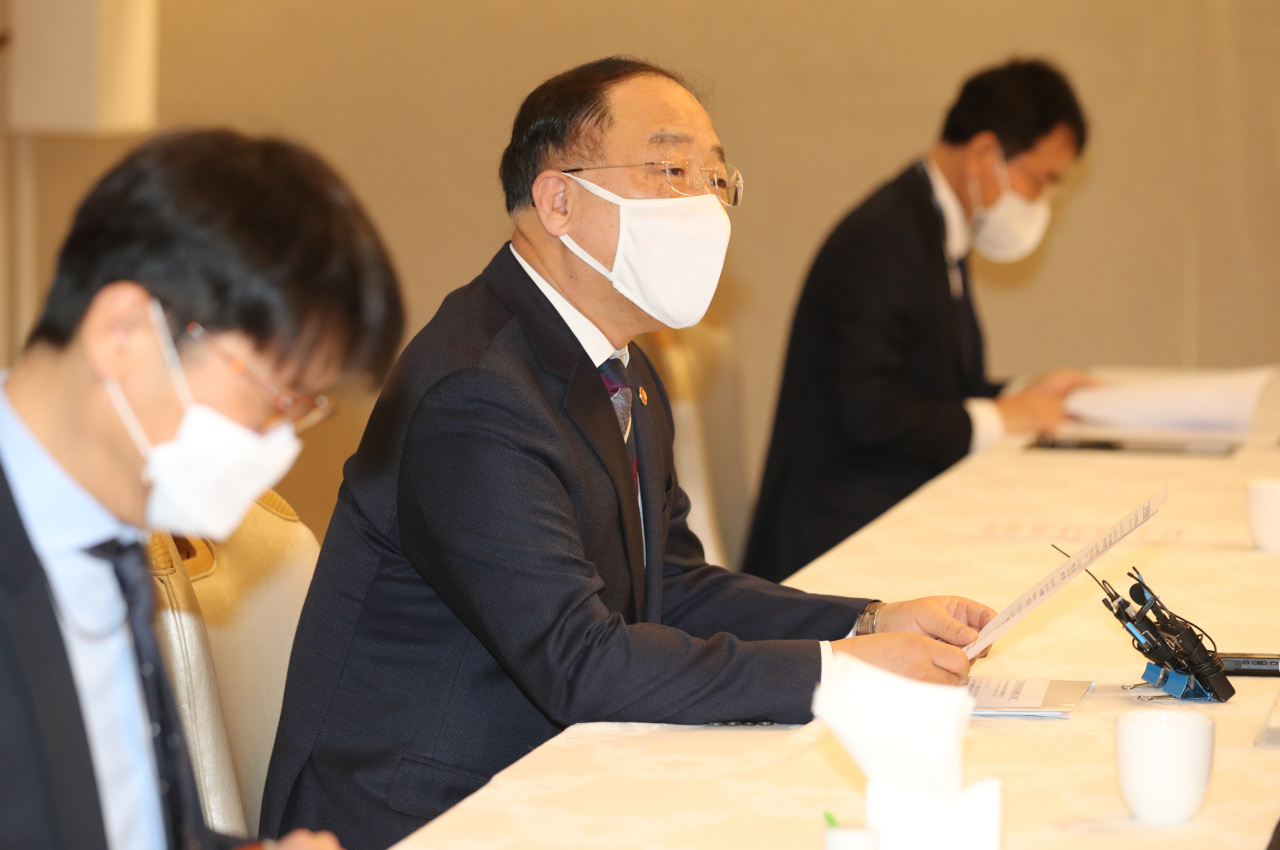 Finance Minister Hong Nam-ki, who doubles as the deputy prime minister for economic affairs, speaks during a meeting of related ministers at the government complex in Seoul on Wednesday, to check the country's real estate market and discuss policies aimed at stabilizing it. (Yonhap)

Finance Minister Hong Nam-ki on Wednesday expressed confidence in the recovery of the nation’s job market, despite pessimistic figures that showed the number of employed people declining for 12 months, marking the longest losing streak in 22 years.

According to Statistics Korea on Wednesday, 26.36 million people had jobs in February, a decline of 473,000 compared to a year prior.

But the fiscal chief asserted that the employment index would improve in March with the launch of the COVID-19 vaccination program and eased social distancing restrictions for some businesses.

Hong was indicating a slight rebound in February from a month earlier, not an on-year comparison, saying the growth could be attributed to the rise of employment in the services sector. Asia’s fourth-largest economy saw an on-year decline of 982,000 in January, which marked the biggest fall since February 1999.

“The number of employees in the manufacturing sector has improved for two consecutive months due to improved exports. The government’s employment project has also started in earnest and contributed to solving difficulties in the job market,” Hong wrote in a Facebook message.

The remark came after the statistics agency released data that showed a continued on-year drop in the number of hired people.

The labor force participation rate for those aged between 15 and 64 stood at 64.8 percent, having fallen 1.5 percentage points from a year earlier. The nation’s jobless rate increased by 0.8 percentage point on-year to 4.9 percent.

To offset private-sector job cuts, the government plans to create some 900,000 jobs in the first quarter through cooperation between the central government and local governments. As of the end of February, 787,000 people were taking part in the project.

Experts cast doubt on the effectiveness of the government’s job-creation strategy.

“The public sector job-creation scheme is only focusing on raising the number of employees. What the government provides is low-paying jobs for elderly citizens,” said Kim Dong-won, a former professor at Korea University.

Kim said the only way to increase employment opportunities was to ease regulatory burdens to make it easier for companies to build plants and expand their business here.

Meanwhile, the finance minister on Wednesday vowed to come up with measures this month to prevent any recurrence of land speculation by public officials.

Twenty employees of the state-run housing developer Korea Land and Housing Corp. are under investigation over possible involvement in suspicious land purchases.

They purchased property in Gwangmyeong and Siheung, both in Gyeonggi Province, before the areas were designated as major public housing development sites last month, allegedly misusing insider information.

The government has come under pressure as the land speculation scandal intensified public uproar over housing policies that have failed to curb soaring real estate prices.

“We will actively seek out measures to completely combat real estate speculation. … A comprehensive set of measures will be announced that will consist of ways to prevent, uncover and punish illegal, unfair practices,” Finance Minister Hong said.