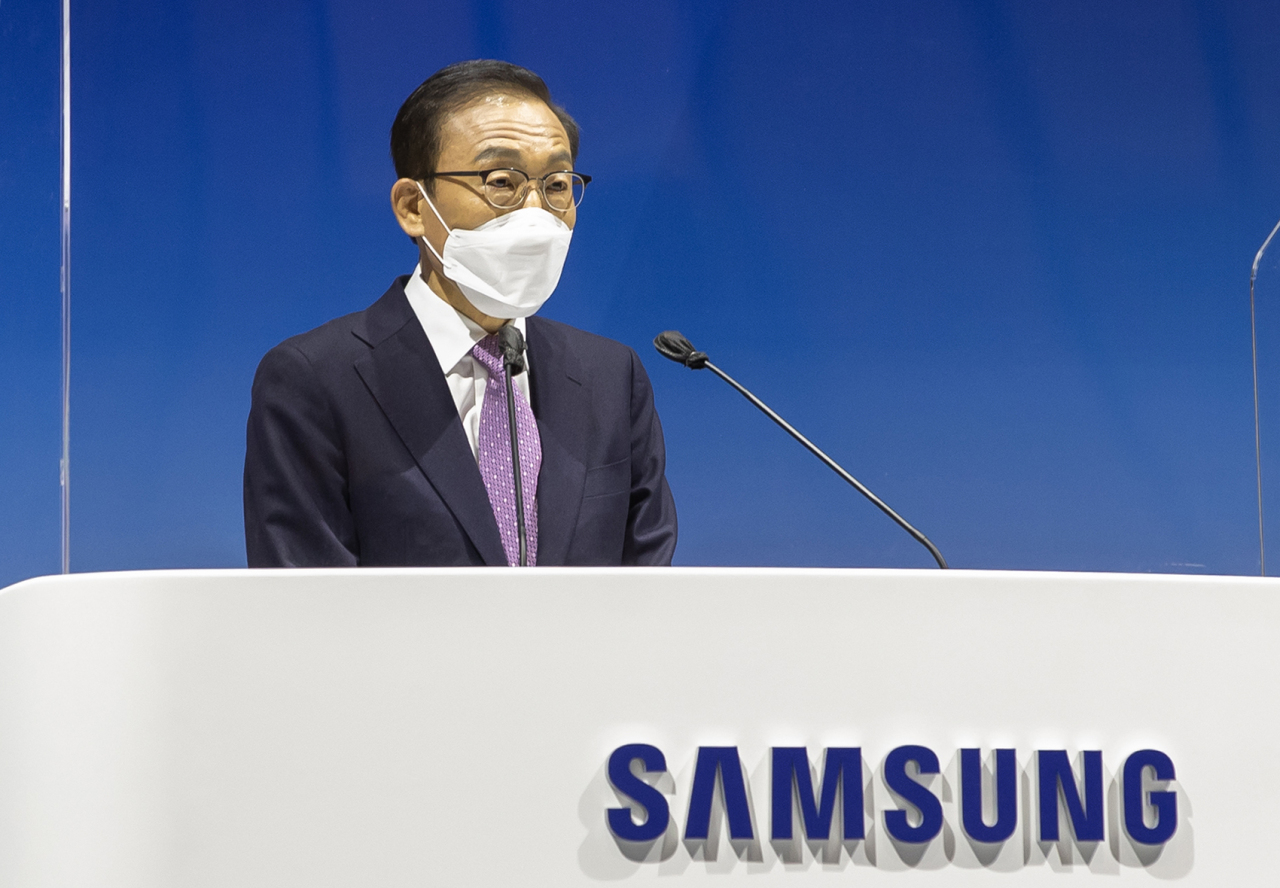 The number of attendees more than doubled from last year, when fears of the COVID-19 pandemic hit especially hard.

Samsung has hosted the shareholders meeting at the 2,000-seat Suwon Convention Center since last year. Previous meetings held at its headquarters building in Seocho-gu, southern Seoul, were overcrowded with over 1,000 shareholders attending there.

This year, due to social distancing rules, Samsung restricted the maximum number of seats to 1,200 with enhanced sanitation measures. The meeting was also streamed live for those who did not attend due to virus risks.

With its chief Lee Jae-yong unable to attend due to his imprisonment, the meeting kicked off in a tense mood, as some shareholders protested at the entrance of the meeting venue against maintaining Lee as the conglomerate’s leader despite his bribery conviction.

There has been growing criticism leveled at Samsung for maintaining the eldest son of late Chairman Lee Kun-hee as the vice chairman and de facto leader of the conglomerate after he was convicted of a bribery charge concerning former President Park Guen-hye in January. Under an economic crime act, businesspeople who are convicted of a crime are banned from working for their companies for five years.

Samsung’s external compliance monitoring committee, which is scheduled to hold a meeting Friday, will reinforce its monitoring and control on Samsung Electronics and other affiliates, Kim added.

Of the four items on the agenda for the meeting, reappointments of internal and external directors especially drew attention, as the US-based advisory firm International Shareholder Services had opposed their reappointments.

However, three independent directors -- Park Byung-gook, Kim Jong-hoon, and Kim Sun-uk -- were renamed as directors with higher-than-expected approval rates of around 80 percent.

Kim Sun-uk was also appointed as director of auditing with around 70 percent support.

All three Samsung CEOs -- Kim Ki-nam of the semiconductors business, Koh Dong-jin of smartphones and Kim Hyun-suk of consumer electronics -- maintained their posts as internal directors.

“Samsung will make efforts to achieve a scale of economy in the foundry business, while expanding its customer base in the non-memory market,” Kim said.

Compared to Taiwan’s TSMC and other leading SoC companies, Samsung has been late to enter the markets, Kim admitted.

“But Samsung does have the technological capabilities that can catch up with the leading companies, once the scale of economy is achieved,” he said. “To do that, efficient investment will be essential.”

Regarding Samsung’s mergers and acquisitions plans, the tech giant is still considering all options.

“Due to uncertainties at home and abroad, it is difficult to pinpoint the timing, but Samsung will prepare for an M&A deal as part of its efforts to discover new growth engines in a way that the company could reinforce one of the current businesses or create synergy,” Kim said.